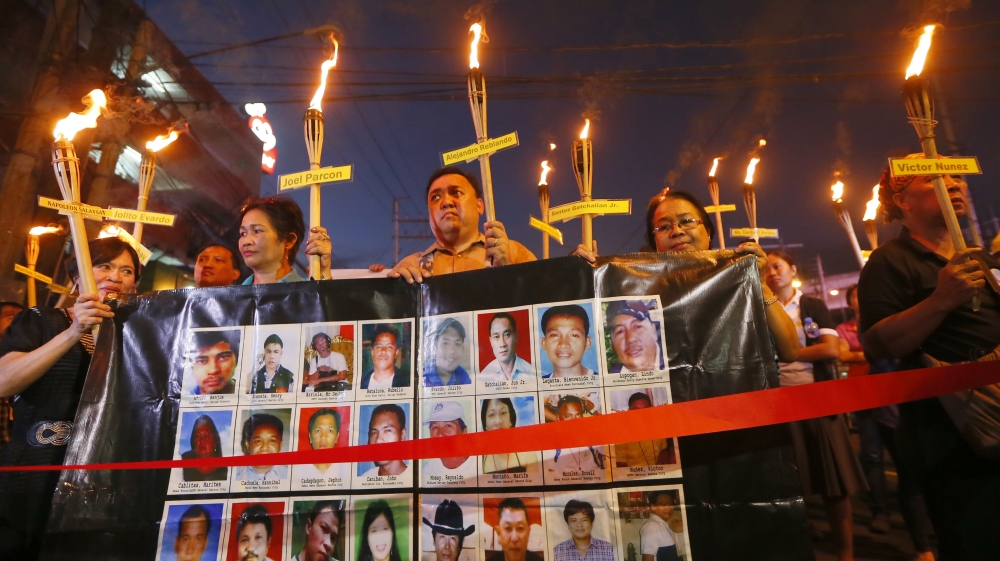 A Philippine radio broadcaster from the central island of Negros has been shot dead, becoming the third media worker slain in Dumaguete City since 2018 and the 16th nationwide since President Rodrigo Duterte came to office in June 2016. Cornelio Pepino was riding home from work on his motorcycle with his wife late on Tuesday…

A Philippine radio broadcaster from the central island of Negros has been shot dead, becoming the third media worker slain in Dumaguete City since 2018 and the 16th nationwide since President Rodrigo Duterte came to office in June 2016.

Cornelio Pepino was riding home from work on his motorcycle with his wife late on Tuesday when he was shot and killed, capping a turbulent 24 hours in the country’s media industry, which also saw the closure of its largest television network.

According to the police report obtained by Al Jazeera, two unidentified male perpetrators on a motorcycle shot and killed Pepino, also known as Rex Cornelio to radio listeners in the community.

Before fleeing, the attackers shot the victim once more in the head, according to a radio report quoting Pepino’s wife, Colen.

The 48-year-old Pepino was rushed to a nearby hospital where he was pronounced dead on arrival.

In a video, Colen, who was unharmed, was seen weeping and begging for help on her mobile phone, while cradling her bleeding husband who was slumped next to their overturned motorcycle.

The Philippines is one of the world’s most dangerous countries for journalists, with at least 186 media professionals killed since the country’s return to democracy in 1986, according to the National Union of Journalists in the Philippines (NUJP).

Media observers say the level of impunity has reached an unprecedented level since Duterte was elected president.

This latest media killing comes as the country is under lockdown due to the coronavirus pandemic. Across the country, police have set up several checkpoints, raising questions about how Pepino’s killers managed to flee.

In his afternoon radio programme, Pepino was known as a critic of corruption in local government in Negros. He had also criticised the distribution of allegedly overpriced food packs to communities affected by the coronavirus lockdown.

The management of the radio station where Pepino worked told Al Jazeera it was “saddened and angered by the senseless and brutal killing”.

While “hard-hitting” in his commentaries, colleagues were quoted as saying the victim never used profanity and would never flare up with emotion on the radio.

“Until the Philippine government shows it is serious about solving media murders, the vicious cycle of impunity will continue.”

The Dumaguete Press Club said the attack could be “politically motivated since politics was his favourite topic, which might have hit the nerve of some political sectors”, adding that “divine justice in all its forms will unmistakably come and be served”.

Meanwhile, the NUJP urged the Duterte administration to investigate the murder immediately.

“We demand justice for Cornelio Pepino, aka Rex Cornelio, and will continue to hold this government accountable for every death that remains unsolved.”

In a statement, Joel Egco of the Presidential Task Force on Media Security vowed that “justice will be served” and that police have been directed “to hunt down the suspects”.

“As in the past cases we handled, we will leave no stone unturned,” Egco said.

Maria Ela Atienza, professor of political science at the University of the Philippines, said that while the killing of journalists and targeting of media companies are nothing new in the country, “it got worse”.

“The level of impunity and the killing of journalists and critics has been pushed to a new level by the Duterte administration,” Atienza told Al Jazeera.

Since becoming president, Duterte has been known to denounce the press for critical coverage of his administration, including the deadly war on drugs that left thousands of people dead.

He had previously cursed foreign journalists for their reporting and said corrupt journalists are legitimate targets of assassination.

On Tuesday, the country’s largest media company, ABS-CBN, which was a frequent target of the president’s tirades, was forced to shut down after his allies in Congress refused to renew on time the station’s 25-year licence to operate.

The government had also filed charges against the Rappler website and its editor, Maria Ressa and forced the country’s largest newspaper, The Philippine Daily Inquirer, to sell the publication to billionaire Ramon Ang, a Duterte ally.

President Duterte, however, has repeatedly assured reporters that he welcomes questions from the media and that the country still has a free press.

“I have nothing against you. I am not at liberty to [be] angry at anybody,” said Duterte.

Atienza said that given Duterte’s popularity now as president, it is surprising that “the level of insecurity of his administration is so high it has to threaten and harass critics”.