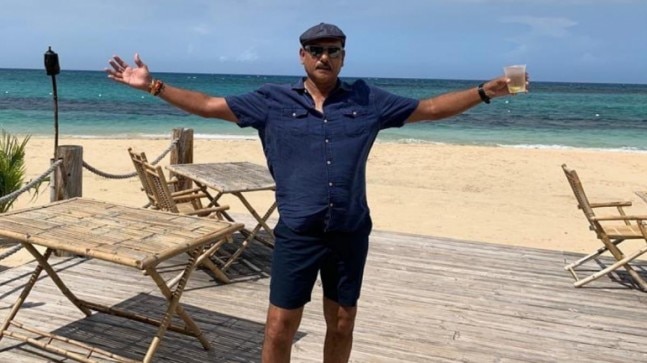 Ravi Shastri is spending time in Alibaug during the lockdown and picked two of his former teammates with whom he would have loved to hang out in quarantine. Ravi Shastri Instagram PhotoHIGHLIGHTSRavi Shastri is in Alibaug amid the nationwide lockdown due to Covid-19Shastri said he would love to have Roger Binny and Sivaramakrishnan as his…

Ravi Shastri is spending time in Alibaug during the lockdown and picked two of his former teammates with whom he would have loved to hang out in quarantine.

Team India head coach Ravi Shastri picked former cricketers Roger Binny and Laxman Sivaramakrishnan as the two partners he would have loved to have a beer with and hang around during the ongoing lockdown in the country.

Shastri is spending the lockdown at his home in Alibaug, which is in the orange zone. The former India all-rounder revealed that he was going to get a beer from the booze shop after lockdown rules were eased by the government of India.

There have been huge queues outside alcohol shops across the country ever since the shops opened on May 4 but Shastri said he will make sure to follow social distancing norms.

“Siva (Laxman Sivaramakrishnan), Roger (Binny) will be on the top of the list,” Shastri told India Today Consulting Editor Rajdeep Sardesai during the latest episode of Sony Ten Pit Stop.

“With the lockdown now, I’m past the red zone and am currently in the orange zone in Alibaug. I’m going to get a beer tonight, am sure there will be some shop open. And if I had to get 2 guys to get a beer with me I’m sure Roger would have joined me and so would Siva,” Shastri added when asked whom he would like to hang around with in quarantine from the Indian team of 1985.

Shastri was also asked about the sledging that was going on between him and Pakistan great Javed Miandad in the 1985 World Championship final.

Shastri revealed that Miandad was trying to distract him with constant chatter and sledging but nothing worked as he was totally focused on winning the match and getting the Audi car as the Player of the Tournament award.

“Javed had no chance of getting the Audi but he had to needle and make sure that I get distracted. When we played against each other there was constant chat.

“He was a great player and a great competitor… He would go to any level to try and make sure he got under your skin and distracted you. But he had no chance in that final because my eyes were on that car and even if he wanted to distract me, he had no bloody chance,” Shastri said.