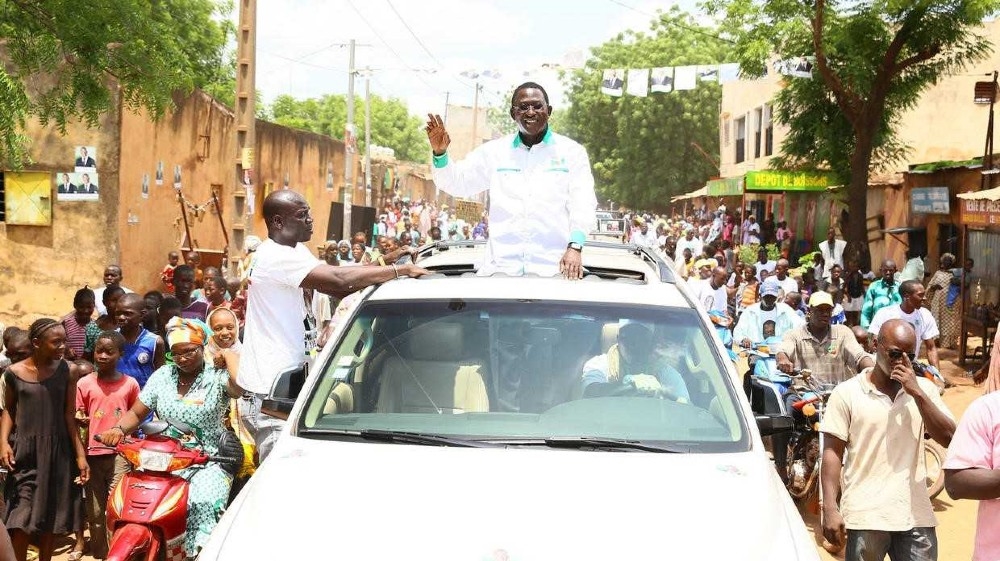 The family of a leading Malian opposition figure who was kidnapped days before the country's parliamentary elections in late March says the government is "moving too slow" in securing his release. Soumaila Cisse, the runner-up in a 2018 presidential election, was kidnapped by unidentified gunmen on March 25 in Mali's restive Timbuktu region. More: Polls…

The family of a leading Malian opposition figure who was kidnapped days before the country’s parliamentary elections in late March says the government is “moving too slow” in securing his release.

Soumaila Cisse, the runner-up in a 2018 presidential election, was kidnapped by unidentified gunmen on March 25 in Mali’s restive Timbuktu region.

The 70-year-old’s son, Bocar Cisse, said it was more than five weeks after the kidnapping when the family was contacted by the committee set up to negotiate the politician’s release.

“They say they are negotiating, but when we ask them for more information they don’t tell us anything,” Bocar Cisse said. “We don’t know anything, we don’t know if he is dead or alive,” added the 40-year-old, speaking on behalf of his mother and three brothers.

“Everyone misses him; we are all lost.” Cisse has been missing since his abduction in late March [File: Annie Risemberg/Reuters]

Two people kidnapped alongside Cisse – who were later released – said they had also not heard from the committee, which was appointed weeks after the abduction, according to documents seen by Al Jazeera.

Speaking from Ivory Coast, Bocar Cisse said his family last heard from this father on the afternoon of March 25 as his two car-convoy left the city of Niafunke, a stronghold for his Union for the Republic and Democracy party (URD), and which lies on the cusp of northern and central Mali.

He was on the campaign trail before the March 29 legislative elections but was venturing into an area which is largely out of bounds to state authorities and where armed groups are known to roam.

As the cars passed through a small forest, masked attackers opened fire, dragged the passengers out, blindfolded them and placed them under a tree. Cisse sustained a hand injury from the shattered car windows, while his bodyguard received a gunshot wound and later died. Six others injured in the shooting were released immediately, while nine people, including Cisse, were abducted.

Over the following days, the kidnapped men were moved between hideouts and slept out in the open. At times, they heard the sound of gunfire but insisted they were not mistreated, according to the two released men whose names have been changed to protect their identities.

“We cannot say where it was exactly because we don’t know that area and our eyes were covered,” Mamadou* told Al Jazeera.

On the morning of March 29, Cisse was led away from the other eight kidnapped men, who were later released. Two days later, the Malian government appointed former Prime Minister Ousmane Maiga to head a “crisis unit” and said in a statement that it was prepared to “make every effort” to secure his release.

However, Cisse’s whereabouts are unknown to this day.

“They’ve given us very little news, and we’re not sure that they are in contact with the kidnappers,” Bocar Cisse said.

“We have been expecting him to be free a long time ago. Nothing has happened; the government is moving too slow,” he added.

Kidnap survivors have also been left in the dark. “I have not met this commission, I have never seen them, I have not talked to them,” Mamadou said.

Samba*, who was also abducted, said: “Since we’ve been freed, nobody has contacted us or called to see if everything is OK.” ‘Nothing is happening, the government is moving too slow,’ says Bocar Cisse after more than a month since his father’s kidnapping [File: Courtesy Soumaila Cisse’s family]

According to a government document signed by Prime Minister Boubou Cisse and seen by Al Jazeera, it took until April 21 for the government to appoint staff to the crisis committee, who were mainly bureaucrats and security personnel.

On April 8, the United Nations Security Council called for Cisse’s “swift liberation”, while in an April 22 letter, 42 African intellectuals and politicians said the abduction of such a high-profile figure was “unprecedented and unique” and called for “stronger involvement” from Malian President Ibrahim Boubacar Keita to secure his release.

Mali’s government did not reply to requests for comment. Last week, during a meeting between the G5-Sahel – a regional counterterrorism force – and the European Union, Keita said: “Everything is being done to bring him [Cisse] back home safe and sound”.

Despite the kidnapping, threats of violence and fears over the spread of the coronavirus, Mali’s legislative vote went ahead as planned on March 29, with Cisse winning his seat comfortably in the first round.

Days later, Amadou Oumar Kalossi, the URD mayor of Koumaira – the city Cisse was heading to when he was kidnapped – was abducted while trying to negotiate his release. He is still missing.

Bocar Cisse is left in little doubt that his father and his party have become targets but does not know why. He said his father has no known enemies.

Cisse is a stalwart of Malian politics, having finished as runner-up in three presidential contests, and has received plaudits for peacefully conceding defeat each time.

In recent years, Mali has been facing a worsening security situation. What began as a localised revolt in the country’s north in 2012 soon spread to the centre of the country and then to neighbouring Niger and Burkina Faso.

The conflict has exacerbated ethnic tensions and local grievances over poverty and the absence of the state, giving rise to ethnic militias and bolstering support for armed groups, some of which are linked to al-Qaeda and the ISIL (ISIS) group.

A French military intervention, military campaigns by national armies and one of the UN’s largest peacekeeping forces have failed to stem the violence, which killed 4,000 people in the three countries last year and displaced hundreds of thousands, according to UN figures.

Ibrahim Maiga, a Bamako-based researcher for the Institute for Security Studies, said Cisse’s assailants might have ties to Katiba Macina, a local group linked to al-Qaeda and that the politician would be considered a valuable pawn amid continuing negotiations between the government and senior fighters aimed at finding a settlement to years of conflict.

Without an official claim of responsibility, however, Bocar Cisse was less sure. “They didn’t ask for money, or for prisoners; they didn’t even make a statement saying that it was them.”

Maiga said the silence from the government and captors might be down to strategy. “In this kind of situation, it is maybe wiser to make less noise, to negotiate in discretion. When it becomes publicised, it becomes more difficult to solve,” he told Al Jazeera.

Bocar Cisse said his father’s absence has been made all the more difficult by the start of the Muslim holy month of Ramadan. “When my father is at home, he breaks fast with his family and spends time with them,” he said.

“It’s a different feeling now. We don’t know when this nightmare will end.”

* Name has been changed to protect the person’s identity