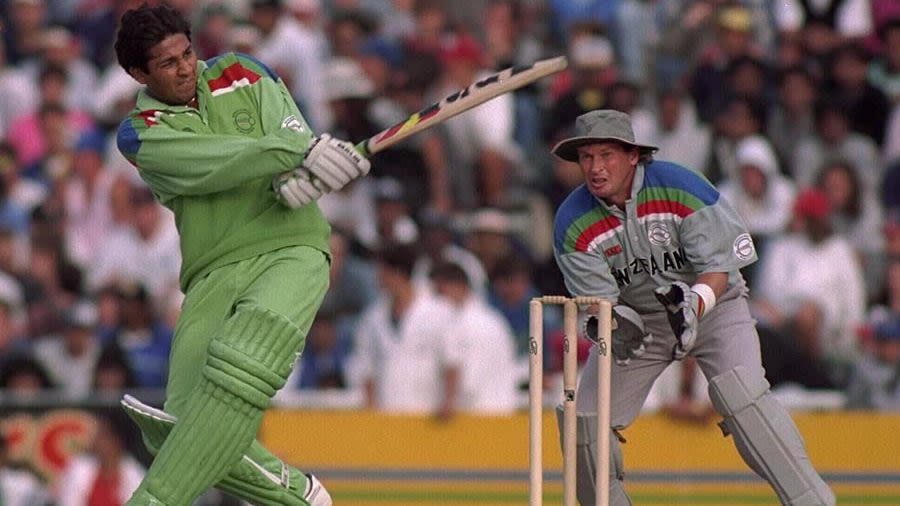 They lost three of their first five matches, and should probably have lost a fourth too, when England bowled them out for 74. Rain saved them there, and gave them an underserved point, a point that was eventually critical to their progress into the last four of this World Cup.

But don’t take anything away from Pakistan for what they’ve done since that early run. They beat Sri Lanka, Australia and New Zealand on the bounce to reach the semi-finals. And now they’re in their first World Cup final, having pulled off a sensational chase to dump out New Zealand, the co-hosts and league-table toppers, on their own turf.

They’ve pulled off the fourth-biggest successful chase in any World Cup match. Of the three above it, two came in 60-over matches, and the third against an Associate side, Zimbabwe. And none of the top three chases came in a knockout match.

It was challenge enough for Pakistan to chase 263. When Imran Khan and Saleem Malik fell in the space of five balls, their task had grown immeasurably more difficult: 123 needed off 95 balls, with six wickets in hand.

It was here that Inzamam-ul-Haq, all of 22, with only 15 ODIs behind him, joined Javed Miandad at the crease. Inzamam wasn’t unknown or unproven at this level; he’d scored back-to-back ODI hundreds against Sri Lanka earlier this year. But this had been a quiet World Cup for him up to this point, and this was a semi-final.

For a player of quality, though, a semi-final is a cricket match like any other. And Inzamam is most definitely a player of quality. How else do you score a half-century in 31 balls while exuding the air of someone taking a leisurely stroll around the neighbourhood, pausing occasionally to chomp on an apple?

It wasn’t an in-your-face explosion of sixes and fours. There were moments of sublime timing, such as when Inzamam stepped out to Gavin Larsen and sent the ball racing to the midwicket boundary with the gentlest of nudges, and shots that hinted at supreme judgment of length, such as a pulled four off a Chris Harris delivery that was only marginally short. But more than all that, it was an innings of awareness, of where the gaps were and how to find them; to that end, his best shot was probably a dancing flick over midwicket off Willie Watson, which landed in a wide, unguarded area to the left of deep square leg and allowed him to run three.

There was some poor bowling too; Harris kept floating the ball wide of off stump when the batsmen advanced at him, with no sweeper protecting the off-side boundary. Inzamam and Miandad threaded fours through the off-side infield once each in successive overs. Dipak Patel, the offspinner, kept bowling into Inzamam’s sweeping and pulling arc despite leaving a massive gap between deep backward-square leg and deep midwicket.

Inzamam, in truth, was showing up a limited New Zealand attack for what it was. Their dibbly-dobblers – Harris, Larsen and Watson – have been unhittable at times during this World Cup, especially on the slower pitches in New Zealand, but there’s a sameness to this attack, and a lack of genuinely attacking bowlers apart from Danny Morrison.

Once Inzamam and Miandad brought the required rate back under control with an 87-run partnership off 63 balls, New Zealand needed a couple of quick wickets to bring themselves back in the match, and lacked the bowling firepower with which to do it.

Their fielding could have brought them a couple of wickets, though. Two direct hits from Harris had Miandad – batting on 1 at that stage – and Moin Khan – on 5, with Pakistan needing 16 off 16 with four wickets in hand – scrambling for safety. Replays showed both of them marginally, but clearly, short of their crease. There was no way the square-leg umpire could have given either of them out, but with technology playing an increasingly influential role at this level, expect video umpires to make an appearance soon.

Who knows what might have happened had Miandad been run out so early, with Pakistan needing 177 off 161 balls. The fallout of Moin’s non-dismissal was clearer; he’s still new to this level, but he showed Miandadesque calmness and smarts in helping the senior man finish off the match, and clubbed a pair of unorthodox, Miandadesque boundaries to seal the deal.

That Pakistan had needed to hustle to such a degree at the finish was down to their turgid scoring through the first two-thirds of their innings, which was largely down to Imran Khan’s struggle, after promoting himself to No. 3 once again, to pierce the field, and, on occasion, to put bat to ball. It lasted 93 balls, and brought him only 40 runs, 12 of them coming in two hits.

A similar struggle took root at a similar stage of New Zealand’s innings, after they had chosen to bat first with a grim forecast in mind. Mark Greatbatch, as he has done through this tournament, clubbed a couple of early sixes, before failing to pick up a back-of-the-hand slower ball from Aaqib Javed that spun like a googly. John Wright and the No. 3 Andrew Jones struggled to time the ball, though, and Ken Rutherford, batting at No. 5, took an age to get going, remaining scoreless for 20 balls, and taking 43 balls to reach double figures.

If it wasn’t for the in-form Martin Crowe, who moved his feet with precision and timed the ball like a dream from the moment he stepped in, New Zealand’s innings could have come to a complete standstill. Mushtaq Ahmed, who had returned figures of 2 for 18 in 10 overs in the league-stage meeting between these sides, dismissed Jones with a brilliant quicker one, and gave Rutherford a torrid time as well, and with Pakistan’s second legspinner, Iqbal Sikander, starting tidily as well, New Zealand crawled to 119 for 3 in 34 overs. Getting to 220 looked unlikely.

But as if a switch had been clicked on, Rutherford suddenly found his rhythm, and his feet began to twinkle against the spinners, bringing him a series of boundaries including a straight six off Sikander. Crowe, like Inzamam would do later in the match, began punishing the smallest errors in line and length, sweeping and pulling the spinners at every opportunity, and whipping Wasim Akram for a stupendous six off his hip, over backward square leg. Crowe raced to his fifty in 51 balls. Rutherford flew from 17 off 47 balls to 50 off 67, before a miscued pull off Akram ended their partnership at 107.

New Zealand’s innings had legs now, but their captain’s legs gave way in the 44th over, Crowe injuring his left hamstring while taking a single off Sikander. On 79 then, he would add 12 more to his score, before a mix-up involving his runner, Greatbatch, sent him back in the 47th over, right after another brutal pull off a barely-short delivery had moved him into the 90s.

Crowe’s injury didn’t have any immediate effect on New Zealand’s morale, with Ian Smith leading their plundering of 40 runs off the last 22 balls of their innings. But their tactics during Pakistan’s innings lacked the Crowe stamp. Rather than swap his bowlers around constantly as Crowe has done through this tournament, the stand-in captain Wright kept his bowlers on for long spells, refusing to use Jones’ offspin as a sixth option. With Inzamam new to the crease, he delayed the reintroduction of Morrison, who had four overs left, and kept plugging away with his slow-medium trio.

It’s hard to say, though, that this same New Zealand attack, shuffled into a different configuration, could have dealt with Inzamam in the mood he was in. Today was simply his day, and this tournament may simply be Pakistan’s, though England or South Africa may have something to say about that.