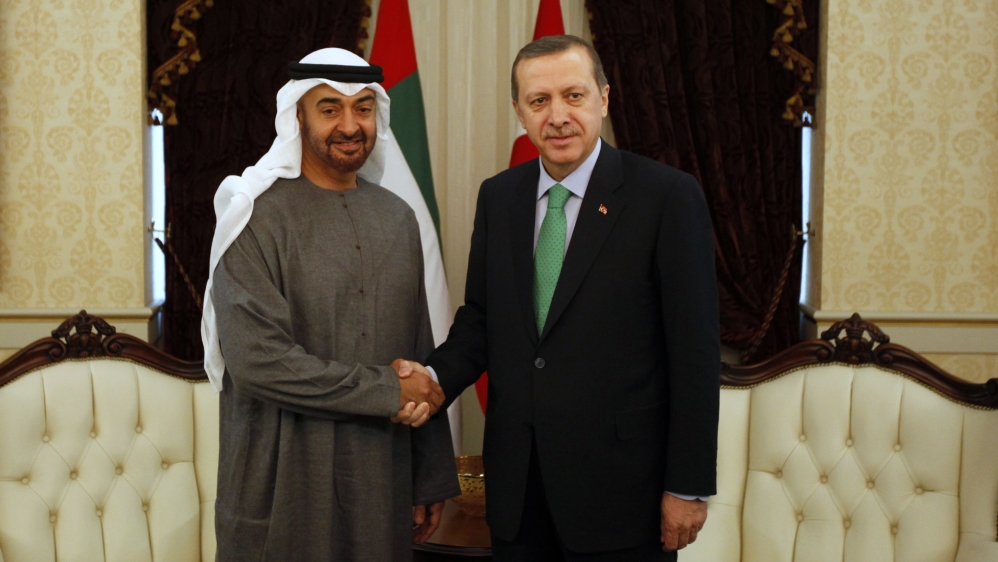 Diplomatic tensions between Turkey and the United Arab Emirates (UAE) have resurfaced once again after the two sides were engaged in a war of words over the crisis in Libya. In a statement issued on Thursday, the UAE's Ministry of Foreign Affairs and International Cooperation expressed its concern over Turkish interference in Libya through the alleged…

Diplomatic tensions between Turkey and the United Arab Emirates (UAE) have resurfaced once again after the two sides were engaged in a war of words over the crisis in Libya.

In a statement issued on Thursday, the UAE’s Ministry of Foreign Affairs and International Cooperation expressed its concern over Turkish interference in Libya through the alleged deployment of fighters and smuggling of arms.

Responding to the criticism, Hami Aksoy, the Turkish foreign ministry spokesman, accused the UAE of pursuing “destructive” and “two-faced” policies in the region and called on Abu Dhabi to stop its “hostile attitude” towards Ankara.

Aksoy said the UAE was backing “putschists” in Libya – a reference to the LNA – by providing them with arms and mercenaries. He called on the Gulf state to “stop funding forces against the international peace, security and stability” in places such as Yemen, Syria and the Horn of Africa.

Turkey supports the Tripoli-based Government of National Accord (GNA) and has signed a military cooperation agreement with it to help the fight against Haftar’s LNA, backed by the UAE and its ally, Saudi Arabia.

Last year, the LNA started a military operation to remove the GNA from capital Tripoli but has not made much progress till now.

Turkey and the UAE have supported the opposing sides in several continuing and past issues in the Middle East, with the crisis in Libya, the Syrian civil war, the coup in Egypt, and the murder of Washington Post columnist Jamal Khashoggi being some examples.

Turkey has also accused the UAE of killing civilians and causing a humanitarian crisis in Yemen, intervening in the affairs of the Palestinian Authority (PA), and financially supporting the 2016 coup attempt in Turkey.

Ankara’s backing of the Arab Spring rebellions, which began in 2011, angered Saudi Arabia and the UAE who considered the move as a threat to their national stability.

They see it as a zero-sum game, in which there is no way for both sides to win.

In Egypt, Turkey supported the democratically-elected President Mohamed Morsi, backed by the Muslim Brotherhood before and during the coup in Egypt.

Ankara also backed the anti-government protests and later the rebel movements against President Basher al-Assad in the Syrian crisis.

The UAE, together with Saudi Arabia, have supported al-Assad in Syria and Egypt’s Abdel Fattah el-Sisi, who overthrew Morsi in 2014 and has been an ally of the two Gulf states since then.

“The rivalry between the two sides mainly stems from Turkey’s support for Arab Spring uprisings and the Muslim Brotherhood movement, which were viewed as threats by the UAE and Saudi Arabia,” Sinan Ulgen, former diplomat and chairman of Istanbul-based Centre for Economics and Foreign Policy Studies (EDAM) think-tank, told Al Jazeera.

“But the problems between the sides have gradually grown through a series of issues of disagreement over the years,” he said.

“As time passed and issues piled, Turkey and the UAE engaged in a regional power struggle. They see it as a zero-sum game, in which there is no way for both sides to win. If one wins, other one loses.”

The Gulf crisis has been one of the central issues behind the tensions between Turkey and the UAE.

In June 2017, Saudi Arabia, the UAE and Bahrain, along with Egypt, severed political, trade and transport ties with Qatar, accusing it of “supporting terrorism” in the region – a charge repeatedly rejected by Doha.

The four Arab countries continue to impose a land, air and sea blockade against Qatar.

Turkey has staunchly supported Qatar in the crisis, enhancing its political, economic and military relations with the Gulf state.

Hours after the blockade was imposed, which included Saudi Arabia closing Qatar’s only land border, Turkey sent planes full of supplies to avoid a food shortage in the country, which mainly relied on import of essential commodities.

Ankara also set up a military base in Qatar, deploying thousands of soldiers, to ensure the safety of the country.

Ulgen told Al Jazeera Ankara’s stance has been “sharp and clear” in favour of Qatar during the Gulf crisis.

“Turkey has not sought to have a balanced stance between Saudi Arabia-UAE camp and Qatar. It did not try to manage the situation in a way to protect its ties with Riyadh and Abu Dhabi, but threw its total weight behind Qatar right away,” he said.

Separately, Ankara has offered a reward for any information leading to the arrest of Mohammed Dahlan, a former Palestinian Fatah party official currently in exile in the UAE.

Ankara accuses 58-year-old Dahlan of involvement in the failed 2016 coup through the UAE’s support and placed him in the “most-wanted list” late last year.

In an interview with Al Jazeera in October, Turkish Foreign Minister Mevlut Cavusoglu had accused the UAE of harbouring “a terrorist”.

“[Dahlan] fled to you because he is an agent of Israel,” he said, accusing Abu Dhabi of attempting to remove the PA President Mahmoud Abbas by using Dahlan.

Dahlan was expelled from Fatah’s ruling body in 2011 over allegations of plotting to overthrow Abbas and has been living in exile in the UAE since 2012.

On its part, Abu Dhabi has condemned Turkey’s operations in northern Syria, calling them moves against the sovereignty of Syria – a criticism rejected by Turkey.

Turkey has carried out three operations in the region in recent years to clear its border of what it calls “terrorists” and create safe areas to resettle more than three million Syrian refugees it hosts.

Ankara has also promised to leave the land it controls in northern Syria once the crisis is resolved.

A recent report suggested the UAE made many attempts to get al-Assad to break a ceasefire reached between Syria and Turkey through mediation by Russia, the foremost ally of the Damascus government.

According to the report, the UAE offered $3bn in return for the move.

In March, Turkish prosecutors indicted 20 Saudi nationals over Khashoggi’s killing at the Saudi consulate in Istanbul in 2018.

However, Turkish President Recep Tayyip Erdogan said the killing was ordered at the “highest levels” of the Saudi government.

According to Ulgen, there is a difference between Turkey’s approach towards the UAE as compared with Saudi Arabia.

“There are deeper economic, cultural and political ties between Turkey and Saudi Arabia than the UAE. Even after the murder of Khashoggi, Riyadh and Ankara did not sever ties. We can see it also in Saudi Arabia’s approach to Turkey, which is more careful than the UAE’s,” he said.