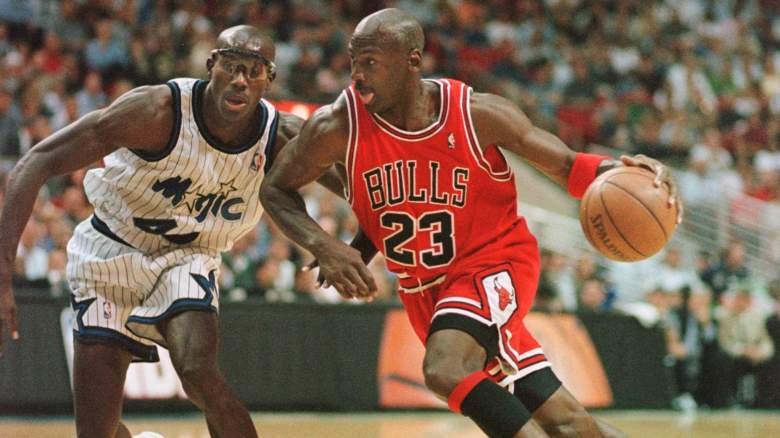 The number ‘23’ has a lot of significance in the world of basketball. Currently we see LeBron James donning the number on his Lakers jersey. However, the man who made the number seem godly is Michael Jordan. The six-time champion wore the Number 23 for most of his career and it was a special number…

The number ‘23’ has a lot of significance in the world of basketball. Currently we see LeBron James donning the number on his Lakers jersey. However, the man who made the number seem godly is Michael Jordan. The six-time champion wore the Number 23 for most of his career and it was a special number indeed.

We see a lot of players giving specific numbers immense recognition by wearing it behind their jersey. Kobe Bryant’s 8 and 24 are immortalized by the Lakers while Dwyane Wade’s number 3 jersey is widely famous. But, the inception of all these players picking their perfect number began when ‘His Royal Airness’ decided to make the number 23 the most popular jersey number in the world.

The major reason why Michael Jordan picked the number 23

Air Jordan grew up loving the number 45. His childhood basketball days saw him wearing the number 45 on his jersey. He was crazy about the number and it meant a lot to him. MJ had an older brother who was also a basketball player. Naturally, they both were really competitive, as it runs in the genes. Both of them played with the same number for their respective teams, growing up.

However, there came a moment when Jordan played for his school’s varsity team alongside his brother Larry. Obviously both players could not play with the same number and one had to compromise. A young and high-flying Jordan chose to withdraw from the contention for the number 45. Instead, he had a crazy idea to halve the number and make it 23 which was the closest to 22.5. He loved it ever since. Michael Jordan carried the number everywhere he went. He wore the number 23 jersey in his North Carolina team and brought it to the NBA as well. The GOAT believed that the number gave him extra powers, and he had a reason to assume that way as well. He rocked the NCU and ended up as the number three pick in the 1984 NBA draft.

The jersey number 23 won six-NBA titles and final MVP awards and five regular-season most valuable player honors. If you hear the number 23, you think of Jordan. He made it his own. It feels like he bought something which nobody really can. For basketball fans, the number 23 immediately triggers the memories of Jordan’s elegant style.

Why did MJ return with the number 45 post his first retirement?

When the Jumpman took his first 18-month retirement from the NBA, he ventured into playing baseball. The main reason was due to his father’s death. He wanted to see his son playing in the MLB. His demise impacted Jordan largely and made him to try and fulfill his father’s wish.

MJ wore the number 45 in his brief stint with Minor League Baseball. Upon leaving behind the idea of surging to the top in the sport, he returned to keep doing what he does best. Coming into the Chicago Bulls side in 1994, he chose to avoid the number 23, and picked his childhood number of 45. In his book, he wrote, “When I came back, I didn’t want to play in the last number that my father had seen me wear. “Because he wasn’t around, I thought of my return as a new beginning.”

A rusty comeback saw Jordan eliminating the number after 22 games. He felt the number never stuck with him. His success in the NBA had come from the number 23, and the 45 was new to the NBA and weighed him down a bit.

“When I came back, I thought 45 was perfect because I did have an association with the number,” Jordan said. “Bad luck. It didn’t take long for me to change back to 23. It was part of me, but not in the professional basketball environment.”