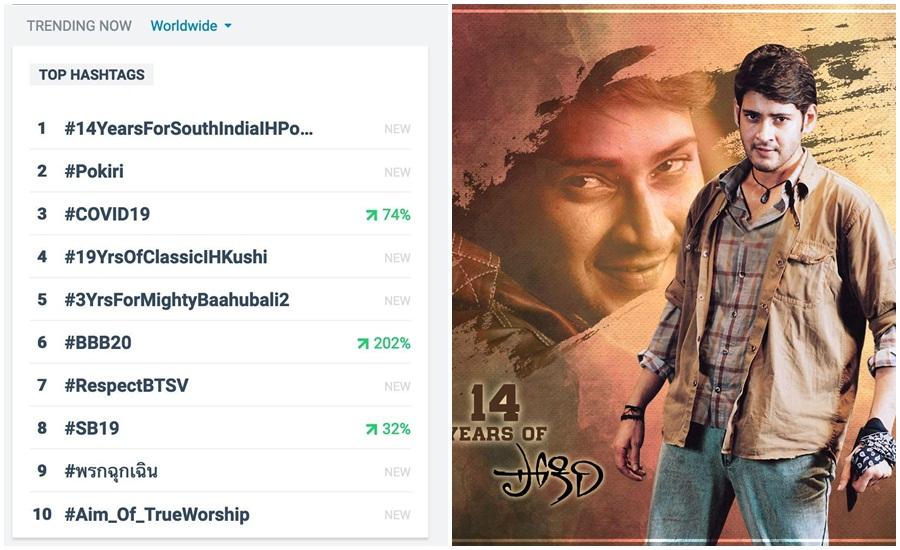 Mahesh Babu fans tended #14YearsForSouthIndiaIHPokiri on top of Twitter on the 14th anniversary of Pokiri, which pushed down Pawan Kalyan’s Kushi and Baahubali 2 to fourth and fifth ranks.

Mahesh Babu fans tended #14YearsForSouthIndiaIHPokiri on top of Twitter on the 14th anniversary of Pokiri, which pushed down Pawan Kalyan’s Kushi and Baahubali 2 to fourth and fifth ranks.

The last week of April is the best time for the Telugu filmmakers to release their movies. April 28 has been the most special date for them, as some movies have released on this date have turned classic. Mahesh Babu’s Pokiri and Prabhas’ Baahubali 2 has not only become the blockbusters but also trendsetters of Indian cinema. Released on April 27 Pawan Kalyan’s Kushi has also turned a classic.

Written and directed by Puri Jagannadh, Pokiri is an action thriller film, which revolves around a local goon whose killer instincts earn him not only his girlfriend’s disapproval and a corrupt cop’s enmity but also the attention of a wanted don. Released on April 28, 2006, the movie became the highest-grossing Telugu movie of the year. It also won some Nandi, Filmfare and other awards.

Today is the 14th anniversary of its release and Pokiri created ripples on social media. Hashtags like #14YearsForSouthIndiaIHPokiri and #Pokiri trended in first and second ranks, respectively with over 1 million for their credits on Twitter. It shows viewers the madness and popularity of Mahesh Babu.

Pawan Kalyan‘s Kushi was released on April 26 in 2001 and it was one of the highest-grossing Telugu films of the year. It is the 19th anniversary of its release and the movie has been trending on Twitter since yesterday. Its hashtag #19YrsOfClassicIHKushi has landed in the fourth spot in the Twitter trends today.

There is no need of an introduction to the craze and popularity of Baahubali 2, which has become the highest-grossing southern film and second-highest-grossing Indian film till date. With this movie, SS Rajamouli has taken the Indian cinema to the international level. #3YrsForMightyBaahubali2 is trending in the fifth spot on the day its team celebrates its third anniversary.