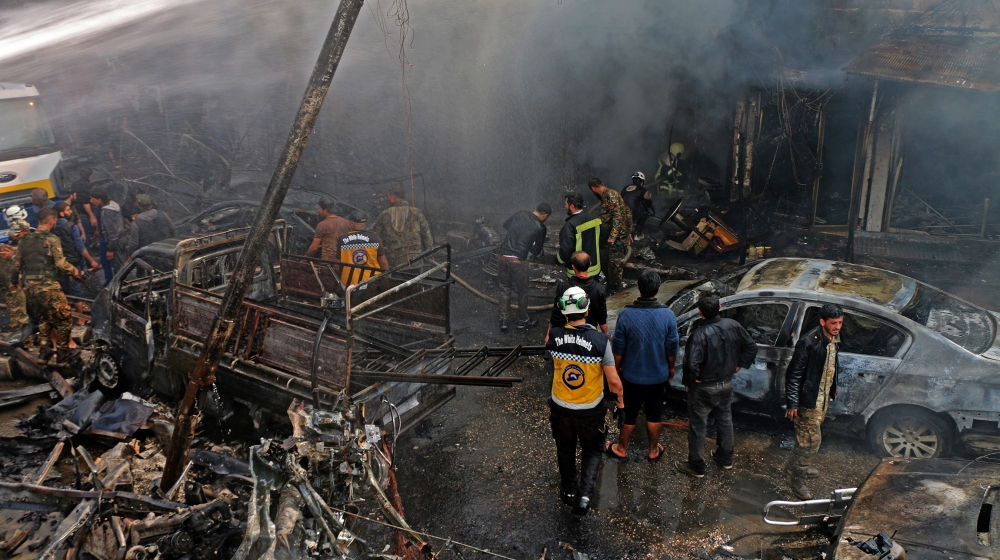 Among those who were killed were women and children - as well as six Turkish-backed opposition fighters, according to the Syrian Observatory for Human Rights [Syrian Civil Defence/AFP] At least 40 civilians have been killed in a fuel tanker bomb blast in a northern Syrian town controlled by Turkish-backed opposition fighters, according to Turkey's defence ministry.…

At least 40 civilians have been killed in a fuel tanker bomb blast in a northern Syrian town controlled by Turkish-backed opposition fighters, according to Turkey’s defence ministry.

The ministry said in a Twitter post that another 47 people were wounded in Tuesday’s explosion in a crowded street of Afrin.

There was no immediate claim of responsibility but Turkey blamed the attack on the Kurdish People’s Protection Units (YPG).

Ankara accuses the YPG of being the Syrian offshoot of the outlawed Kurdistan Workers’ Party (PKK), which has waged an armed rebellion against Turkey since 1984. The PKK is considered a “terrorist group” by Ankara and many Western capitals.

Syrian activists said the blast on Tuesday burned several people to death, including some who were stuck inside their vehicles.

The blast set several cars and shops on fire and tanker trucks were used to fight the blaze.

Amid fears the death toll could rise, activists in northern Syria urged people in the Afrin area to head to hospitals and donate blood.

Similar explosions in areas controlled by Turkey-backed opposition fighters have killed many people in recent months, attacks that Ankara blames on Kurdish fighters.

Turkey and allied Syrian opposition fighters took control of Afrin in a military operation in 2018.

Ankara supports the Syrian opposition in the war against President Bashar al-Assad, but has worked closely with his ally, Russia, to secure and monitor local ceasefires.