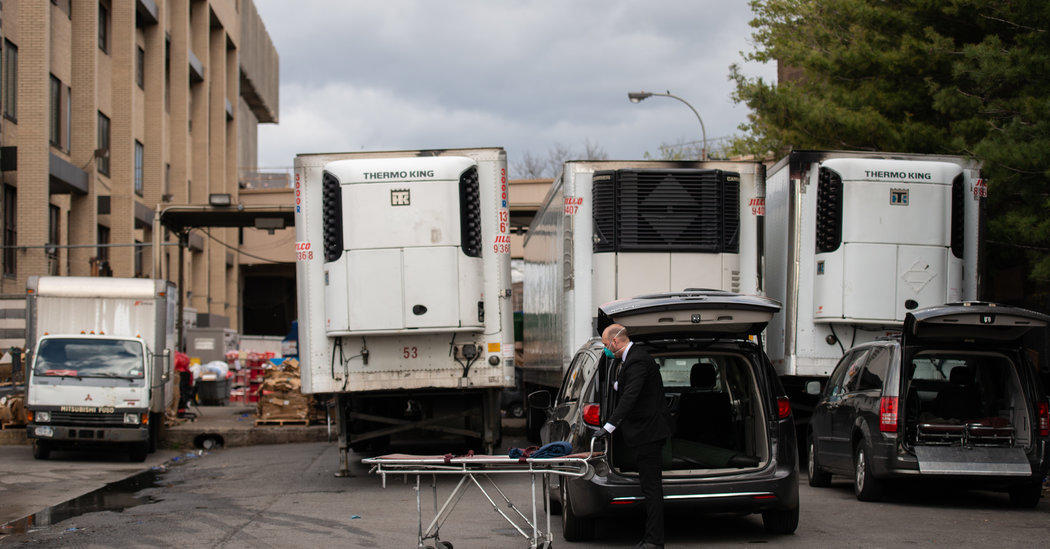 Determining what percentage of those infected by the coronavirus will die is a key question for epidemiologists, but an elusive one during the pandemic.A funeral director at a hospital in Brooklyn last week. Refrigerated trucks served as makeshift morgues to accommodate the number of people dying of the coronavirus.Credit...Andrew Seng for The New York TimesApril…

Coroners in some parts of the country are overwhelmed. Funeral homes in coronavirus hot spots can barely keep up. Newspaper obituary pages in hard-hit areas go on and on. Covid-19 is on track to kill far more people in the United States this year than the seasonal flu.

But determining just how deadly the new coronavirus will be is a key question facing epidemiologists, who expect resurgent waves of infection that could last into 2022.

As the virus spread across the world in late February and March, the projection circulated by infectious disease experts of how many infected people would die seemed plenty dire: around 1 percent, or 10 times the rate of a typical flu.

But according to various unofficial Covid-19 trackers that calculate the death rate by dividing total deaths by the number of known cases, about 6.4 percent of people infected with the virus have now died worldwide.

In Italy, the death rate stands at about 13 percent, and in the United States, around 4.3 percent, according to the latest figures on known cases and deaths. Even in South Korea, where widespread testing helped contain the outbreak, 2 percent of people who tested positive for the virus have died, recent data shows.

These supposed death rates also appear to vary widely by geography: Germany’s fatality rate appears to be roughly one-tenth of Italy’s, and Los Angeles’s about half of New York’s. Among U.S. states, Michigan, at around 7 percent, is at the high end, while Wyoming, which reported its first two deaths this week, has one of the lowest death rates, at about 0.7 percent.

Virology experts say there is no evidence that any strain of the virus, officially known as SARS-CoV-2, has mutated to become more severe in some parts of the world than others, raising the question of why there appears to be so much variance from country to country.

Determining death rates is especially challenging in the midst of a pandemic, while figures are necessarily fluid. Fatality rates based on comparing deaths, which are relatively easy to count, to infections, which are not, almost certainly overestimate the true lethality of the virus, epidemiologists say. Health officials and epidemiologists have estimated there are five to 10 people with undetected infections for every confirmed case in some communities, and at least one estimate suggests there are far more.

On top of that, deaths lag infections. The thousands of people with Covid-19 who died this week in the United States were most likely infected as far back as a month ago. So as the number of new cases reported begins to fall in hard-hit places like New York City, the death rate will almost certainly rise.

In fact, even the number of people dying is a moving target. Covid-19 deaths that happen at home appear to be widely underreported. And New York City increased its death count by more than 3,700 on Tuesday, after officials said they were now including people who had never tested positive for the virus but were presumed to have died of it.

But the missing data on deaths in the deaths-to-infections ratio is still almost certain to be dwarfed by the expected increase in the denominator when the total number of infections is better understood, epidemiologists say. The statistic typically cited by mayors and governors at Covid-19 news conferences relies on a data set that includes mostly people whose symptoms were severe enough to be tested.

Epidemiologists call it “severity bias.” It is why the fatality rate in Wuhan, China, where the outbreak began, was reported to be between 2 percent and 3.4 percent before it was revised to 1.4 percent, and it may yet be lower.

One intriguing case study for epidemiologists looking for the true fatality rate is the Diamond Princess cruise ship, which became a kind of natural experiment when nearly all of its 3,711 passengers and crew members were tested for the coronavirus after an outbreak on board.

The ship’s “case fatality rate,” which included only those who showed symptoms, was 2.6 percent, according to a study by researchers at the London School of Hygiene and Tropical Medicine, while the “infection fatality rate,” which included those who tested positive yet remained asymptomatic, was 1.3 percent. (A cruise ship, in which people are in a confined space, is not representative of the more dynamic situation in cities). The known number of coronavirus cases worldwide is about 2 million, and at least 127,000 of those patients have died. The United States has an estimated 600,000 reported cases and more than 25,000 deaths, the most in the world. But many people infected with the virus have no symptoms, or only mild ones, and appear in no official tally.

Facing a shortage of tests to confirm who has the disease and who does not, and fearing a shortage of I.C.U. beds, hospitals in some areas of the United States have declined to test or admit people whose oxygen saturation is above 90 percent.

Whether a particular locale tests people with even mild symptoms is a key factor in determining how many people were infected, but testing capacity has been limited in many places.

“People with mild symptoms, I just send them home,” said Amesh Adalja, a senior scholar at Johns Hopkins Center for Health Security, and a critical care physician in Pittsburgh. “All of this is creating disparities in case-fatality ratios that don’t reflect real differences.”

Even with testing now becoming more widely available for Americans with Covid-19 symptoms, the proportion of people infected by the virus who do not feel appreciably sick is unknown, including in places with some of the highest deaths per 100,000 people: New York (55), Spain (40), Belgium (36), Italy (35), New Jersey (32), France (23) and Louisiana (22).

A clue comes from Iceland, which has tested 6 percent of its population, perhaps the highest proportion of any country. Of those who tested positive, 43 percent had no symptoms at the time, though it is likely that many developed them later.

What scientists call the infection fatality rate is so closely watched because even a seemingly trivial decrease — from, say, 1.0 percent to 0.9 percent — could mean a few hundred thousand fewer deaths in a population the size of the United States. It is also used to calibrate interventions aimed at preventing more deaths with their grim economic consequences.

Over the coming months, tests that can identify antibodies in the blood of people who were unwittingly exposed to the virus will allow for a closer approximation of total infections in different populations.

Both the Centers for Disease Control and Prevention and the National Institutes of Health recently announced that they would begin using antibody tests to see what proportion of the U.S. population has already been infected. Covid-19 may prove to be less lethal than initial predictions, with an infection fatality rate of under 1 percent, as suggested in a March 26 editorial published in the New England Journal of Medicine by Dr. Anthony S. Fauci and Dr. H. Clifford Lane, both of the National Institute of Allergy and Infectious Diseases, and Dr. Robert R. Redfield, director of the C.D.C.

But the public should not take a false comfort in death-rate statistics that might suddenly seem lower, epidemiologists warn.

The infection fatality rate of seasonal flu strains, which kill tens of thousands of Americans each year, is about 0.1 percent. And as Dr. Fauci, the nation’s top infectious disease official, told lawmakers in March when he was urging them to take serious mitigation efforts, the coronavirus “is a really serious problem.”

The inconsistencies in the number of coronavirus cases and deaths in different parts of the United States, according to a C.D.C. report released this week, depend on numerous factors: when the first cases of the virus arrived in a region; its population density; and the age distribution and prevalence of underlying medical conditions in its population. Also important are the timing and extent of community mitigation measures introduced by a region’s public officials, its diagnostic testing capacity and its public-health reporting practices.

The same factors most likely apply to the jumble of outcomes across the globe. But which ones end up fueling or mitigating a local outbreak, infectious disease experts say, can be hard to tease out.

The disparity between New York, with 55 deaths per 100,000 people, and California, with two, for instance, has been widely attributed to the imposition of earlier stay-at-home orders in California, which already had a work-at-home culture prepared to embrace the restrictions. But what about New York’s role as the business capital of the world, where travelers returning from Europe unwittingly introduced the coronavirus by mid-February? Or its high population density, which the C.D.C. report suggests may significantly accelerate the transmission of a disease spread by droplets of mucus or saliva?

“The comparison of New York to California is a little unfair in a way,” said Dr. Mokdad of the Institute for Health Metrics and Evaluation. “Yes, in California, the governor put in the shutdown order faster, we shouldn’t take that away from them. But the deck of cards are stacked more against New York.”

Italy’s large number of cases, which overwhelmed its health care system, may be linked to its having the second-oldest population in the world after Japan; likewise The New York Times has identified more than 3,800 deaths at nursing homes and other long-term care facilities across the United States with coronavirus cases.

And the alarming number of African-Americans across many states being killed by Covid-19, health experts said, is likely to be related to higher rates of health conditions, rooted in longstanding economic and health care inequalities, that make it harder for them to survive the infection.

“The state number is an average that masks disparities by county, or even within a county,” Dr. Mokdad said. “Covid-19 is coming on top of underlying population diversity and disparities in health in the United States, and many communities will suffer from it more than other communities.”

Even as parts of the country edge toward reopening, cases are rising in Florida and other Southern states whose governors delayed closing beaches and dine-in restaurants. And it is the virus’s transmission rate, as much as its infection fatality rate, that is preoccupying public health experts trying to find a way forward.

“Everyone in the whole country is vulnerable to this,” said Andrew Noymer, an associate professor of public health at the University of California, Irvine. “Nobody has pre-immunity. That’s totally unlike flu. So New York had some early cases, it spread like crazy. But why is Des Moines not going to have a Covid epidemic? What’s so special about Springfield, Ill.? Social distancing will end. And people will start getting it again and dying.”