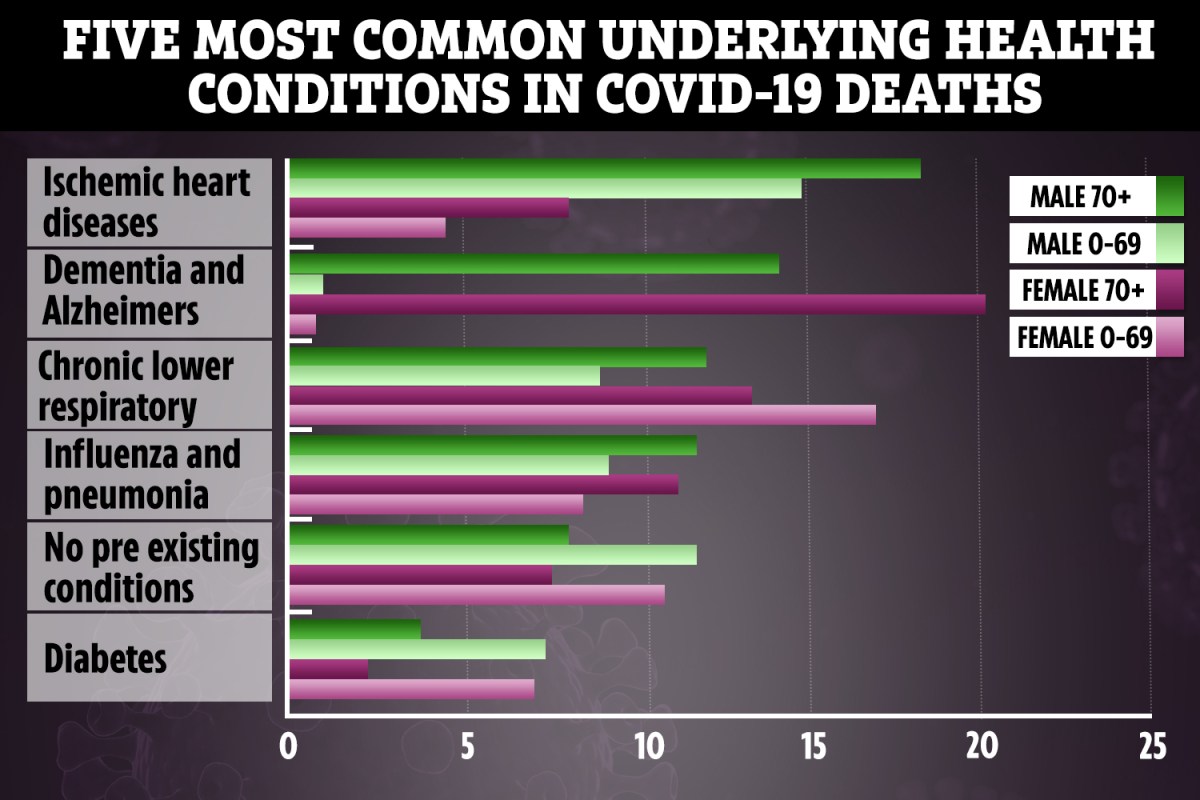 ALMOST one in every ten coronavirus deaths in England and Wales were in "healthy" people, figures released today have revealed. New statistics show that 91 per cent of people who died from Covid-19 had at least one underlying health condition. ⚠️ Read our coronavirus live blog for the latest news & updates The Office for…

ALMOST one in every ten coronavirus deaths in England and Wales were in “healthy” people, figures released today have revealed.

New statistics show that 91 per cent of people who died from Covid-19 had at least one underlying health condition.

The Office for National Statistics (ONS) found that the most common were heart disease and dementia.

Chronic lower respiratory diseases, diabetes and the flu were other pre-existing conditions that accounted for the most deaths.

The new analysis detailed all deaths that occurred in England and Wales between March 1 and 31, registered up to April 6.

In that time period, there were 3,912 deaths involving coronavirus – of which 86 per cent had Covid-19 listed as the cause of death.

In 91 per cent of cases, the patient also had at least one pre-existing condition.

Give now to The Sun’s NHS appeal

BRITAIN’s four million NHS staff are on the frontline in the battle against coronavirus.

But while they are helping save lives, who is there to help them?

The Sun has launched an appeal to raise £1MILLION for NHS workers.

The Who Cares Wins Appeal aims to get vital support to staff in their hour of need.

We have teamed up with NHS Charities Together in their urgent Covid-19 Appeal to ensure the money gets to exactly who needs it.

The Sun is donating £50,000 and we would like YOU to help us raise a million pounds, to help THEM.

No matter how little you can spare, please donate today here

The analysis of all deaths registered so far in March found that eight per cent involved coronavirus, making it the third biggest killer – after dementia and coronary heart disease.

Twice as deadly for men

Figures also revealed that the death rate for men with coronavirus was double that of women.

Death rates increased in every age group for both men and women, and the gap between men and women was significant from age 55 and up.

The ONS pointed out that, in general, men have a higher mortality rate than women.

The ONS cautioned that the total number of deaths for the month is likely to increase as more deaths are registered.

Nine in 10 of the deaths involving Covid-19 were in people with pre-existing conditions, the ONS said.

Among those who had no pre-existing conditions was 13-year-old Ismail Mohamed Abdulwahab, from Brixton, London, who died of coronavirus last month.

Luca Di Nicola, 19, originally from Italy but living in North London, was also understood to be healthy but passed away just 30 minutes after being rushed to hospital – from apparent fulminant pneumonia.

It comes as the number of people who have died in hospital after testing positive for Covid-19 has reached almost 13,000, with growing concern over increasing deaths in care homes.

Meanwhile, the Government is expected to announce that lockdown measures will be extended for another three weeks today.

Ministers will meet this morning to agree to prolong the social distancing controls announced on March 23, amid signs the epidemic in the UK is beginning to peak.

Downing Street said the three-week review of the lockdown regulations will go ahead as planned in line with the coronavirus legislation.

However, ministers and officials have repeatedly made clear there is no prospect of any imminent relaxation.

On Wednesday night, health minister Nadine Dorries took to Twitter to urge journalists to stop asking about an exit strategy.

She said: “There is only one way we can ‘exit’ full lockdown and that is when we have a vaccine.

“Until then, we need to find ways we can adapt society and strike a balance between the health of the nation and our economy.”

CORONAVIRUS CRISIS – STAY IN THE KNOW

Don’t miss the latest news and figures – and essential advice for you and your family.

To receive The Sun’s Coronavirus newsletter in your inbox every tea time, sign up here.

Get Britain’s best-selling newspaper delivered to your smartphone or tablet each day – find out more.

Speaking at the daily No 10 press conference on Wednesday, Health Secretary Matt Hancock said there could be no “let up” in the efforts to curb the spread of the virus.

“We cannot let go of the hard work that has been done so far. This shared sacrifice is starting to work but we will not lift these measures until it is safe to do so,” he said.

The human cost of the epidemic was underlined with the disclosure that the latest victims of the disease included pregnant nurse Mary Agyeiwaa Agyapong, 28, who had worked on a general ward at Luton and Dunstable University Hospital for five years.

Her baby, a girl, was delivered successfully and was doing well, according to the hospital.

According to the latest figures, 13,729 patients have died in hospital after testing positive for coronavirus in the UK as of 5pm on Tuesday, up by 861 from the previous day.

Three quarters of families forced to use savings to cover bills

Drinking alcohol may increase chance of catching coronavirus, WHO warns

However, England’s chief medical officer Professor Chris Whitty warned of a possible “bounce” in the numbers when the next set of figures are released due to delays in reporting deaths over the Easter weekend.

He said while the UK was “probably” reaching the peak of the epidemic, the high numbers of deaths were expected to continue for a “short while” to come.

Meanwhile, captain Tom Moore, 99, who is walking 100 lengths of his garden to generate cash for the NHS has been praised as “an inspiration to us all” as his fundraising campaign passed the £12 million mark.

Coronavirus Explained: why the UK COVID-19 lockdown is here to stay until at least May