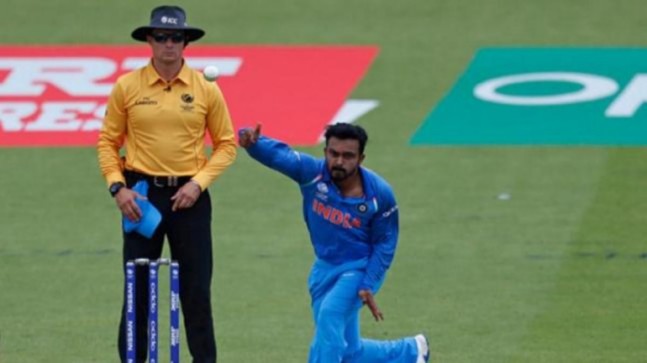 India all-rounder Kedar Jadhav made the world take notice of his bowling when he came up with a bizarre slingy action during an ODI series in 2016 against New Zealand.The pint-sized all-rounder made it difficult for opposition batsmen by delivering the ball with the wide-arm action. His deliveries kept low so much so that most…

India all-rounder Kedar Jadhav made the world take notice of his bowling when he came up with a bizarre slingy action during an ODI series in 2016 against New Zealand.

The pint-sized all-rounder made it difficult for opposition batsmen by delivering the ball with the wide-arm action. His deliveries kept low so much so that most of them didn’t even climb above the knee roll.

With his slingy action, Kedar Jadhav found a lot of success as a bowler, especially under MS Dhoni’s captaincy. The Chennai Super Kings all-roundeer was used as a partnership-breaker and he delivered, more often than not.

Despite not bowling much in domestic cricket, Kedar Jadhav has bowled in more than 40 ODIs and picked up 27 wickets.

Shedding light on how he came up with the slingy bowling action, Kedar Jadhav, in an Instagram live chat with Chennai Super Kings, said it all started when MS Dhoni came up to him and told him that he would need a few overs from him as a part-time bowler.

Kedar Jadhav recollected how Anil Kumble, the then India coach, approved his action at the nets in Dharamsala in 2016 and how MS Dhoni’s faith in him helped him explore bowling in international cricket.

Notably, Kedar Jadhav picked up 2 wickets in the 1st international match wherein he bowled — an ODI against New Zealand in Dharamsala.

“Mahi Dhoni] bhai was captain that time. He said ‘I need a few overs from you tomorrow in the game’. I started bowling off-spin. Like India and all over the world, anybody who is a part-time off-spinner, people will go after him from the 1st ball

“So then, after bowling a few overs to all the batsmen (at the nets), but everyone was hitting me wherever they wanted. I just got bored and wanted to try something new. So at that time, Anil bhai (Kumble) was the coach and I asked him,” Kedar Jadhav said.

“The first delivery I bowled, I bowled it around the wicket and I still remember, Amit Mishra was batting in the nets. My arm was very wide and I left the ball from there only. Mishy bhai thought it was going to be a wide. So he just planted his foot and left it alone. But the ball hit his pads. He was plumb in front in the nets.

“He was like ‘this is not allowed, you’re chuking’. I said, let it get cleared from the coaches. I asked Anil bhai to check my action. I told him ‘if it’s allowed, I can bowl like this in the matches’.

“Then I bowled with the side-arm. The ball was keeping low on the Dharamsala practice pitches. The angle also batsmen were finding it difficult. Then Anil bhai said ‘this is legal. As long as your arm is over the shoulder, you can bowl like this also’.

“Then I got confidence. I told myself ‘tomorrow if I bowl my first over with 2-3 runs, then I can try with this action’.”

‘Credit should go to Mahi bhai’

Kedar Jadhav also recalled his first wicket in international cricket – James Neesham and said the wicket gave him the confidence to continue with the side-arm action.

“I remember after bowling the 1st over in the match with normal action, I bowled the first ball of the 2nd over with this round-arm action. James Neesham was the batsman. I think he just checked his shot and it came back to me caught and bowled. That was my first wicket. Then I started getting confidence.

“The credit should go to Mahi bhai for the confidence he gave me that I can bowl. I had not bowled much in domestic cricket also. But that wicket and the faith that Mahi bhai had in me got me as a bowler.”