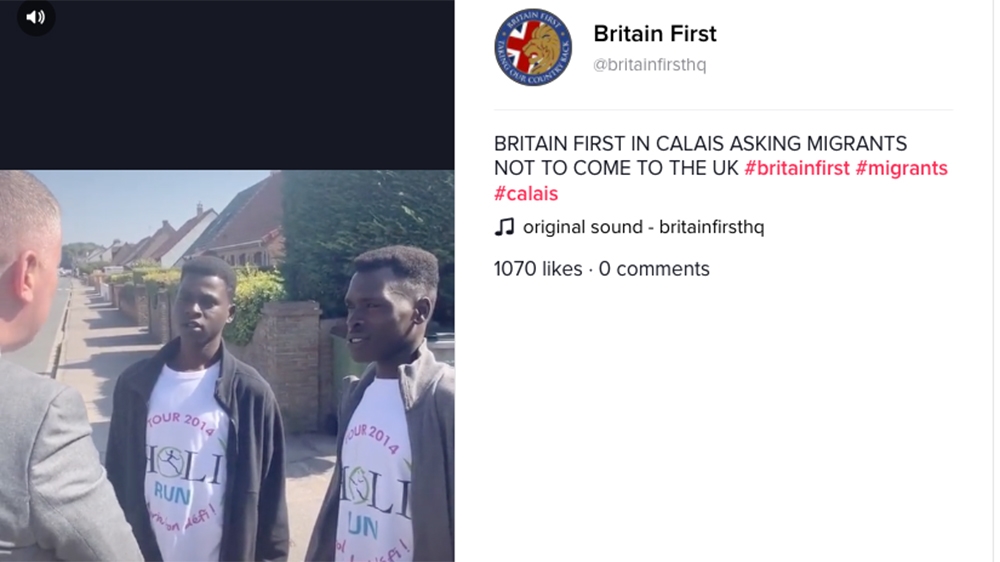 Far-right groups and figures in the UK who have been banned from sites such as Facebook and Twitter have started posting on TikTok, a Chinese social media app which is popular among young people and used to share short videos. Britain First, a fascist political organisation, began using the application at the start of April. More:  As…

Far-right groups and figures in the UK who have been banned from sites such as Facebook and Twitter have started posting on TikTok, a Chinese social media app which is popular among young people and used to share short videos.

Britain First, a fascist political organisation, began using the application at the start of April.

Many of its TikTok posts are anti-immigration, with one depicting leader of the group Paul Golding telling two Black men in Calais, France: “We don’t want any more migrants coming to our country … don’t come to England, we’re full up, we’re a small country. We want to look after our own people. With all these migrants coming to our country, you’re making it difficult.”

Prominent far-right activist Tommy Robinson, whose real name is Stephen Yaxley-Lennon, signed up to the app at the end of March.

His account has already garnered almost 22,000 followers. His TikTok bio reads: “Banned from all western social media, lets give the Chinese a go”.

In one post, Robinson shares a clip from an interview with ITV in which he holds the Quran and says: “This book is the reason we are in such a mess.”

Azfal Khan, an MP with the main opposition Labour Party and shadow deputy leader of the House of Commons, urged the government to “take steps to regulate TikTok and ensure that internet firms take responsibility for protecting their users”.

He told Al Jazeera it was worrying that far-right figures have been able to sign up to TikTok “when they have been banned on platforms such as Twitter and Facebook”.

Both Britain First and Robinson, who are banned on Facebook and Twitter, have consistently rallied against Muslims in the UK, a minority comprising 3.3 million people in the country, portraying them as a threat to society.

A spokesperson for Tell MAMA, an organisation monitoring anti-Muslim hate crimes, said it was concerned far-right figures were able to post on TikTok, given it attracts so many young users.

Harun Khan, secretary general of the Muslim Council of Britain, called on TikTok “to recognise its responsibility against hate” and “align with best practice”.

TikTok, a Chinese app, said it was investigating posts by UK far-right groups and figures, but did not confirm which posts exactly and whether either account had contravened its rules.

A spokesperson said: “Keeping people on TikTok safe is a top priority and our Community Guidelines clearly outline what is not acceptable on our platform.

“The accounts in question are subject to a live investigation due to the nature of some of the content posted, and we will take appropriate action following the completion of this investigation.”

Facebook removed Robinson’s page and profiles in 2019 for posting material that used “dehumanizing language and call[ed] for violence targeted at Muslims”.

Britain First, which has over 3,000 TikTok followers, was removed from Facebook alongside other far-right figures in 2018 after being accused of promoting hate.

At the time of publishing, neither Robinson nor Britain First had responded to Al Jazeera’s request for comment.

TikTok, owned by Beijing-based company ByteDance, has amassed more than 800 million users since it was launched in 2016.

Last year, a TikTok post highlighting the mistreatment of Muslims in the Xinjiang region of China received widespread praise and attention.

The user who posted the video claimed her account was frozen for a month, an allegation disputed by TikTok at the time.