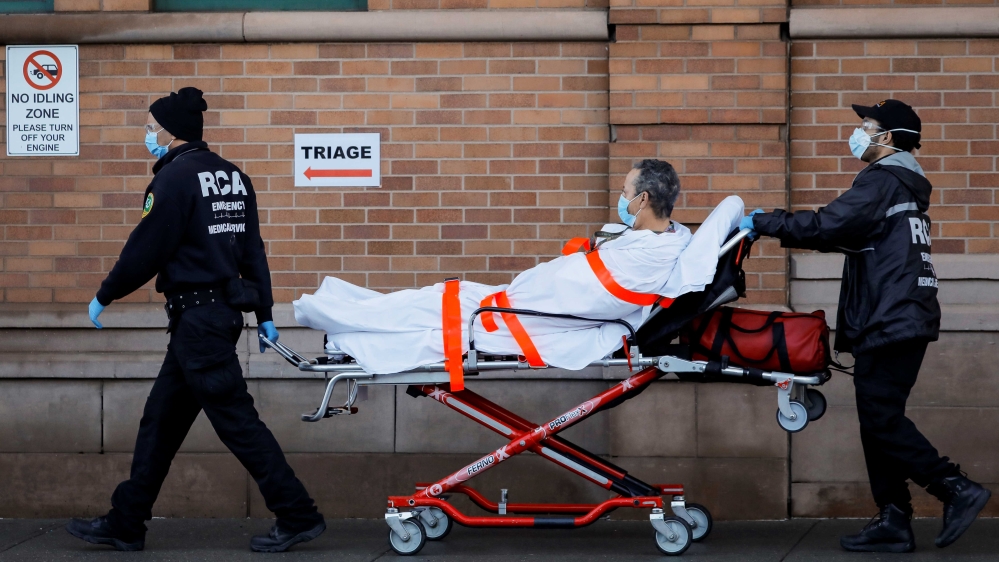 US coronavirus deaths have risen by a single-day record 2,228 to top 28,300, according to a Reuters tally, as officials debated how to reopen the economy without reigniting the outbreak. The United States, with the world's third-largest population, passed a second milestone late on Tuesday with over 600,000 reported cases, three times more than any…

US coronavirus deaths have risen by a single-day record 2,228 to top 28,300, according to a Reuters tally, as officials debated how to reopen the economy without reigniting the outbreak.

The United States, with the world’s third-largest population, passed a second milestone late on Tuesday with over 600,000 reported cases, three times more than any other country.

The increase of 2,228 deaths excludes a revision by New York City to include deaths presumed to be due to the novel coronavirus but never tested dating back to March 11.

Officials reported 3,778 “probable” deaths, where doctors were certain enough of the cause of death to list it on the death certificate, and 6,589 confirmed by a lab test. Combined, that would put the total fatalities in the city to over 10,000.

As the numbers continue to rise, officials debate over how and when to reopen the US economy and start easing restrictions.

The coronavirus restrictions put in place to contain the spread of the virus have crippled the economy, with businesses forced to close and millions of Americans losing their jobs.

President Donald Trump has floated a May 1 target for restarting the economy, which his top infectious disease adviser said on Tuesday was “overly optimistic” after a battle erupted between Trump and state governors over who had the power to lift restrictions aimed at curbing the coronavirus pandemic.

Anthony Fauci, head of the National Institute of Allergy and Infectious Diseases, said public health officials must be able to test for the virus quickly, isolate new cases and track down new infections before social-distancing restrictions can be eased.

“We have to have something in place that is efficient and that we can rely on, and we’re not there yet,” Fauci told the Associated Press news agency. Trump, a Republican running for re-election in November, lashed out at Democratic state governors, suggesting they were “mutineers” after New York’s Governor Andrew Cuomo said he would refuse any order by the president to reopen the economy too soon.

“If he ordered me to reopen in a way that would endanger the public health of the people of my state, I wouldn’t do it,” Cuomo told CNN earlier on Tuesday, referring to Trump.

‘Spoiling for a fight’

At a news conference later, Cuomo said Trump was “clearly spoiling for a fight on this issue” and that he did not want a partisan battle, but added, “We don’t have a king in this country, we have a constitution and we elect the president.”

Offering an expansive assessment of the powers of the presidency, Trump on Monday asserted he has “total” authority to decide on reopening the economy even though he earlier had deferred to the governors in putting social distancing orders in place.

Cuomo, a Democrat whose state has been the epicentre of the US outbreak, and governors of six other northeastern states have announced plans to formulate a regional plan to gradually lift restrictions. On the Pacific Coast, the governors of California, Oregon and Washington state announced a similar regional approach.

Trump, whose attacks on Democrats appeal to his conservative political base, posted tweets attacking Cuomo individually and Democratic governors in general.

Trump rejected the idea that governors should determine when and how to reopen state economies, insisting “the president of the United States calls the shots”.

“The governors know that,” Trump told a Monday briefing. But governors were moving forward with their planning. Oregon Governor Kate Brown, a Democrat, on Tuesday offered her own framework for eventually restarting public life and business in the state.

Some Republicans, including the governors of Ohio, Maryland and New Hampshire, also said states have the right to decide when and how to reopen.

The political posturing coincided with fresh signs the pandemic has been slowing in New York and other early hot spots even as the death toll mounts.

New York hospitalisations have fallen for the first time since the pandemic’s onset, Cuomo said, adding, “We think we are at the apex on the plateau.”

David Reich, president of New York’s Mount Sinai Hospital, said even if hospital admissions there had levelled off, it still remained an extraordinary time of strain for staff and resources.

“The plateau is not a very comfortable place to live,” Reich said in a telephone interview. “So I don’t think people should be celebrating prematurely.”