Skip to content
Mirror Desk 7 months ago 4 min read
Laminated black shales and cherts exposed on the Peel River, Yukon, Canada, that were deposited during the late Ordovician and earliest Silurian. These sediments show no evidence of organisms living on the seafloor due to anoxic conditions at the seabed. Researchers estimated the global extent of low-oxygen conditions during this time period using new trace… 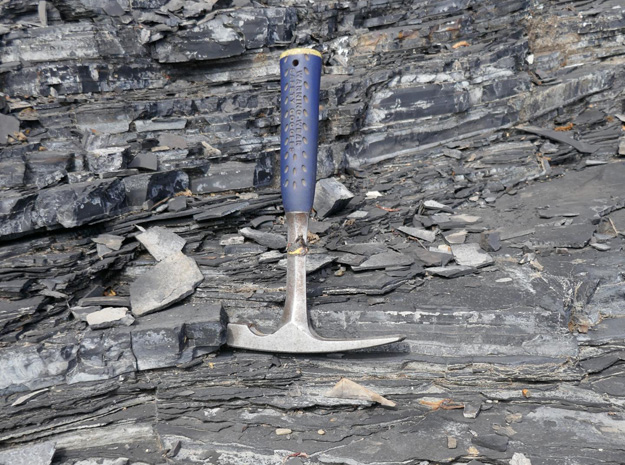 Laminated black shales and cherts exposed on the Peel River, Yukon, Canada, that were deposited during the late Ordovician and earliest Silurian. These sediments show no evidence of organisms living on the seafloor due to anoxic conditions at the seabed. Researchers estimated the global extent of low-oxygen conditions during this time period using new trace metal isotope data and uncertainty modeling. CREDIT Erik Sperling

In a new study, Stanford researchers have strongly bolstered the theory that a lack of oxygen in Earth’s oceans contributed to a devastating die-off approximately 444 million years ago.

The new results further indicate that these anoxic (little- to no-oxygen) conditions lasted over 3 million years – significantly longer than similar biodiversity-crushing spells in our planet’s history.

Beyond deepening understandings of ancient mass extinction events, the findings have relevance for today: Global climate change is contributing to declining oxygen levels in the open ocean and coastal waters, a process that likely spells doom for a variety of species.

“Our study has squeezed out a lot of the remaining uncertainty over the extent and intensity of the anoxic conditions during a mass die-off that occurred hundreds of millions of years ago,” said lead author Richard George Stockey, a graduate student in the lab of study co-author Erik Sperling, an assistant professor of geological sciences at Stanford’s School of Earth, Energy & Environmental Sciences (Stanford Earth). “But the findings are not limited to that one biological cataclysm.”

The study, published in Nature Communications April 14, centered on an event known as the Late Ordovician Mass Extinction. It is recognized as one of the “Big Five” great dyings in Earth’s history, with the most famous being the Cretaceous-Paleogene event that wiped out all non-avian dinosaurs some 65 million years ago.

At the outset of the Late Ordovician event about 450 million years ago, the world was a very different place than it is today or was even in the age of the dinosaurs. The vast majority of life occurred exclusively in the oceans, with plants having just begun to appear on land. Most of the modern-day continents were jammed together as a single super-continent, dubbed Gondwana.

An initial pulse of extinctions began due to global cooling that gripped much of Gondwana under glaciers. By approximately 444 million year ago, a second pulse of extinction then set in at the boundary between the Hirnantian and Rhuddanian geological stages largely – albeit inconclusively – attributed to ocean anoxia. Around 85 percent of marine species vanished from the fossil record by the time the Late Ordovician event ultimately passed.

The Stanford researchers and their study colleagues looked specifically at the second pulse of extinction. The team sought to constrain uncertainty regarding where in Earth’s seas a dearth of dissolved oxygen – as critical for oceanic biology then as it is now – occurred, as well as to what extent and for how long. Prior studies have inferred ocean oxygen concentrations through analyses of ancient sediments containing isotopes of metals such as uranium and molybdenum, which undergo different chemical reactions in anoxic versus well-oxygenated conditions.

Stockey led the construction of a novel model that incorporated previously published metal isotope data, as well as new data from samples of black shale hailing from the Murzuq Basin in Libya, deposited in the geological record during the mass extinction. The model cast a wide net, taking into account 31 different variables related to the metals, including the amounts of uranium and molybdenum that leach off land and reach the oceans via rivers to settle into the seafloor.

The model’s conclusion: In any reasonable scenario, severe and prolonged ocean anoxia must have occurred across large volumes of Earth’s ocean bottoms. “Thanks to this model, we can confidently say a long and profound global anoxic event is linked to the second pulse of mass extinction in the Late Ordovician,” Sperling said. “For most ocean life, the Hirnantian-Rhuddanian boundary was indeed a really bad time to be alive.”

The lessons of the past suggest that the deoxygenation increasingly documented in the modern oceans, particularly in the upper slopes of the continental shelves that bracket major landmasses, will put strain on many organism types – possibly to the brink of extinction. “There is no way that low oxygen conditions are not going to have a severe effect on diversity,” Stockey said.

In this way, in addition to shedding light on Earth of a distant yester-eon, the study’s findings could help researchers better model the planet as it is now.

“We actually have a big problem modeling oxygenation in the modern ocean,” Sperling said. “And by expanding our thinking of how oceans have behaved in the past, we could gain some insights into the oceans today.”

Co-authors on the study are with the Georgia Institute of Technology, Yale University, University of Portsmouth and Czech University of Life Sciences Prague.