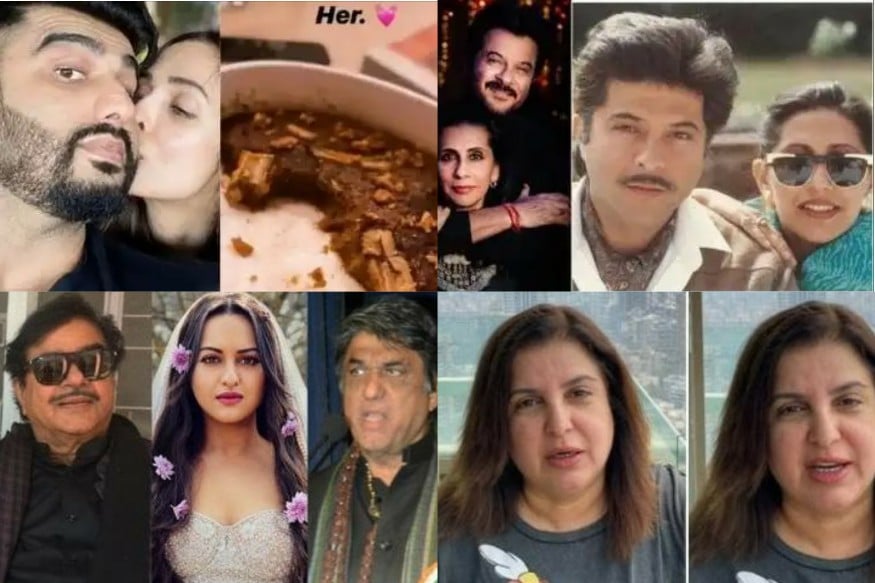 Malaika Arora made beau Arjun Kapoor a delicious dessert amid coronavirus lockdown, Mukesh Khanna said his comment about Sonakshi Sinha was misinterpreted. News18.com Last Updated: April 14, 2020, 9:15 PM IST Share this: Arjun Kapoor shared an inside glimpse into his romantic diaries with girlfriend Malaika Arora as they self-isolate at their respective houses amid…

Arjun Kapoor shared an inside glimpse into his romantic diaries with girlfriend Malaika Arora as they self-isolate at their respective houses amid the lockdown.

Malaika, who has been experimenting with desserts lately– from besan laddoos to paniyaram and banana ice cream , baked a chocolate walnut cake on Easter. Arjun shared a glimpse of the dessert on his Instagram story and simply captioned it “Her”, alongside adding a pink heart emoji to the photo.

Days after Shatrughan Sinha took an indirect jibe at Mukesh Khanna over his Ramayan remark against Sonakshi Sinha, the latter has clarified, saying that his comment was “blown out of proportion.”

Khanna, who played the role of Bhishma Pitamah in Mahabharat, had taken a dig at Sonkashi, saying that the ongoing re-runs of shows like Ramayan would be good for people like her who have “no knowledge” about Indian mythology. Sonakshi had failed to answer a question on Ramayan, on the TV show Kaun Banega Crorepati some time ago.

In a recent interview, veteran actor Anil Kapoor has revealed quite a few secrets about his wife Sunita. One of them was the fact that for their honeymoon, Sunita went all by herself as he was busy shooting. Emphasising upon the incident the Ek Ladki Ko Dekha Toh Aisa Laga actor said that he had proposed to Sunita for marriage after he got the film, Meri Jung. It was Sunita’s condition that Anil needs to have a house and a cook before they tied the knot.

“I thought, now house will come, kitchen will come, help will come…I can get married! So I called Sunita & said, ‘Let’s get married tomorrow – it’s tomorrow or never’ and the next day, we were married! I went for shoot 3 days later and madam went abroad on our honeymoon…without me!” he said.

Filmmaker-choreographer Farah Khan has yet again taken a sly dig at Bollywood celebrities for posting workout videos during the crucial times of the novel coronavirus outbreak in the world. During an interview with senior film journalist Rajeev Masand, Farah said even though she is aware that Bollywood is not known to be an industry of “deep thinking,” those videos seemed “a little shallow” to her.

A jurist, economist, politician as well as social reformer, Bhimrao Ramji Ambedkar was born on April 14, 1891. He dedicated his life towards the cause of achieving equality and respect for Dalits and untouchables. The political activist completed his studies at Columbia University and the London School of Economics.