Skip to content
Mirror Desk 6 months ago 6 min read
The image at left shows an artist's conception of the central portion of the galaxy that hosts the quasar SDSS J135246.37+423923.5 viewed at optical wavelengths. Thick winds obscure our view, and imprint signatures of the energetic outflow on the SDSS spectrum. The image at right shows the same artist's view at infrared wavelengths, as seen… 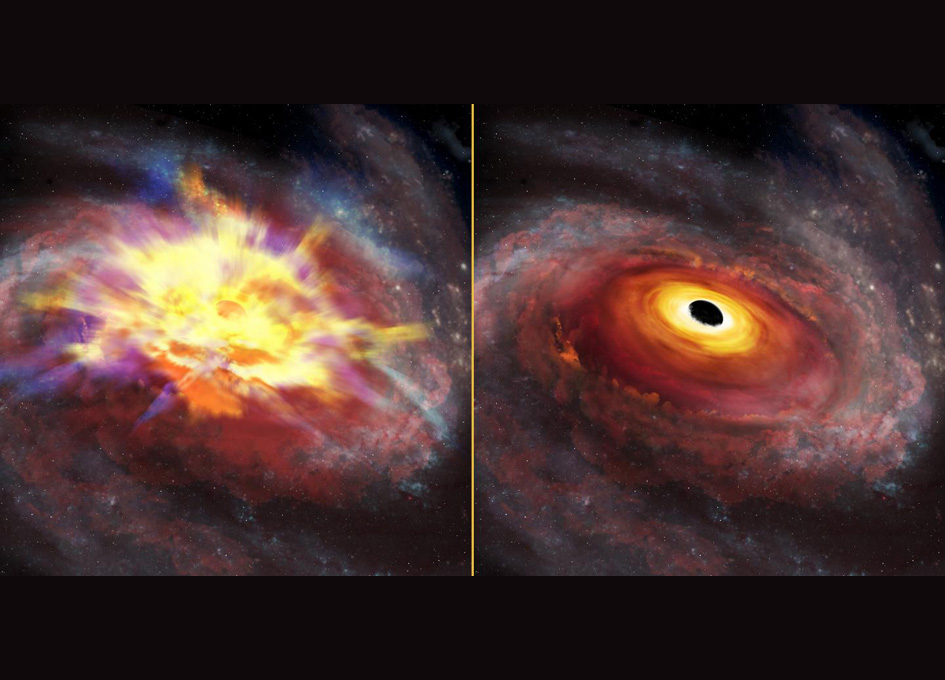 The image at left shows an artist’s conception of the central portion of the galaxy that hosts the quasar SDSS J135246.37+423923.5 viewed at optical wavelengths. Thick winds obscure our view, and imprint signatures of the energetic outflow on the SDSS spectrum. The image at right shows the same artist’s view at infrared wavelengths, as seen by the Gemini GNIRS detector. The thick outflow is transparent at infrared wavelengths, giving us a clear line of sight to the quasar. The infrared spectrum yields the quasar redshift, and from that reference frame, we measured the record-breaking outflow velocity. CREDIT International Gemini Observatory/NOIRLab/NSF/AURA/P. Marenfeld

Researchers using the Gemini North telescope on Hawai’i’s Maunakea have detected the most energetic wind from any quasar ever measured.

This outflow, which is travelling at nearly 13% of the speed of light, carries enough energy to dramatically impact star formation across an entire galaxy. The extragalactic tempest lay hidden in plain sight for 15 years before being unveiled by innovative computer modeling and new data from the international Gemini Observatory.

The most energetic wind from a quasar has been revealed by a team of astronomers using observations from the international Gemini Observatory, a program of NSF’s NOIRLab. This powerful outflow is moving into its host galaxy at almost 13% of the speed of light, and stems from a quasar known as SDSS J135246.37+423923.5 which lies roughly 60 billion light-years from Earth.

“While high-velocity winds have previously been observed in quasars, these have been thin and wispy, carrying only a relatively small amount of mass,” explains Sarah Gallagher, an astronomer at Western University (Canada) who led the Gemini observations. “The outflow from this quasar, in comparison, sweeps along a tremendous amount of mass at incredible speeds. This wind is crazy powerful, and we don’t know how the quasar can launch something so substantial”. [1]

This result is published in the Astrophysical Journal and the quasar studied here now holds the record for the most energetic quasar wind measured to date, with a wind more energetic than those recently reported in a study of 13 quasars [2].

Despite its mass and energetic outflow, the discovery of this powerhouse languished in a quasar survey for 15 years before the combination of Gemini data and the team’s innovative computer modeling method allowed it to be studied in detail.

“We were shocked – this isn’t a new quasar, but no one knew how amazing it was until the team got the Gemini spectra,” explains Karen Leighly, an astronomer at the University of Oklahoma who was one of the scientific leads for this research. “These objects were too hard to study before our team developed our methodology and had the data we needed, and now it looks like they might be the most interesting kind of windy quasars to study.”

Quasars – also known as quasi-stellar objects – are a type of extraordinarily luminous astrophysical object residing in the centres of massive galaxies [3]. Consisting of a supermassive black hole surrounded by a glowing disk of gas, quasars can outshine all the stars in their host galaxy and can drive winds powerful enough to influence entire galaxies [4].

“Some quasar-driven winds have enough energy to sweep the material from a galaxy that is needed to form stars and thus quench star formation,” explains Hyunseop (Joseph) Choi, a graduate student at the University of Oklahoma and the first author of the scientific paper on this discovery. “We studied a particularly windy quasar, SDSS J135246.37+423923.5, whose outflow is so thick that it’s difficult to detect the signature of the quasar itself at visible wavelengths.”

Despite the obstruction, the team was able to get a clear view of the quasar using the Gemini Near-Infrared Spectrograph (GNIRS) on Gemini North to observe at infrared wavelengths. Using a combination of high-quality spectra from Gemini and a pioneering computer modeling approach, the astronomers uncovered the nature of the outflow from the object — which proved, remarkably, to be more energetic than any quasar outflow previously measured.

The team’s discovery raises important questions, and also suggests there could be more of these quasars waiting to be found.

We don’t know how many more of these extraordinary objects are in our quasar catalogs that we just don’t know about yet,” concludes Choi “Since automated software generally identifies quasars by strong emission lines or blue color — two properties our object lacks — there could be more of these quasars with tremendously powerful outflows hidden away in our surveys.”

[1] The colossal energy carried by the quasar outflow is a product of both the speed of the wind and the amount of mass it carries. An intuitive way to understand this is to compare a freight train and a champion sprinter — while both travel at roughly the same speed, the more massive freight train has far more momentum and energy. [2] This result is independent of the recent NASA/STScI press release on quasar winds which focused on strong winds in 13 other quasars. [3] Quasars take their name from their first identification in the 1950’s at radio wavelengths. Quasar is a contraction of quasi-stellar radio source, a name chosen to reflect the starlike appearance of these radio sources when viewed at visible wavelengths. [4] The gas feeding a quasar surrenders energy in the form of light as it falls into the central black hole. This emitted light is both the origin of a quasar’s luminosity and the source of the energy that drives outflows.

This research was presented in the paper Discovery of a Remarkably Powerful Broad Absorption Line Quasar Outflow in SDSS J135246.37+423923.5 in the Astrophysical Journal.

NSF’s National Optical-Infrared Astronomy Research Laboratory (NOIRLab), the US center for ground-based optical-infrared astronomy, operates the international Gemini Observatory (a facility of NSF, NRC-Canada, ANID-Chile, MCTIC-Brazil, MINCyT-Argentina, and KASI-Republic of Korea), Kitt Peak National Observatory (KPNO), Cerro Tololo Inter-American Observatory (CTIO), the Community Science and Data Center (CSDC), and the Vera C. Rubin Observatory. It is managed by the Association of Universities for Research in Astronomy (AURA) under a cooperative agreement with NSF and is headquartered in Tucson, Arizona. The astronomical community is honored to have the opportunity to conduct astronomical research on Iolkam Du’ag (Kitt Peak) in Arizona, on Maunakea in Hawai?i, and on Cerro Tololo and Cerro Pachón in Chile. We recognize and acknowledge the very significant cultural role and reverence that these sites have to the Tohono O’odham Nation, to the Native Hawaiian community, and to the local communities in Chile, respectively.