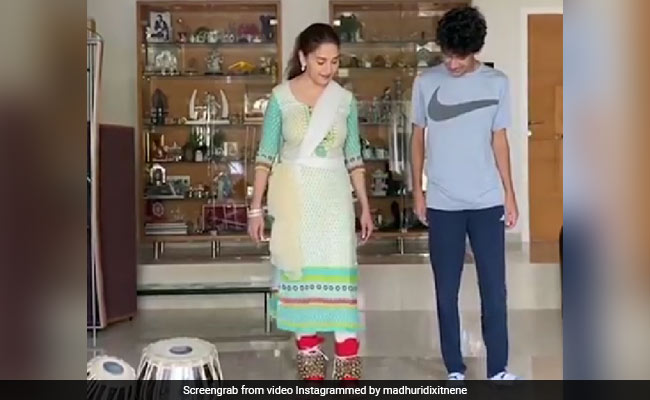 Madhuri Dixit with Arin in a still from the video. (Image courtesy: madhuridixtnene)HighlightsMadhuri posted a video on Instagram She added the hashtag #WhenArinDancedWithMadhuri Madhuri was last seen in KalankNew Delhi: Madhuri Dixit's dancing skills need no introduction. Be it Devdas'Maar Dala or the song Ghagra from Yeh Jawaani Hai Deewani. The list would be incomplete…

Madhuri Dixit with Arin in a still from the video. (Image courtesy: madhuridixtnene)

Madhuri Dixit’s dancing skills need no introduction. Be it Devdas’Maar Dala or the song Ghagra from Yeh Jawaani Hai Deewani. The list would be incomplete without Ek Do Teen and Chane Ke Khet Mein, among many other. The point is – Madhuri Dixit is a phenomenal dancer and the world knows it but have you seen her son Ari’s dance? Well, on Tuesday, Madhuri posted a video, in which she could be seen dancing while her son, while Arin could be seen playing the tabla. At the end of the video, he joined his mother and Madhuri burst out laughing. She captioned the post: “Quarantine is making all of us do things that we’ve always wanted to. Watch till the end to find out what I have always wanted to do.” She added the hashtag #WhenArinDancedWithMadhuri.

On Arin’s 17th birthday this year, Madhuri posted a super cute wish on Instagram. “Know that when I scold you, it’s only because I care, and when I hug you, it’s always cause I love you. Wherever life takes you, whatever the goals that you seek for, I will always be so proud of you! I wish for only the best in life for you, and may your birthday be filled with lots of love and laughter. Happy birthday, Arin,” wrote the actress.

On the work front, Madhuri Dixit will soon be making her debut in the digital world with Netflix’s upcoming series, which will be produced by Karan Johar. The actress has previously collaborated with Netflix for a Marathi drama titled 15th August, which was her debut project as a producer.