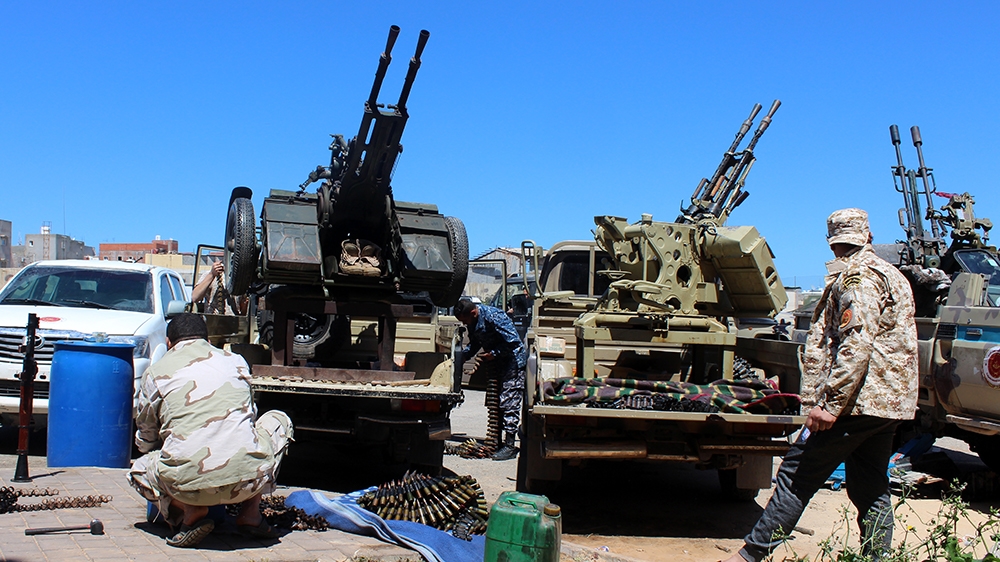 Libya's internationally recognised government said its troops have seized control of two strategic coastal cities located between the capital, Tripoli, and the Tunisian border after expelling forces loyal to eastern-based military commander Khalifa Haftar. "Our forces took control of Surman and Sabratha and are pursuing [Haftar's forces]," Mohammed Gnunu, spokesperson of the Government of National…

“Our forces took control of Surman and Sabratha and are pursuing [Haftar’s forces],” Mohammed Gnunu, spokesperson of the Government of National Accord (GNA), said in a statement on Monday.

Libya, a large oil producer, has been engulfed in chaos since 2011 when longtime leader Muammar Gaddafi was killed in an uprising.

It is now split between two rival administrations: the Tripoli-based GNA, led by Prime Minister Fayez al-Sarraj, and the House of Representatives allied to Haftar and his self-styled Libyan National Army (LNA).

In April 2019, Haftar launched a military campaign to wrest control of Tripoli but the offensive was largely stalled by forces loyal to the GNA.

On Facebook on Monday, GNA forces published images of Grad rocket launchers, 10 tanks and armoured vehicles they said they captured in the cities, which had been controlled by Salafist militias allied with Haftar.

Mohammad al-Gammoudi, a GNA commander on the ground, said Surman and Sabratha were seized after “six hours of fighting with air cover”.

While Sarraj also said his forces had taken the cities, Haftar’s forces did not immediately comment.

“Government forces say that by overtaking Sabratha and Surman, they can easily take control of all of the entire coast and the highway connecting Tripoli to the Tunisian border,” said Al Jazeera’s Mahmoud Abdelwahed, reporting from Tripoli.

“GNA forces can also join Amazigh or Berber fighters in the city of Zuwara and can move on al-Watiya airbase, a strategic airbase and stronghold of Haftar southwest of the capital.”

Sources told Al Jazeera the clashes killed nine soldiers from the GNA forces and more than 30 fighters loyal to Haftar, including a number of Sudanese and Chadian fighters.

The sources added GNA forces used drones provided by Turkey to launch raids on Haftar’s forces and the LNA.

Russia, Turkey, the United Arab Emirates and others have fuelled fighting in the oil-rich but impoverished North African country.

The UN says hundreds have been killed and more than 200,000 displaced since Haftar launched his battle for Tripoli.

Several UN-backed attempts to reach a ceasefire have failed and the UN has slammed repeated violations of a 2011 weapons embargo.

On March 17, the world body and nine countries called on Libya’s warring parties to cease hostilities to allow health authorities to fight against the new coronavirus.

Repeated UN efforts to mediate a ceasefire have not yielded a permanent result and have been on hold since envoy Ghassan Salame quit in early March, citing health reasons.