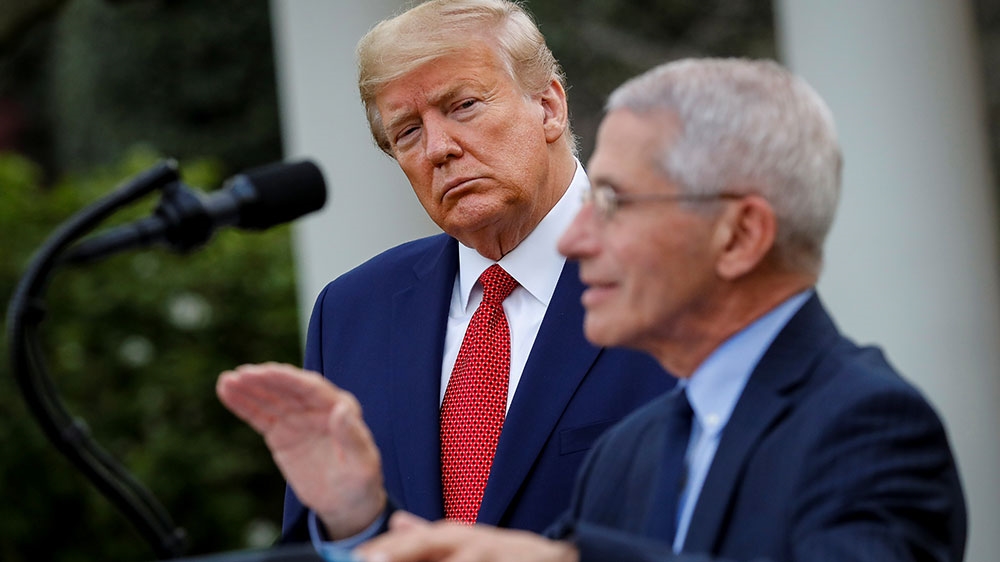 US President Donald Trump retweeted a call for the firing of the administration's top infectious disease specialist, Dr Anthony Fauci, who is leading the government's coronavirus response. The apparent condemnation came after Fauci, head of the National Institutes of Allergy and Infectious Diseases, said in a CNN interview that earlier social distancing and stay-at-home orders…

US President Donald Trump retweeted a call for the firing of the administration’s top infectious disease specialist, Dr Anthony Fauci, who is leading the government’s coronavirus response.

The apparent condemnation came after Fauci, head of the National Institutes of Allergy and Infectious Diseases, said in a CNN interview that earlier social distancing and stay-at-home orders from the administration “could have saved more lives”.

But he added it was “very difficult to go back and say that” and the process of deciding whether to impose early restrictions was “complicated”.

To date, the US has recorded more infections and deaths than any other country, with more than 557,500 cases and over 22,000 deaths.

In a tweet retweeted by Trump, former Republican congressional candidate DeAnne Lorraine wrote that “Fauci is now saying that had Trump listened to the medical experts earlier he could’ve saved more lives” adding “time to #fireFauci”.

Trump retweeted the missive shortly after it was posted early on Monday, adding “Sorry Fake News, it’s all on tape. I banned China long before people spoke up. Thank you.”

Sorry Fake News, it’s all on tape. I banned China long before people spoke up. Thank you @OANN https://t.co/d40JQkUZg5

Trump has been criticised for apparently downplaying the threat of the coronavirus in the early days of the outbreak, comparing it to the seasonal flu and suggesting it was being used as a political tool by the opposition Democratic party.

The administration has also been blamed for the lack of widespread testing, which continues to dog jurisdictions across the country and keep the actual scope of infections largely unknown.

The president has repeatedly pointed to his policy in early February of blocking foreigners who had been in China in the past 14 days from entering the US as proof of early action in battling the pandemic.

Infections to rise as restrictions lifted

Trump’s latest attack came after Fauci on Sunday said new cases of the coronavirus are certain to arise when restrictions imposed to limit the spread of the virus are eased, but that the economy in parts of the country could have a “rolling reentry” as early as May.

Rather than flipping a switch to reopen the entire country, Fauci said, a gradual process will be required, based on the status of the pandemic in various regions as well as the availability of rapid, widespread testing.

Once the number of people who are seriously ill sharply declines, officials can begin to “think about a gradual reentry of some sort of normality, some rolling reentry,” Fauci said.

“We are hoping that, at the end of the month, we could look around and say, OK, is there any element here that we can safely and cautiously start pulling back on? If so, do it. If not, then just continue to hunker down,” Fauci said.

Fauci added he “can’t guarantee” that it will be safe for Americans to vote in person in the general election on November 3.