As the world grapples with COVID-19, the Democratic Republic of the Congo (DRC), was hoping to announce itself clear of an Ebola epidemic that has ravaged the country since August 2018. Over 3,456 cases erupted across the nation, leaving 2,200 dead; it is the second most deadly outbreak in the history of the virus.  Had…

As the world grapples with COVID-19, the Democratic Republic of the Congo (DRC), was hoping to announce itself clear of an Ebola epidemic that has ravaged the country since August 2018. Over 3,456 cases erupted across the nation, leaving 2,200 dead; it is the second most deadly outbreak in the history of the virus.

Had there been no new cases until the 12th of April, the outbreak would have been declared over. For 40 days there were no news cases, and then suddenly on Friday, a new death had been reported. It was followed by another death on Sunday, that of an 11-months-old girl from the city of Beni, a city of 600,000 people in Eastern Congo. 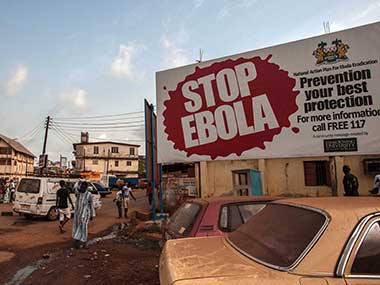 While the World Health Organization (WHO) acknowledged that this was an unwelcome development, it said there is a robust network of health workers on the ground working to eradicate the disease, and they will persevere. About 215 contacts have been traced of the first of the two recent deaths – a 26-year-old electrician.

The country will now have to wait two incubation cycles, or 42 days, with no more cases to declare the outbreak over.

The country is also bracing for a COVID-19 outbreak; so far 60 people have been infected and 5 have died.

Ebola virus disease (EVD) is caused by several viruses under the genus Ebolavirus; the latest outbreak was caused by a species called Zaire Ebolavirus.

It is not clear where the virus comes from, but thanks to genetic analysis, it appears to have initially transmitted from animals to humans but after that, it transmits from human-to-human as well. Unlike COVID-19, only those who have started showing symptoms can transmit the disease.

Ebola is spread by contact with body fluids or objects contaminated with body fluids of an infected person. Infected people can transmit the disease through bodily secretions; the virus can enter the body through breaks in the skin or via mucous membranes. Studies have shown that people can be infectious as long as the virus is in their body; it is believed to survive in semen for up to two years.

According to WHO, the case fatality rate is a staggering 50%.

The incubation period is 2-21 days, and symptoms include:

Similar to COVID-19, it is diagnosed using PCR testing. Antibody and ELISA testing can also be conducted. Treatment involves symptom alleviation; IV fluids and oxygen support can be lifesaving. Antibiotics may be used for opportunistic infections. While no known antivirals have been officially endorsed, the drugs Regeneron and mAb114 have shown encouraging results.

According to WHO, the vaccine Ervebo is highly effective for the disease caused by the Zaire strain.

Even though vaccines are available, it has been a challenge to get them to remote settings; the DRC has been in unrest for a long time, and militias and mistrust have hobbled prevention efforts.

For more information, read our article on How to avoid getting COVID-19 infection if you are a healthcare worker.

Health articles in Firstpost are written by myUpchar.com, India’s first and biggest resource for verified medical information. At myUpchar, researchers and journalists work with doctors to bring you information on all things health.