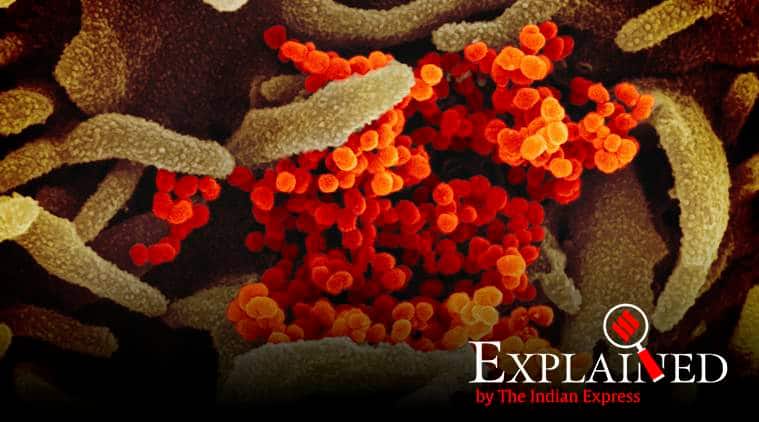 By: Explained Desk | New Delhi | Updated: April 12, 2020 7:15:25 pm The SARS-CoV-2 virus binds itself to a receptor in the human cells called ACE2. (Photo: AP)The full spectrum of the symptoms experienced by those infected with the SARS-CoV-2 is not fully known yet. Recently, research has pointed towards the neurological symptoms witnessed…

The SARS-CoV-2 virus binds itself to a receptor in the human cells called ACE2. (Photo: AP)

The full spectrum of the symptoms experienced by those infected with the SARS-CoV-2 is not fully known yet. Recently, research has pointed towards the neurological symptoms witnessed in COVID-19 patients.

Now, in an investigation of hospitalised COVID-19 patients in Wuhan, researchers have recorded the neurological manifestations of the disease. Their findings were published in the journal JAMA Neurology on April 10. They conclude that neurological symptoms can be noticed in a “notable proportion” of the patients and are not uncommon.

In their investigation, researchers studied 214 COVID-19 patients between January 16 and February 19 and noted that over 36.4 per cent of them showed neurologic symptoms, more commonly in patients with severe infection.

How can the virus affect the brain?

The SARS-CoV-2 virus binds itself to a receptor in the human cells called ACE2. This is also the receptor for SARS-CoV. ACE2 is present in other human organs as well, including the nervous system and skeletal muscles. Therefore, it is possible that the virus can lead to the person showing neurological symptoms through direct or indirect mechanisms using the ACE2 receptor.

Even so, it is not yet clear if the virus affects the skeletal muscles by binding with the ACE2 receptors or through some other route.

Further, the autopsy report of some COVID-19 patients showed that the brain tissue was hyperemic (congestion of blood in an organ), edematous (accumulation of watery fluids in cells or tissues) and some neurons showed degeneration.

Even so, such symptoms are not exclusive to the SARS-CoV-2 virus, neurological injury has also been reported in patients of SARS and MERS. An editorial in JAMA Neurology notes that in the case of SARS, the reports of neurological complications were limited and they appeared in patients two to three weeks into the course of illness.

So does COVID-19 affect the brain?

The researchers note that out of the 214 patients they studied, 126 had a nonsevere infection and 88 patients had severe infection. Overall, 78 patients showed neurological manifestations of the disease.

Compared to the nonsevere cases, the severe cases were older and had more comorbidities such as hypertension. Such patients also showed fewer “typical symptoms” of the disease such as fever and cough, while they were more likely to have neurological symptoms such as acute cerebrovascular disease, impaired consciousness and skeletal muscle injury.

Further, these neurological symptoms were seen early in the illness in COVID-19 patients, as opposed to similar manifestations seen in the case of some SARS patients.

Significantly, some of these patients reported themselves to the hospitals without any typical symptoms of the disease such as fever and cough, and presented themselves only with neurological symptoms. “Therefore, for patients with COVID-19, we need to pay close attention to their neurologic manifestations, especially for those with severe infections, which may have contributed to their death,” the researchers note.

An article in The New York Times said that specialists have observed neurological symptoms in COVID-19 patients in Germany, France, Austria, Italy and Holland. The report says, “Some doctors have reported cases of patients who were brought in for treatment because of their altered mental state, and who ultimately tested positive for Covid-19, although they had none of the classic symptoms like fever or cough,”, which is in line with what the researchers have observed in some patients in Wuhan as well.

Even so, further research needs to be done to understand why certain symptoms such as loss of smell or taste occur, to see if they are clinical manifestations of the disease itself or occur due to an inflammatory response in some patients.