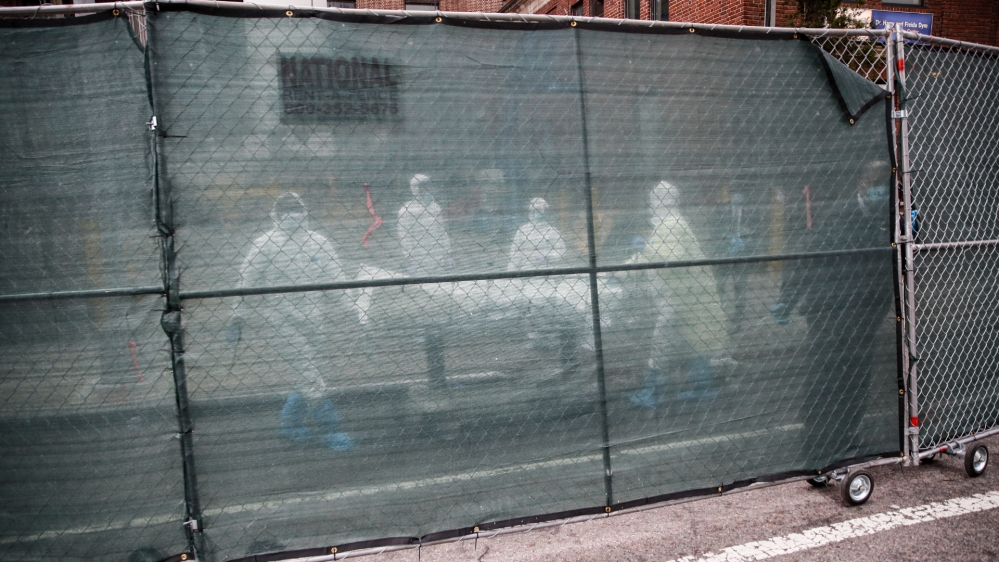 The worldwide death toll from the new coronavirus surpassed 102,000 early on Saturday (00:01 GMT), with the United States expected to overtake Italy in the grim position as the country with the highest number of fatalities. According to the latest Johns Hopkins University tally, Italy has registered at least 18,800 deaths, but the number of…

The worldwide death toll from the new coronavirus surpassed 102,000 early on Saturday (00:01 GMT), with the United States expected to overtake Italy in the grim position as the country with the highest number of fatalities.

According to the latest Johns Hopkins University tally, Italy has registered at least 18,800 deaths, but the number of new patients who have died has decreased, while the US has recorded about 18,700 fatalities, about 2,000 more than the previous day.

The number of cases worldwide is now close to 1.7 million, including more than 500,000 in the US. Patients who have recovered also increased to more than 376,000.As this developed, the World Health Organization urged caution to countries that are considering the easing of restrictions on the coronavirus lockdown in the coming days and weeks.

“The way down could be as dangerous as the way up if not managed properly,” WHO Director-General Tedros Adhanom Ghebreyesus said.

Meanwhile, in Turkey, a commotion among residents erupted in one district of Istanbul, the commercial capital, after the country announced a two-day curfew in at least 31 cities to help curb the spread of the virus, the Halk TV television station reported.

Here are the latest updates.

Uruguay has started to repatriate 112 Australians and New Zealanders from a cruise ship hit by coronavirus and stranded in the La Plata River near the capital of Montevideo since March 27, the government said.

The operation began in the evening when the Greg Mortimer, an Antarctic cruise ship operated by Aurora Expeditions, docked in the port of Montevideo.

The passengers are scheduled to board a Melbourne-bound charter flight in the early hours of Saturday. Two Australian passengers could not be transported because of their poor condition, Uruguay’s Foreign Minister Ernesto Talvi said. Coronavirus deaths in the US state of New York jumped by 777 in one day, as the number of people hospitalised stayed relatively flat, according to AP news agency.

More than 3,000 deaths have been recorded since Monday to bring the statewide count to 7,844.

The number of hospitalisations increased by 290, compared to daily increases of more than 1,000 last week. The number of intensive care patients also decreased slightly for the first time since mid-March.

Ecuadorean President Lenin Moreno has announced the creation of a humanitarian assistance account that will be funded with contributions from companies and citizens to address the economic effects of the coronavirus pandemic.

“The pandemic hit us at a critical moment, when we were trying to get ahead after a very tough economic crisis,” Moreno added in a televised speech. “It hit us without a cent in the state’s accounts.”

Ecuador reported more than 2,196 new infections in one day on Friday, raising the total number to 7,161. Some 297 have died and another 311 were likely killed by the virus, according to official data.

02:10 GMT – Trump orders US military to help Italy in fight against coronavirus

US President Donald Trump has ordered top US administration officials to help Italy in fighting the novel coronavirus by providing medical supplies, humanitarian relief and other assistance.

In a memo to several Cabinet ministers, Trump ordered a variety of measures to help Italy, including making US military personnel in the country available for telemedicine services, helping set up field hospitals, and transporting supplies, according to Reuters news agency.

Mainland China reported on Saturday 46 new coronavirus cases, including 42 involving travellers from overseas, up from 42 cases a day earlier.

China’s National Health Commission said in a statement that 34 new asymptomatic coronavirus cases were also reported, down from 47 the previous day.

Mainland China’s tally of infections now stands at 81,953, while the death toll rose by three, to 3,339, according to the Reuters news agency report. Mainland China’s tally of infections now stands at 81,953, while the death toll rose by three, to 3,339, according to the National Health Commission on Saturday [Ng Han Guan/AP]

Turkey’s president has sent a letter to Boris Johnson, wishing the British prime minister a speedy recovery from the coronavirus, the Associated Press news agency reported.

In his letter, Recep Tayyip Erdogan also conveyed his condolences to the families of British victims of the virus, expressed hope that Britain overcomes the “tragedy with the minimal losses” and relayed his good wishes to British health service employees treating COVID-19 patients.

Erdogan also invited Johnson, whose great-grandfather was Turkish, to visit “the land of your ancestors” to discuss “”steps that will further our bilateral cooperation in the post-Brexit period.”

Argentina will extend the lockdown it has imposed as a measure to control the spread of the coronavirus for the country’s major cities, President Alberto Fernandez has announced.

He did not specify when the lockdown, which was first mandated on March 20, would be lifted. He said the requirement that Argentines stay at home has helped control the rate of new infections, Reuters news agency reported.

00:12 GMT – WHO looking into neurological effects of coronavirus

The World Health Organization’s emergencies chief says the agency is aware of some anecdotal reports of neurological effects in some coronavirus patients from China.

But Dr Mike Ryan said it is unclear whether the virus, also known as COVID-19, is directly affecting the brain or whether those neurological effects may simply be due to oxygen deprivation.

Ryan said while some viruses cause complications like encephalitis and meningitis when they infect the brain, there is no indication yet that this is the case with COVID-19 patients, adding that many infectious diseases can prompt deliriousness or a change in consciousness when their oxygen levels drop dramatically, but giving patients more oxygen often resolves the issue.

Hundreds of staff at a hospital near the Spanish capital have gathered to pay homage to a 57-year-old nurse, who died Friday after contracting the COVID-19 disease, the Associated Press news agency reported.

In a post on social media, the Severo Ochoa Hospital in Leganes said the nurse died “after days of fighting relentlessly against the illness”.

The post identified the victim by his first name, Esteban, and said that his widow also worked at the hospital, one of the main battlegrounds against the spread of the coronavirus.

Read all the updates from yesterday (April 10) here.