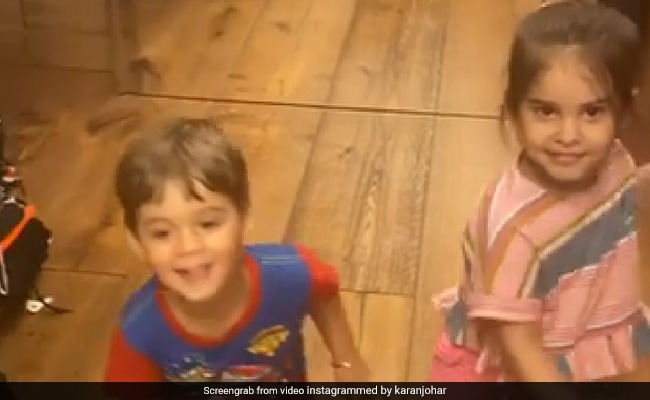 Yash and Roohi in a still from the video. (courtesy karanjohar)Highlights"Ok, I have had enough," wrote KJo "I want to weep into my blanket," he added Roohi referred to KJo as a "kharaab" dancerNew Delhi: Karan Johar's Instagram videos are getting cuter by the day. Every day, the filmmaker shares a series of videos, featuring…

Yash and Roohi in a still from the video. (courtesy karanjohar)

Karan Johar’s Instagram videos are getting cuter by the day. Every day, the filmmaker shares a series of videos, featuring his son Yash and daughter Roohi. KJo, who signs off his video with his signature “toodles,” posted a brand new video, in which Yash and Roohi reviewed their father’s dancing skills. The brother-sister-duo could be seen dancing in the video. Karan Johar’s daughter Roohi referred to her father as a “kharaab” dancer and Yash had a similar school of thought and said, “Yes.” Sharing the video on his Instagram profile, KJo wrote: “Ok, I have had enough! I want to weep into my blanket! I am the talentless Mr Johar according to my children #lockdownwiththejohars.”

A few days ago, Yash and Roohi shared their thoughts on Karan Johar’s singing and the director was not very happy about it. Here’s the super cute video:

Earlier, Karan complained in an Instagram post that “I have been body shamed!” All Roohi and Yash did were have a good laugh at Karan Johar’s “tummy.”

How can we forget the one in which Yash and Roohi reviewed KJo’s closet?

Karan Johar welcomed Yash and Roohi via surrogacy in the year 2017. On the work front, Karan Johar recently directed a segment of Netflix’s Ghost Stories and produced Good Newwz, starring Akshay Kumar, Kareena Kapoor, Kiara Advani and Diljit Dosanjh. He will also be directing the period drama Takht, which stars Kareena Kapoor, Ranveer Singh and Janhvi Kapoor among others. His upcoming ventures as a producer include Sooryavanshi, Dostana 2, Brahmastra, and Netflix’s Guilty, starring Kiara Advani.