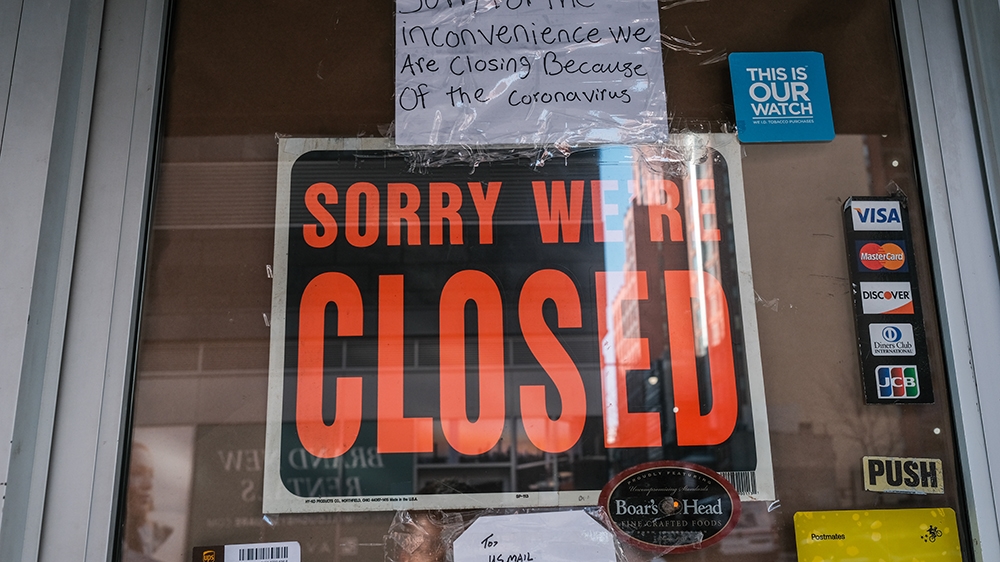 Another week, another economic record shattered as the coronavirus pandemic unleashes unprecedented carnage on the United States economy.  The number of Americans filing for initial unemployment benefits surged to 6.65 million in the week ending March 28, the US Bureau of Labor Statistics said on Thursday, obliterating the record 3.3 million set the previous week. …

Another week, another economic record shattered as the coronavirus pandemic unleashes unprecedented carnage on the United States economy.

The number of Americans filing for initial unemployment benefits surged to 6.65 million in the week ending March 28, the US Bureau of Labor Statistics said on Thursday, obliterating the record 3.3 million set the previous week.

Thursday’s numbers likely understate the true scale of people thrown out of work, given the self-employed and gig workers only gained eligibility to state and federal unemployment benefits on Friday after President Donald Trump signed an historic $2.2 trillion virus relief package into law. Many state unemployment offices have also been overwhelmed by a tsunami of applications.

Initial jobless claims is the most timely data point for assessing the damage wrought by COVID-19 on the US economy as virus containment measures force businesses to close all over the country, throwing millions out of work.

Thursday’s numbers validate the view of most economists that the US is already in recession and the country’s record job-creation boom has come to a definitive, screeching halt.

Economists expect the number of people filing for initial unemployment benefits to continue to climb as more struggling workers and businesses access benefits, thanks to the federal government casting a much wider social safety net to try and blunt the economic fallout of the virus crisis.

“Claims are likely to remain elevated throughout April, especially as more business owners and workers learn about the more generous unemployment insurance benefits,” Goldman Sachs analysts wrote in a note to clients on Wednesday.

In addition to extending the nation’s jobless safety net to more workers, the $2.2 trillion virus relief package gives the unemployed a $600 per week federal top-up to their state benefits for up to four months. The previous average jobless benefits payment was roughly $385 per person per month.

On Friday, the US Department of Labour will release the jobs report for March. But the monthly jobs numbers will not capture the full extent of the damage to the US labour market because the businesses and households that inform the data were surveyed in the middle of the month, when only a handful of states were enforcing lockdown containment measures.

It will, however, offer a glimpse of the devastation that awaits.

“A rough look at the most affected industries suggests a potential payroll job loss of over 16 million jobs,” said David Kelly, chief global strategist at JPMorgan Funds in New York. “The loss would be enough to boost the unemployment rate from roughly 3.5 percent to 12.5 percent, which would be its highest rate since the Great Depression.”