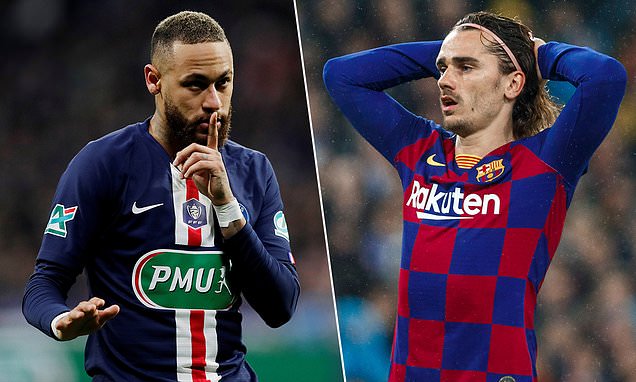 By Jordan Seward For Mailonline

Barcelona are reportedly hoping to strike a sensational deal to re-sign Neymar in the summer which would entail Antoine Griezmann going in the other direction.

The Frenchman only joined last summer from Atletico Madrid for £108million but the Catalan club are ready to let him go to help fund their move for Neymar.

Reports in Spain have claimed that Barcelona have made Neymar and Inter Milan striker Lautaro Martinez their priority signings and will explore the possibility of sealing swap deals for the players.

Ousmane Dembele and Philippe Coutinho have been mentioned as potential makeweights but according to Sky Sports Griezmann will be offered to PSG in a bid to finally seal Neymar’s long-anticipated return.

Sky Sports claim that Barcelona value Griezmann in the region of £90m and will look to sell him regardless if neither the player nor PSG are keen on their swap deal proposal.

Griezmann has not lived up to the expectations since signing from Atletico and has scored just 14 times in 37 games across all competitions.

Neymar, however, is believed to worth significantly more at £135m meaning Barcelona would most likely have to put some cash up front if PSG were to consider their offer.

The Brazilian attempted to force a move back to Barcelona last summer but was told by PSG chiefs that he would not be sold.

It has been heavily reported that Barcelona will reignite their interest in him again in the summer and boss Quique Setien has been encouraged to make the deal happen by his own son.

Laro Setien, 24, plays in the fourth tier of Spanish football for UE Sant Andreu and took part in a Q&A on his Instagram account.

‘I think Neymar is the best, so yes, Neymar to Barcelona please,’ he wrote on his Instagram story.

Neymar, who left left Barca for Paris Saint-Germain in 2017 for a world record fee of £200m, has a contract with the French champions until 2022.

Barcelona are also desperate to tie Lionel Messi to a new contract, though the Argentina star is in no rush to extend his current deal, which has more than a year left.