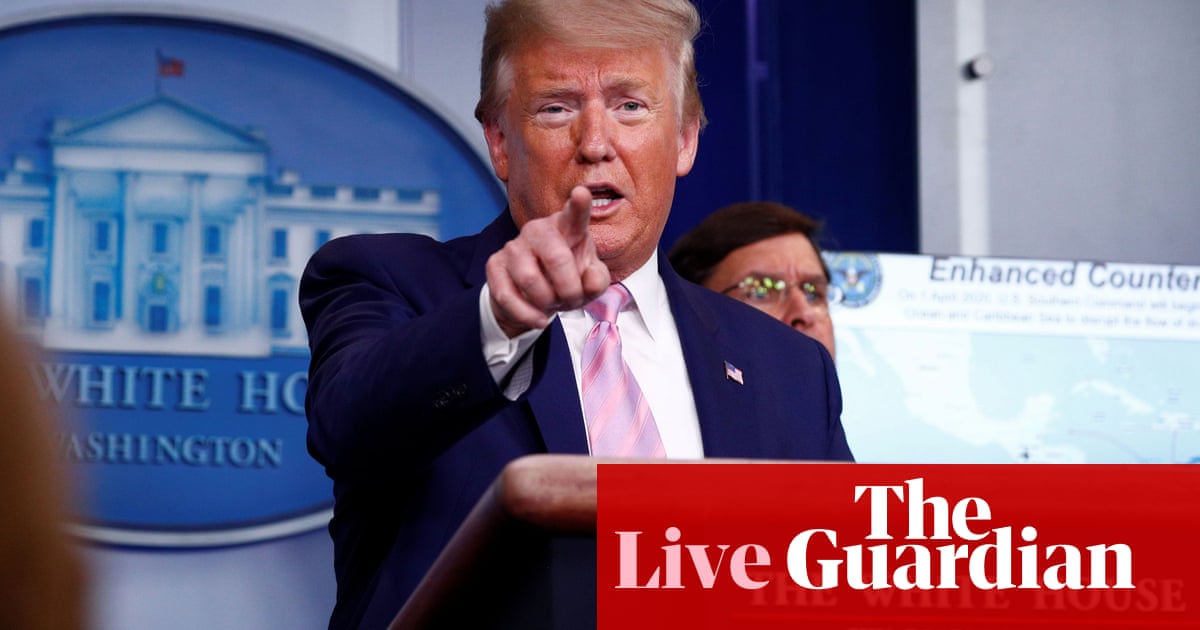 12.35am BST00:35 The briefing has ended. I’ve got one for fact check for you: Fact check: timeline “After a month or so, I think once this passes, we’re not going to have to be hopefully worried too much about the virus,” Trump said, before wrapping up. That is a very optimistic timeline. Projections, including ones…

The briefing has ended. I’ve got one for fact check for you:

“After a month or so, I think once this passes, we’re not going to have to be hopefully worried too much about the virus,” Trump said, before wrapping up. That is a very optimistic timeline.

Projections, including ones presented by White House health officials, indicate that the disease will peak in many of the countries in May, and the pandemic will continue to affect people for long after. Federal health officials have said that the outbreak could last through next year, though distancing measures and other interventions may blunt the disease’s impact.

“As the trajectory of the outbreak continues, many people in the U.S. will at some point, either this year or next, get exposed to this virus,” Nancy Messonnier of the Centers for Disease Control and Prevention told reporters last month. “And there’s a good chance many will become sick.”

A reporter from OANN has been removed from the briefing room for violating distancing rules.

OANN, a far-right news network, is a favorite of the president.

Within 10 days of Chinese officials announcing the emergence of the new coronavirus, a German lab published a recipe for a diagnostic test. As the disease spread to the US, the CDC developed a more complicated test and produced errors and false positives.

Trump touted the quality of US testing, destribing them as “strong” tests.

In fact, some of the initial coronavirus tests sent out to states were seriously flawed – some did not even work. Part of the problem came from the CDC insisting it would manufacture the tests itself.

Other countries – after their first coronavirus case – swiftly asked private companies to develop their own tests. South Korea, which recorded its first case on the same day as the US, did so within a week

The US only allowed laboratories and hospitals to conduct their own tests on February 29, almost six weeks after the first case was confirmed.

“The federal agency shunned the World Health Organization test guidelines used by other countries and set out to create a more complicated test of its own that could identify a range of similar viruses,” ProPublica reported.

Mike Pence, defending the decision not to open up Obamacare exchanges during the crisis, said that “we have Medicaid for underprivileged Americans.”

Trump approved. “That was one of the greatest answers I’ve ever heard,” he said. “Because Mike was able to talk for 5 minutes and not answer your question.”

Trump said the healthcare workers walking into hospitals are “like warriors… People are screaming, they’re clapping, they’re like heroes.”

“We’re going to be doing something for them,” he said, alluding to maybe bonuses or “something”.

Trump said he’s considering ending domestic flights between hotspots. “That is a calculation that we’re looking at right now,” he said.

Asked why the federal government hasn’t declared a national shelter-in-place order, leaving it instead to governors, Trump emphasized that flexibility.

Florida doesn’t “have thousands of people who are positive,” he said, as an example. Florida, in fact has nearly 7,000 confirmed cases.

“We had the greatest economy that we’ve ever had,” Trump said.

They – unlike the military officials who attended the earlier portion of the briefing – have fanned out a bit to distance themselves.

Trump said that the federal stockpile of personal protective equipment is nearly empty. “It is,” he said. “Because we’re sending it directly to hospitals.”

Earlier, CNN reported that the “Strategic National Stockpile is deploying the last round of shipments in its inventory, depleting the bulk of its protective gear.”

Wisconsin election officials are scrambling to prepare for the election amid severe poll worker shortages and an unprecedented request for absentee ballots. During a lengthy hearing in federal court in Madison on Wednesday afternoon, U.S. District Judge William Conley expressed skepticism that a federal judge could step in and delay the election. The governor and legislature, he said, have that power and should use it.

During sharp questioning, that grew into screaming at some points, Conley also expressed skepticism that people living alone would be able to get the witness Wisconsin requires for absentee ballots and submit photo ID.

Conley did express an openness to extending the deadline by which absentee ballots need to be receive to count. The deadline is currently 8 p.m. on election night.

The president has returned to some of his favorite campaign rally lines, mentioning the “many families” that have been “wiped out” by drug addiction, boasting about the southern border wall, and reminiscing about “All of the caravans coming up, with 10,000, 15,000 people coming up…marching through Mexico.”

Trump is now back to addressing the coronavirus crisis. “Nobody could’ve known a thing like this would happen,” he said.

In fact, the US intelligence community, public health experts and officials in Trump’s own administration had warned for years that the country was at risk from a pandemic, including specific warnings about a coronavirus outbreak.

When this strain of coronavirus, SARS-CoV-2, was identified in Wuhan, China in early January, health experts immediately cautioned that it could turn into a global health crisis. US agencies were tracking the spread of the virus in China and then other countries, and warned that Chinese officials were minimizing the impact.

“Donald Trump may not have been expecting this, but a lot of other people in the government were – they just couldn’t get him to do anything about it,” an unnamed government official told the Washington Post last week. “The system was blinking red.”

An October 2019 draft report by the Department of Health and Human Services, obtained by the New York Times: “drove home just how underfunded, underprepared and uncoordinated the federal government would be for a life-or-death battle with a virus for which no treatment existed,” the Times reported.

The wisdom of the mission now is complicated by an outbreak of coronavirus on a US aircraft carrier docked in the western pacific.


Fewer 100 of the nearly 5,000 sailors assigned to the USS Theodore Roosevelt, now docked in Guam, have tested positive for the virus, but the Navy is moving sailors into various facilities and probably will begin using hotel rooms in the coming days. Navy leaders are talking with government officials in the U.S. territory to identify rooms for the crew members.

Acting Navy Secretary Thomas Modly, however, made it clear that while several thousand will leave the ship, other sailors will remain on board in order to continue to protect the ship and run critical systems.

“We cannot and will not remove all sailors from the ship,” Modly told Pentagon reporters. He said officials will send as many sailors off the ship as possible while still maintaining safety. He said about 1,000 have gone ashore, and that number will grow to at least 2,700 in a couple of days.

“We are not at war. Sailors do not need to die. If we do not act now, we are failing to properly take care of our most trusted asset our sailors,” said Navy Capt. Brett Crozier, the ship’s captain.

The mission that officials are describing now is in-line with the country’s previously announced commitment to enhancing anti-drug operations. But it has likely taken on greater urgency following the indictment of Nicolás Maduro, Venezuela’s socialist leader, last week.

Maduro and his military have been accused of leading a narcoterrorist conspiracy, and snuggling up to 250 metric tons of cocaine a year into the US.

The Trump administration offered $15m reward for Maduro’s arrest, which the Venezuelan leader called the work of a “racist cowboy”.

“This is a particularly important time for this operation to begin,” said defense secretary Mark Esper. According to Esper, as other countries work to protect their populations from the coronavirus threat, they’re getting lax on drug traffickers.

The coronavirus briefing has begun with an overview of the administration’s new “enhanced counter-narcotics operations”. Officials are deploying additional Navy combat ships, aircraft and Coast Guard to the Eastern Pacific Ocean and the Caribbean Sea.

According to Trump, the forces fighting drug traffickers will also have equipment to protect them from contracting coronavirus.