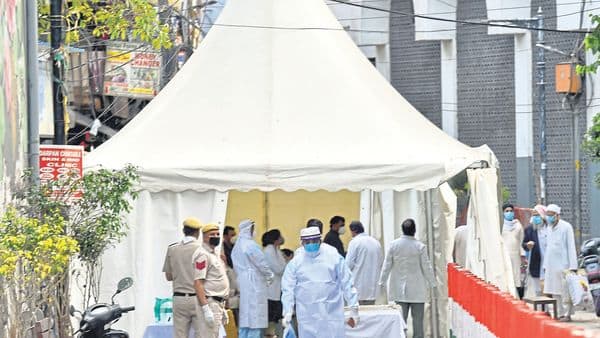 Testing of people for potential coronavirus infection has been limited, despite the government’s decision to extend testing to patients of severe acute respiratory illness, influenza-like illness or severe pneumonia. (Photo: PTI) 3 min read . Updated: 01 Apr 2020, 11:59 PM IST Leroy Leo Symptomatic people staying away due to the fear of being ostracized,…

Despite the surge in covid-19 cases, the 51 private laboratories approved by the government have been operating at a fraction of their capacity due to an acute shortage of testing kits and symptomatic people staying away due to the fear of being ostracized, said top executives of three of India’s largest private chains.

“To be very honest, the eligible ones want to escape. The normal ones, out of curiosity, want testing. This is the unfortunate part,” A. Velumani, chairman and managing director, Thyrocare Technologies, said over the telephone, adding that the stigma around the disease is keeping people away.

“Unfortunately, some also believe the storm will pass in a fortnight after acquiring the disease,” he said.

His observations reflect a general concern among independent experts, a section of whom believe that testing in India is suppressed and the number of covid-19 cases are actually far higher than what has so far been reported.

This, despite the government extending tests to even patients with severe acute respiratory illness (SARI), or influenza-like illness, or severe pneumonia, apart from those with a travel history and their contacts.

“That said, diagnostics is still not widely available due to limited test kits, and most diagnostic labs have only three days’ stock,” said an expert, requesting anonymity.

“I’m currently limited by availability of kits and PPEs (personal protective equipments). Our immediate capacity is around 1,000 tests a day. We are obviously nowhere near the current capacity,” SRL Diagnostics CEO Arindam Haldar said in a telephonic interview, adding that things might get sorted out within a week.

About two weeks ago, the central government allowed private labs to test covid-19 cases. Before that, it was limited to only labs operated by the Indian Council of Medical Research (ICMR).

Dr Lal PathLabs chief executive officer Om Manchanda said the shortage of PPEs and testing kits is being addressed, and it will be fixed in a week.

To be sure, ICMR’s 126 laboratories, which are testing covid-19 cases are also working at an extremely low capacity of around 36%, Raman R. Gangakhedkar, scientist and head of epidemiology and communicable diseases-I division, said earlier this week.

The government believes that there is no evidence of community transmission in India yet. An epidemic reaches the community transmission stage, or stage 3, when authorities are unable to find the source of the infection for a large number of cases, or many tests are positive while conducting randomized surveillance.

However, many cases have been reported wherein the government has failed to establish the source of transmission. Recently, some positive cases in Telangana and Andhra Pradesh were traced back to people who had travelled to Delhi, shows the states’ health bulletins. However, central and state governments refused to answer whether they came in contact with a known patient, further raising concern of undetected community transmission.

According to ICMR, there have been a total of 47,951 tests done till Wednesday for covid-19. This, for a country of a billion-plus population, amounted to just around 35 tests per million people.

In contrast, South Korea has conducted 6,148 tests per million, and Vietnam 159 per million, according to Our World in Data portal.