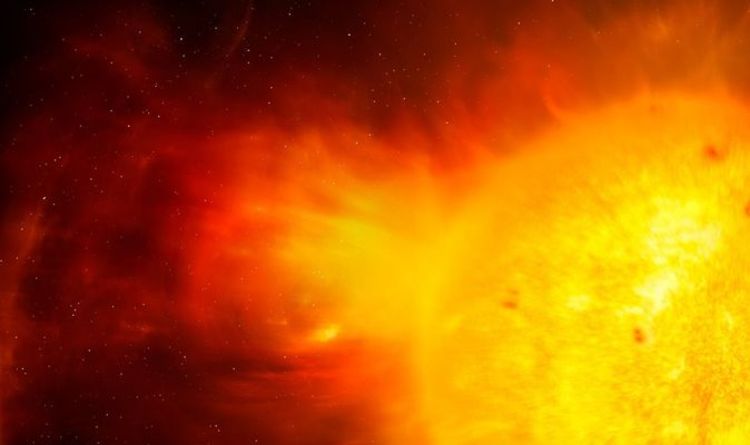 Earth was caught in the midst of a surge of solar particles on March 30 and 31, causing northern lights to be visible as far south as Michigan, USA. However, the Sun is being particularly active at the moment, with another solar storm anticipated for April 4.The stream of particles is now making its way…

Earth was caught in the midst of a surge of solar particles on March 30 and 31, causing northern lights to be visible as far south as Michigan, USA. However, the Sun is being particularly active at the moment, with another solar storm anticipated for April 4.

The stream of particles is now making its way across the 150 million kilometre journey from the Sun to Earth, where they are expected to arrive on Saturday.

Cosmic forecasting site Space Weather said: “Earth is exiting a stream of solar wind that sparked bright auroras around the Arctic Circle on March 30th and 31st. Some of the lights even dipped into the USA as far south as Michigan.

“The next stream of solar wind is due on April 4th.”

As the magnetosphere gets bombarded by solar winds, stunning blue lights can appear as that layer of the atmosphere deflects the particles.

Earth is just a fraction the size of the Sun (Image: GETTY)

However, researchers also note the consequences of a solar storm and space weather can extend beyond northern or southern lights.

For the most part, the Earth’s magnetic field protects humans from the barrage of radiation which comes from sunspots, but solar storms can affect satellite-based technology.

Solar winds can heat the Earth’s outer atmosphere, causing it to expand.

This can affect satellites in orbit, potentially leading to a lack of GPS navigation, mobile phone signal and satellite TV such as Sky.

Additionally, a surge of particles can lead to high currents in the magnetosphere, which can lead to higher than normal electricity in power lines, resulting in electrical transformers and power stations blowouts and a loss of power.

Rarely does an event such as this happen, with the biggest technology-crippling solar storm coming in 1859, when a surge in electricity during what is now known as the Carrington Event, was so strong that telegraph systems went down across Europe.

There are also reports that some buildings set on fire as a result of the electrical surge.

However, a recent study has found that these solar storms should happen every 25 years on average, meaning we are well overdue.

Research from the University of Warwick and the British Antarctic Survey analysed the last 14 solar cycles, dating back 150 years.

The researchers said if it had hit Earth, it could have downed technology on our planet.

Lead author Professor Sandra Chapman, from the University of Warwick’s Centre for Fusion, Space and Astrophysics, said: “These super-storms are rare events but estimating their chance of occurrence is an important part of planning the level of mitigation needed to protect critical national infrastructure.

“This research proposes a new method to approach historical data, to provide a better picture of the chance of occurrence of super-storms and what super-storm activity we are likely to see in the future.”