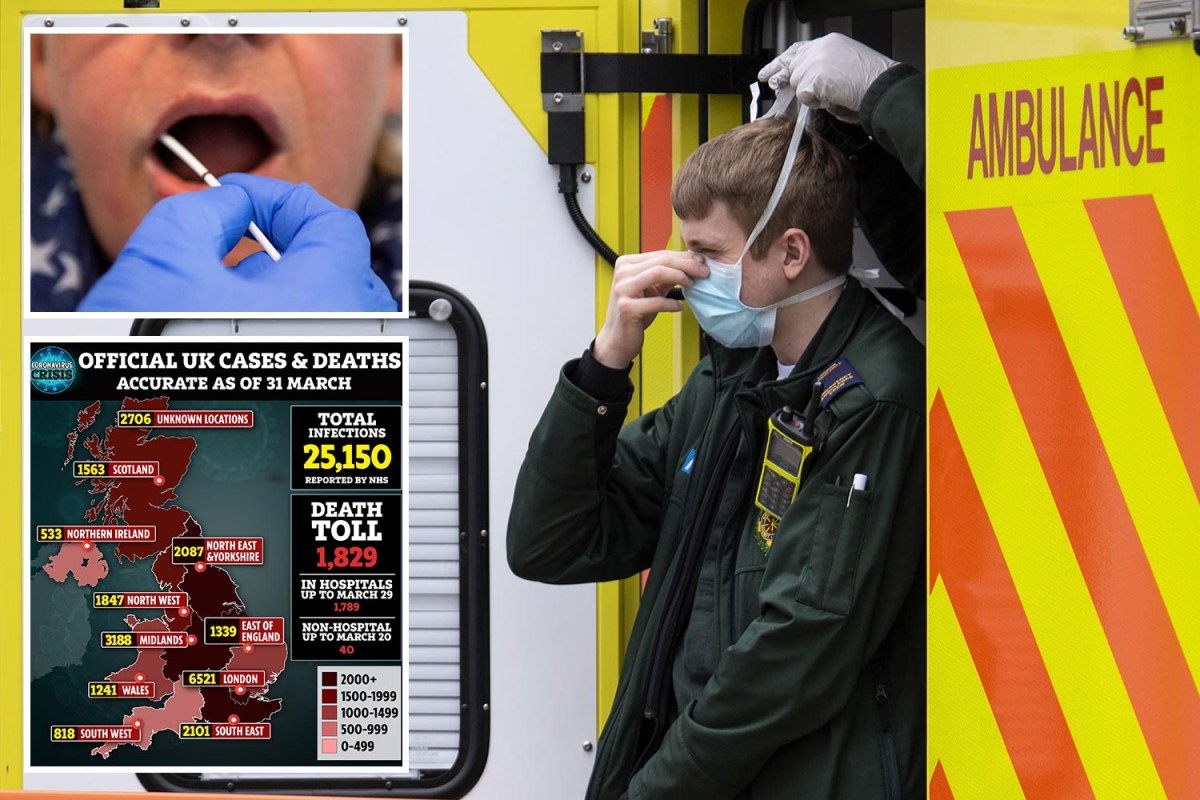 CORONAVIRUS testing in the UK has been delayed after kits were found to be contaminated with Covid-19, it's reported. Key components ordered from overseas for the tests were found to contain traces of the virus earlier this week. ⚠️ Read our coronavirus live blog for the latest news & updates A doctor administers a coronavirus…

CORONAVIRUS testing in the UK has been delayed after kits were found to be contaminated with Covid-19, it’s reported.

Key components ordered from overseas for the tests were found to contain traces of the virus earlier this week.

It comes as Britain attempts to ramp up mass testing after capacity appeared to lag behind other major nations, including the US and Germany.

To meet demand and boost production, the government has enlisted private companies to help – with plans for thousands of kits to be made available within the coming weeks.

But in a blow to production one of those suppliers sent an email on Monday to government laboratories in the UK warning that a delivery of “probes and primers” would be delayed because it was contaminated, the Telegraph reported.

CORONAVIRUS CRISIS – STAY IN THE KNOW

Don’t miss the latest news and figures – and essential advice for you and your family.

To receive The Sun’s Coronavirus newsletter in your inbox every tea time, sign up here.

Get Britain’s best-selling newspaper delivered to your smartphone or tablet each day – find out more.

Eurofins, which is based in Luxembourg, admitted there had been “an issue” but said other private providers had suffered the same problem.

It’s unclear how the components were contaminated and senior health sources told the newspaper that the delay wouldn’t significantly impact the UK’s testing programme.

It comes as Boris Johnson chaired a meeting of his Cabinet by videolink on Tuesday, as he continues to self-isolate in Downing Street after testing positive for coronavirus.

The Prime Minister has faced heavy criticism over shortages of personal protective equipment (PPE) for frontline NHS staff as well as the slow rollout of testing.

All Cabinet ministers dialled into the meeting, with only civil service chief Sir Mark Sedwill and a small number of officials in the Cabinet room in Downing Street, following the rules and keeping two metres apart.

The Prime Minister told the meeting: “The rising death toll in recent days showed the vital importance of the public continuing to stick to the social distancing guidance which has been put in place by the Government, based on scientific and medical advice.”

Former health secretary Jeremy Hunt has voiced further concerns about the lack of testing in the UK after it emerged the Government had still not hit its target of 10,000 tests a day.

This is despite earlier claims by Mr Hancock that the target had been reached.

The World Health Organisation (WHO) has urged countries to “test, test, test” as a key part of its strategy to beat the virus.

But officials have admitted the UK does not have the same capacity as other countries that are testing more, including Germany which is conducting around 70,000 per day.

Mr Hunt told the Guardian: “The big advantage we now have is evidence that testing works in other countries.

“We can see that Asian countries have been spectacularly more successful than European ones in avoiding mass lockdown.”

It comes as a 19-year-old with no underlying health conditions has died in hospital after testing positive for Covid-19, NHS England has said.

The teenager was among 367 new deaths in England’s hospitals announced on Tuesday.

The jump is by far the biggest day-on-day rise in the number of deaths since the outbreak began.

It means the total number of deaths is 27 per cent higher than the equivalent figure the day before.

It comes as other figures revealed that the true death toll is higher than hospital statistics suggest.

Data from the Office for National Statistics (ONS) for England and Wales shows there were 24 per cent more deaths relating to Covid-19 up to and including March 20, compared to hospital-only data for the same period.

The ONS looked at all deaths where Covid-19 was mentioned as a factor, including hospital deaths and those in the community and care homes.

Marks & Spencer to give staff 15% bonus to say thanks

‘Healthy’ chef, 19, killed by virus in London ‘would have survived in Italy’

Bin collections during coronavirus lockdown – will they be collected?

A total of 210 deaths in England and Wales for the time period had Covid-19 mentioned on the death certificate, compared with 170 coronavirus-related deaths reported by NHS England and Public Health Wales.

Hospital figures are of people who have tested positive for Covid-19, whereas the ONS includes all deaths where Covid-19 is mentioned on the death certificate, even if only suspected.

However, the ONS data does provide a much wider picture of what may be happening in the community.

Brits should only go shopping ONCE a week to cut down on coronavirus risks, minister says