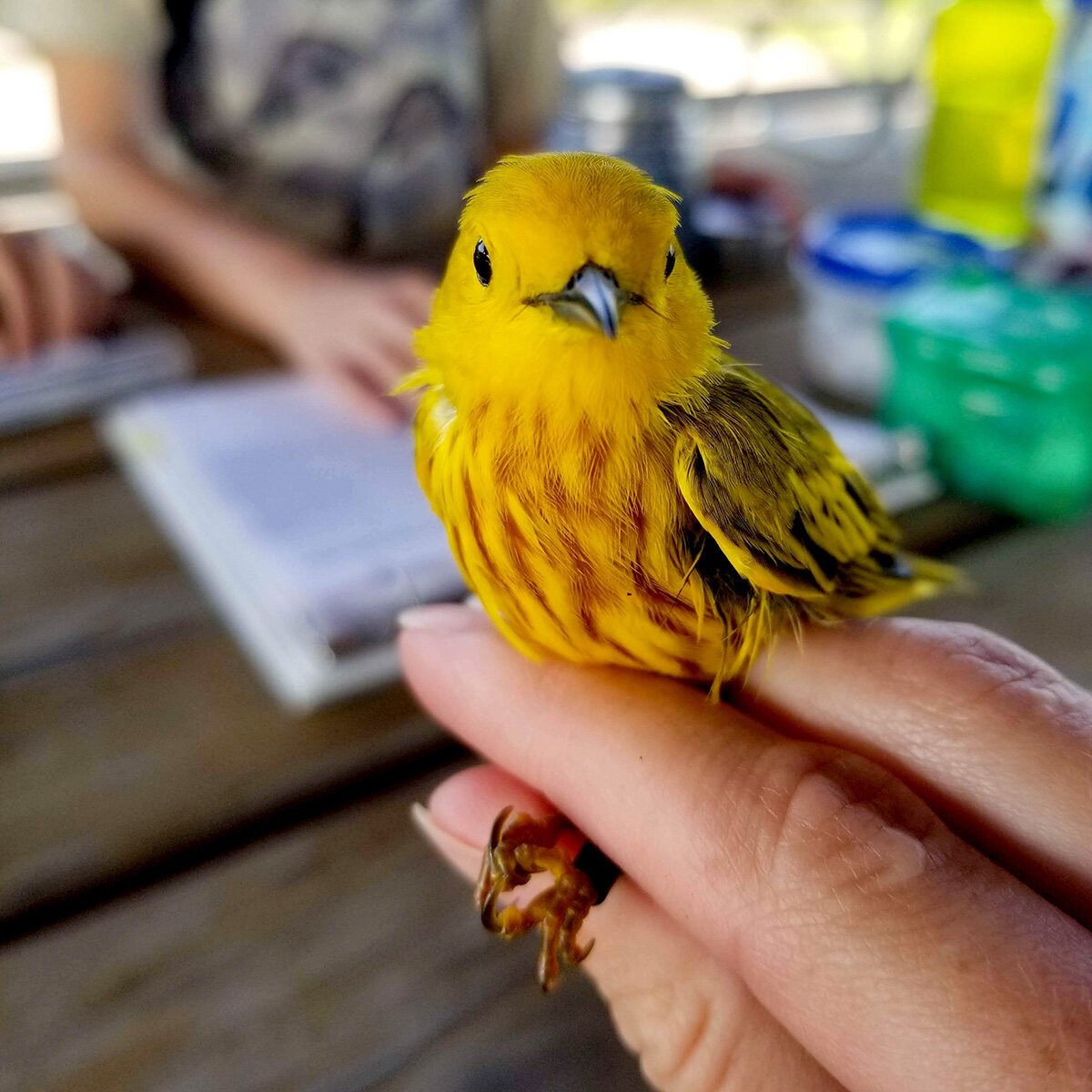 Yellow warblers have evolved a special "seet" call that warns other warblers when cowbirds are nearby. Credit: Shelby Lawson This is the story of three bird species and how they interact. The brown-headed cowbird plays the role of outlaw: It lays its eggs in other birds' nests and lets them raise its young—often at the…

This is the story of three bird species and how they interact. The brown-headed cowbird plays the role of outlaw: It lays its eggs in other birds’ nests and lets them raise its young—often at the expense of the host’s nestlings. To combat this threat, yellow warblers have developed a special “seet” call that means, “Look out! Cowbird!”

In a new study, researchers at the University of Illinois at Urbana-Champaign report that red-winged blackbirds respond to the seet call as if they know what it means.

“Does this mean red-winged blackbirds understand that the call is specific to cowbirds or are they just responding to a general alarm?” said graduate student Shelby Lawson, who led the study with Mark Hauber, a professor of evolution, ecology and behavior at the U. of I. The researchers sought to answer that question by playing back the calls of several bird species in warbler and blackbird territories to see how the birds reacted.

They report their findings in the journal Communications Biology.

“We know that eavesdropping on the calls of other species is common across the animal kingdom,” Lawson said. “Birds do it. Mammals do it. There are studies of different primates that do it—and even birds that listen in when they do.”

In the rainforests of Ivory Coast, for example, tropical birds known as hornbills have deciphered some of the calls of the Diana monkey. The hornbills ignore the monkeys’ alarm calls for ground predators, which are no threat to the birds, but heed the monkeys’ calls for hawks, which are predators of hornbills.

“Chickadees have very general alarm calls that we now know signal the size of different predators,” Lawson said. “A lot of birds will listen to these calls and respond based on the danger posed to them. There’s also a study of nuthatches listening to chickadee calls.”

But all these studies look at alarm calls directed at predators that can kill adult animals, Lawson said.

“Yellow warblers are the only bird we know about that has developed a specific call for a brood parasite,” she said. “When they see a brown-headed cowbird, yellow warblers will make the seet call and then females that hear the call will go back to their nest and sit on it tightly to protect their eggs. They only do this with cowbirds. They don’t seet at predators or anything else.”

In an earlier study, Lawson and her colleagues were playing audio of seet calls to study warbler behavior when they noticed that red-winged blackbirds were also responding aggressively to the calls. This prompted the new study.

To learn what the red-winged blackbirds understood about the calls, the researchers played a variety of bird calls in red-wing and yellow warbler territories and watched how the birds responded. They found that the red-winged blackbirds responded identically to the seet calls, the sound of cowbird chatter and blue jay calls—all of which signal a threat to their nests.

“They responded very aggressively to these calls, more so than they did to the warbler ‘chip’ call, which is just a general antipredator call,” Lawson said. When red-wings heard the warblers seeting, they flew close to the loudspeaker and looked around for the threat, she said.

When red-winged blackbirds see any kind of predator in their territory, they swoop at it and dive bomb it. Male red-wings have so many mates in so many nests that they must defend a wide territory from interlopers and threats, Lawson said. This is why red-winged blackbirds are known as the “knights of the prairie.”

In defending their own nests from predators, they end up helping out other bird species—in particular, yellow warblers. Previous research shows that yellow warblers that nest near red-winged blackbirds suffer less from cowbirds laying their eggs in their nests.

The warblers also appear to help the blackbirds by warning of nest predators, the researchers said.

“We found that the red-winged blackbirds that nest really close to the warblers respond more strongly to the seet calls than those that nest far away,” Lawson said.

The researchers have more work to do to determine whether the blackbirds understand that the seet call means “cowbird,” specifically, or if it is just interpreted as a general danger to the nest. In a future study, the researchers will play the seet call to re-wings at the end of the nesting season to see if the blackbirds respond as aggressively to the sound after their eggs have hatched. Yellow warblers stop making the seet call when their nestlings are secure and too old to be bothered by cowbirds.

“This is the first report of a bird eavesdropping on another species’ warning of a brood parasite,” Hauber said. “We don’t yet know if the red-winged blackbirds understand that the warning is specific to cowbirds, but it’s obvious they understand that the call represents a threat to the nest—and that benefits them.”

Citation:
When warblers warn of cowbirds, blackbirds get the message (2020, March 31)
retrieved 31 March 2020
from https://phys.org/news/2020-03-warblers-cowbirds-blackbirds-message.html