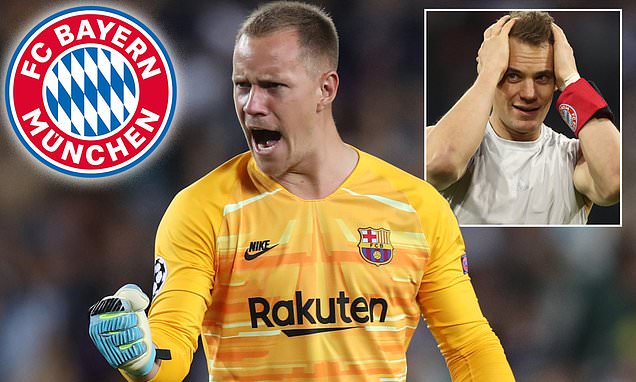 By Pete Jenson for MailOnline

Bayern Munich are planning to move for Barcelona goalkeeper Marc-Andre ter Stegen, according to reports in Spain.

The German, who will be 28 next month, has seen contract talks with Barcelona stall in recent weeks just as Bayern have shelved talks with Manuel Neuer over a new deal.

The German side offered their 34-year-old goalkeeper a one year extension which he rejected and it now seems he will go into the last year of his deal un-renewed.

Bayern have already signed Alexander Nübel from Schalke 04 and see the 23-year-old as one the best young keepers in Germany.

But if they can sign the man most believe is now Germany’s unofficial number one they will. According to Diario Sport, the deal for £80m-rated Ter Stegen could even eclipse the current world record for a keeper.

Chelsea hold that record after spending £72million on Kepa Arrizabalaga from Athletic Bilbao, but Sport say Bayern are urging Ter Stegen not to extend his current deal with Barcelona. That would enable them to sign him for nothing in 2022.

Barcelona will not want to lose the player they signed from Borussia Monchengladbach in 2014 without a fee.

They have insisted the player will sign a new deal at the club but they also need to raise money in the transfer market this summer to finance another bid for Neymar.

Even with only two years left on his existing contract the Catalan club is well aware that Ter Stegen would represent a huge profit on the £10.7 million they paid for him six years ago.