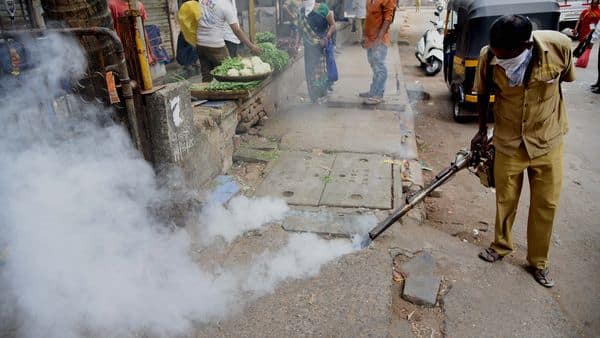 A worker fumigates a pavement during day-2 of a nationwide lockdown, imposed in the wake of coronavirus pandemic (PTI) 3 min read . Updated: 27 Mar 2020, 10:55 PM IST Srishti Choudhary, Neetu Chandra Sharma The preparations have already begun in Delhi, where government has started scaling up its health infrastructure Stage 3 is community…

New Delhi: India has begun preparing for Stage-3 of the outbreak following recommendation from members of the COVID-19 task force, even as Indian Council of Medical Research (ICMR) continues to maintain that there is no evidence of community transmission in the country yet.

The preparations have already begun in Delhi, where the government has started scaling up its health infrastructure to handle the evolving situation.

“I have received the report from our panel of doctors recommending measures to prepare for a potential Stage 3 outbreak of COVID-19 in Delhi. We are ramping up our capacity for an eventuality of 1,000 daily positive cases, for testing, treatment and isolation,” Kejriwal said during a press briefing on Friday.

Delhi has so far recorded 40 infected cases and one death.

According to scientists, three stages for the transmission of covid-19 are being discussed. These can be explained as Stage 1 which is when the country receives imported cases, stage 2 is local transmission when persons can get the infection from known sources.

Stage 3 is community transmission, when the source of infection is not known for majority of the infected population and new positive cases can no longer be traced to diagnosed cases. This would mean, the scale of the outbreak increases.

According to the government, currently India is largely reporting cases either having a travel history to the virus hit countries or contact history with an infected person.

“When cases with no travel history or direct contact to diagnosed cases start coming in large numbers, then we take it as a beginning of community spread. Though in that sense, we are not in Stage 3, but it would be better that we do our preparations as if we are in phase-3. In case of community rise, numbers start rising exponentially,” said Dr Girdhar Gyani, Director General, Association of Healthcare Providers.

According to Indian Council of Medical Research (ICMR), India still remains at Stage 2 (local transmission) and is yet to enter Stage-3 of the disease cycle.

“We started implementation of strategies way early, while few other countries started late. We do not have community transmission yet,” said Dr Raman R Gangakedkar, Head of Epidemiology and Communicable Disease at Indian Council of Medical Research (ICMR), New Delhi, the apex body for biomedical research in India.

India also looks to expand its testing capacity over the next few days, as more private laboratories come on board. Private hospitals, too have begun gearing up to help when there is likely surge in infected cases by creating adequate number of isolation wards.

“India is currently between Stage 2 and Stage 3 of the covid-19 disease spread. The Government is taking the right measures to curtail its spread. We can support the governments efforts towards testing of a symptomatic individual currently and later asymptomatic individuals, as it may be required to augment the travel ban, identify individuals with the infection, isolate them so that the virus can be curtailed,” said Dr. GSK Velu, Chairman and Managing Director, Neuberg Diagnostics Private Limited, that recently started testing for covid-19.

India has so far recorded 804 cases and the numbers continue to surge. On Friday, as many as 101 new cases were found positive. At least 17 have succumbed to the disease and 67 have recovered.

Leroy Leo contributed to the story