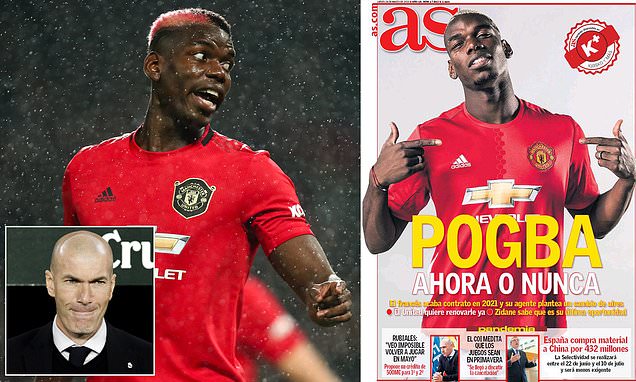 By Amitai Winehouse For Mailonline

Real Madrid must act quickly to sign Paul Pogba as Manchester United are set to hold talks over extending his deal, according to reports.

Pogba is a long-term target for Real, with manager Zinedine Zidane particularly keen on signing his compatriot, and they previously tried to sign the midfielder back in 2016.

Now, according to Spanish newspaper AS, they might be under pressure to make a move for him this summer if they ever want to bring him to the Santiago Bernabeu.

Real Madrid must move ‘now or never’ for Manchester United’s Paul Pogba, according to AS

Pogba’s contract with United runs out in the summer of 2021, although United hold an option to extend it by a further year.

But AS are reporting that if they trigger that extension, it would only serve to annoy Pogba and force him out – or see him leave for free a year later.

Even if that happens, Real would not be able to get Pogba until 2022, by which point it is uncertain whether they would still be interested.

AS reflect this in their headline on Thursday: ‘Now or never’.

United will have to try and renew Pogba’s contract this summer to try and avoid him entering the last year of his deal.

Real have an opportunity due to United’s ongoing spat with Pogba’s agent Mino Raiola, which has not been helped by comments from both Raiola and Ole Gunnar Solskjaer over the last year.

The report suggests Pogba could leave United for just £73million, a drop on the £86m they paid for him four years ago.

It would represent a serious boost for Zidane, who sees Pogba as perfect for the Real side he is now trying to build – which is focused on rapid transitions from defence to attack.

The 27-year-old has struggled for action this season due to a niggling ankle injury that has seen him spend months on the sidelines.

Ole Gunnar Solskjaer speaking to Pogba, who has struggled with injuries this season