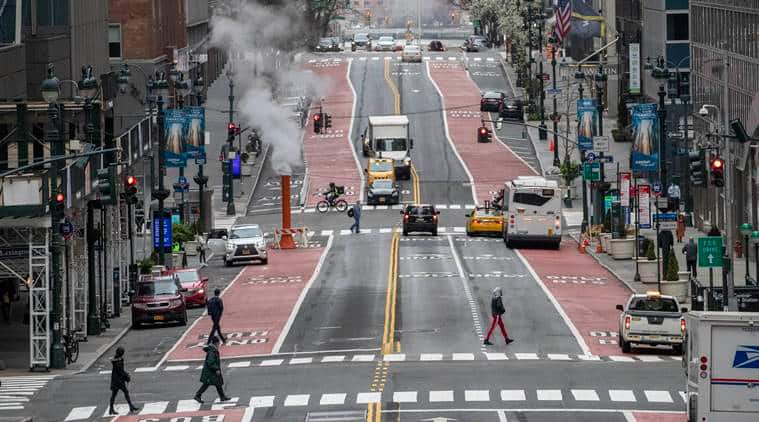 By: Reuters | New York | Updated: March 26, 2020 1:05:04 pm The rate of hospitalizations in New York has slowed in recent days, Governor Andrew Cuomo said, with numbers he called “almost too good to be true.” (AP Photo/Mary Altaffer)New York state, leading the nation in coronavirus infections and deaths, is showing tentative signs…

The rate of hospitalizations in New York has slowed in recent days, Governor Andrew Cuomo said, with numbers he called “almost too good to be true.” (AP Photo/Mary Altaffer)

New York state, leading the nation in coronavirus infections and deaths, is showing tentative signs of curbing the spread of the disease, the governor said on Wednesday, even as fatalities in New York City jumped while the health crisis deepened in hard-hit New Orleans and elsewhere.

The rate of hospitalizations in New York has slowed in recent days, Governor Andrew Cuomo said, with numbers he called “almost too good to be true.” He also hailed the enlistment of 40,000 retired nurses, physicians and other medical professionals signing up for a “surge health care force,” but warned much remains to be done.

In an ominous sign he and other governors are preparing for the worst, the states of New York, North Carolina and Hawaii requested the Federal Emergency Management Agency send special mortuary teams that can be deployed for mass casualties, FEMA said on Wednesday.

New Orleans, where large crowds celebrated Mardi Gras a month ago, was on track to become the next U.S. epicenter, as Louisiana’s Gulf Coast metropolis recorded the world’s highest growth rate in coronavirus cases.

Cuomo announced new steps aimed at containing the virus. New York City – home to over 8 million people – closed some of its largely empty streets to vehicle traffic to allow more room for pedestrians to walk with greater social distancing.

At a news conference, Cuomo said the city also would ban basketball and other contact sports in public parks, while lamenting the challenges posed by dense populations. “Our closeness makes us vulnerable,” he said.

Nationwide, nearly 68,000 people have been diagnosed with COVID-19, the respiratory illness caused by the highly contagious virus, as the U.S. death toll approached 1,000. Only two other nations – China and Italy – have more cases of the virus, which is particularly perilous to elderly people and those with underlying chronic health conditions.

At least 30,800 people have tested positive for the virus in New York State and more than 17,800 in New York City alone. By Wednesday night, the number of coronavirus fatalities had climbed to 280, up 81 from the number reported hours earlier when the state-wide death toll stood at 285. An updated toll for the state was not immediately available.

New Orleans, where large crowds celebrated Mardi Gras a month ago, was on track to become the next U.S. epicenter.

New York State as a whole, accounting for roughly half the country’s known infections, followed California last week in ordering non-essential businesses to close and to direct residents to stay home as much as possible.

As of Wednesday, the governors of at least 21 states, representing more than half the U.S. population of 330 million, have imposed such restrictions, designed to curb transmission of the virus by limiting congregations of people.

Even before states began adopting those measures last week, the pandemic paralyzed parts of the U.S. economy and upended daily life as schools and colleges closed and workplaces shuttered voluntarily or under local government orders.

The crisis, sparking projections of a global recession amid tumbling stock prices, has put public health authorities at odds with President Donald Trump, who had pointed to a robust economy and stock market in making his case for re-election in November.

Trump this week has pushed to reopen commerce by April 12, Easter Sunday, and on Wednesday blamed news outlets for exerting pressure to keep restrictions in place.

“The LameStream Media is the dominant force in trying to get me to keep our Country closed as long as possible in the hope that it will be detrimental to my election success,” Trump wrote in a tweet.

“The real people want to get back to work ASAP.” Health experts insist reopening businesses and schools too soon would only risk fuelling transmission of the virus, overwhelming a hospital system already facing equipment and personnel shortages, and ultimately worsen the economic fallout.

Cuomo cited recent coronavirus hospitalization figures in his state as evidence that social distancing was starting to work. While hospitalizations had been doubling every two days as of Sunday, those numbers were doubling every 3.4 days by Monday, and by Tuesday the rate was every 4.7 days, Cuomo said.

“This is a very good sign and a positive sign, again not 100% sure it holds … but the arrows are headed in the right direction,” Cuomo said. Diagnostic testing remained a challenge in New York and around the country.

At Elmhurst Hospital Center in New York’s Queens borough, scores of people, most wearing surgical masks, lined up on Wednesday to be tested at a tent outside.

Dr. Ashley Bray, 27, a general medicine resident interviewed by the New York Times, described the situation inside the 545-bed hospital as “apocalyptic,” recounting how she performed chest compressions on at least three coronavirus patients, one after the other, all of whom eventually died.

The deteriorating situation in New Orleans dashed hopes that less densely populated cities and those in warmer climates might escape the worst of the pandemic.

Local authorities have warned that hospitals in the Mississippi River port city could reach the point of collapse by April 4. Trump issued federal disaster declarations for Louisiana and Iowa late on Tuesday and for Texas and Florida on Wednesday, freeing up federal funds to help states cope.

“People don’t know what to expect or how long this will last. Everyone is worried about their jobs,” said Evans, 32, whose restaurant Blue Oak BBQ is a few steps from the renowned Bourbon Street.

The restaurant is offering takeout orders only. “This is as bad as Katrina or worse,” he said, referring to the hurricane that devastated the city in 2005.

Here’s a quick Coronavirus guide from Express Explained to keep you updated: Are smokers at high risk form coronavirus? | Can Vitamin-C prevent or cure coronavirus infection? | What exactly is community spread of coronavirus? | How long can the Covid-19 virus survive on a surface? | Amid the lockdown, what is allowed, what is prohibited?