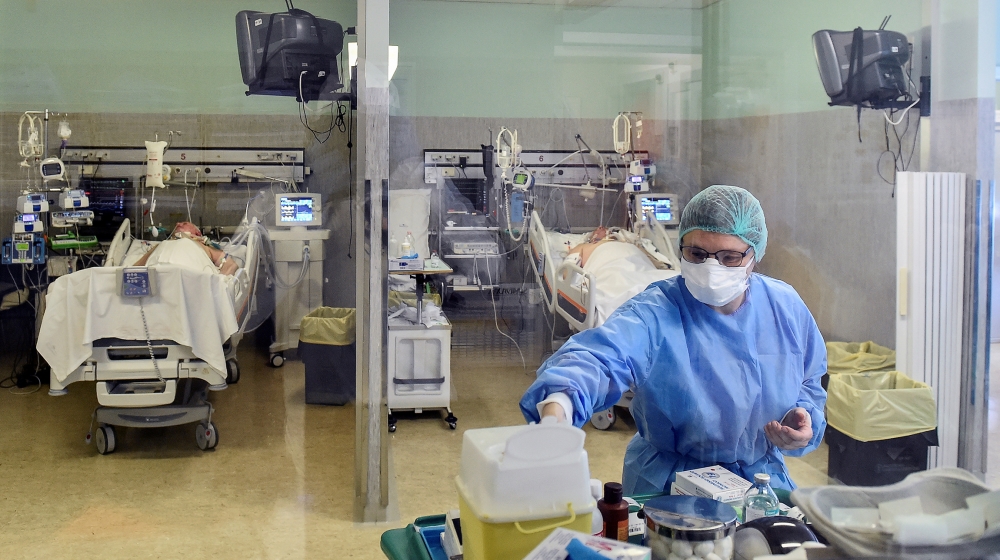 Names marked with an asterisk* have been changed to protect identities. Turin, Italy - It is 5am and Annalisa Baldi is about to start her shift in a COVID-19 ward at the Cremona hospital, southeast of Milan, in Lombardy. Wearing her usual uniform and a surgical mask, the 34-year-old nurse heads to the dressing area to prepare.…

Names marked with an asterisk* have been changed to protect identities.

Turin, Italy – It is 5am and Annalisa Baldi is about to start her shift in a COVID-19 ward at the Cremona hospital, southeast of Milan, in Lombardy.

Wearing her usual uniform and a surgical mask, the 34-year-old nurse heads to the dressing area to prepare.

She thoroughly washes her hands with special sanitiser and puts a protective suit on top of her clothing. She pulls on a pair of gloves.

“Until the end of my shift, these gloves become my skin,” Baldi told Al Jazeera. “I wash and disinfect them any time I can. I also add more layers of gloves throughout the day.”

Two masks – one for her own protection and the other to shield the patients, scuba-diving goggles and a cap complete her armour.

In her ward today, there are 66 people aged between 50 and 70. There are also some younger patients.

“This virus doesn’t only affect elderly people with underlying conditions,” Baldi said, adding that the large hospital is mostly dedicated to the coronavirus emergency.

At 5:30am, medical personnel bustle about the wards.

To avert contagion, direct contact with patients is avoided where possible.

“One needs to do as much as one can in one go, in their rooms,” Baldi says. “This includes helping patients drink. This might sound a small detail, but when patients wear fixed continuous positive airway pressure [CPAP] devices, spanning helmets and full-face masks, getting a chance to drink is essential.” Anna Baldi has written ‘Nurse Anna’ on her protective gear so patients can identify her easily [Courtesy: Annalisa Baldi]

Only patients with a high fever and who need significant levels of oxygen support are currently hospitalised in Italy, where so far 6,820 have died from the virus that has infected 69,176 people.

Besides monitoring high respiratory rates and shortness of breath, medical staff review arterial blood gas tests, which measure the percentage of oxygen in the blood.

A patient’s condition can change immensely each day.

Oxygen values might drop very fast, requiring intubation and intubation time for COVID-19 patients that is long – 20 days on average.

“This is a new, different patient. Doctors and nurses are outperforming themselves. It is extremely emotional to witness,” said Baldi.

She believes has probably had coronavirus, like many of her colleagues on the front lines, but that her symptoms were imperceptible.

The percentage of health workers infected in Italy is more than double the number registered throughout the epidemic in China – more than 5,000 since the onset of the outbreak in February, in part due to a shortage of protective equipment.

Public health experts say that if all medics were tested, the actual rate of infection could be so high that it would stop hospitals from functioning.

In Bergamo, at least 6,000 citizens are currently infected, making it Italy’s – and the world’s worst-hit province in percentage terms.

Hundreds have died there. Ambulance sirens continuously blare through the silence of the city on lockdown.

Roberto Cosentini, the hospital’s first aid coordinator, has said the pandemic feels like a “viral earthquake”.

“It is like we had a new telluric shock every day, with scores of new patients suffering simultaneously. Now the difficulty is to move patients who have slightly improved to make space for those who have more serious conditions,” he told local media.

Patients are like candles that start flickering, before becoming feeble and eventually going out. Wheezing and shortness of breath precedes death.

Enrico* is a hospital specialist in the coronavirus wards.

Like Baldi, he believes he has had the virus, although showing few symptoms. Medics in the hospital are now provided with necessary protective gear.

“The disease is unpredictable. Patients are like candles that start flickering, before becoming feeble and eventually going out. Wheezing and shortness of breath precedes death. Patients with several underlying conditions are not taken to the ICUs. We do all we can to accompany them gently into their deaths,” he said grimly, adding there was an enormous sadness around them.

“They are afraid, alone and isolated. It is excruciating to see them dying like this. It is devastating to call their families,” he said.

But with some hope, he noted the number of patients being discharged. Nationwide, of almost 70,000 people infected, more than 8,000 have recovered.

Valentina*, an anesthesiologist in an ICU in Milan, said while her team had protective equipment, colleagues in other hospitals in the city were still tending to patients only with surgical masks.

“We are exhausted, both physically and psychologically,” she told Al Jazeera.

“This disease creates such uncertainties that even those most prepared to face extreme situations and take difficult decisions break under the pressure.”

Performing complex procedures such as intubation while wearing protective gear can be exhausting.

“People keep coming in. You already know some of them they won’t make it. Patients die of suffocation. What makes it even harder is that there is no end in sight,” said Valentina.