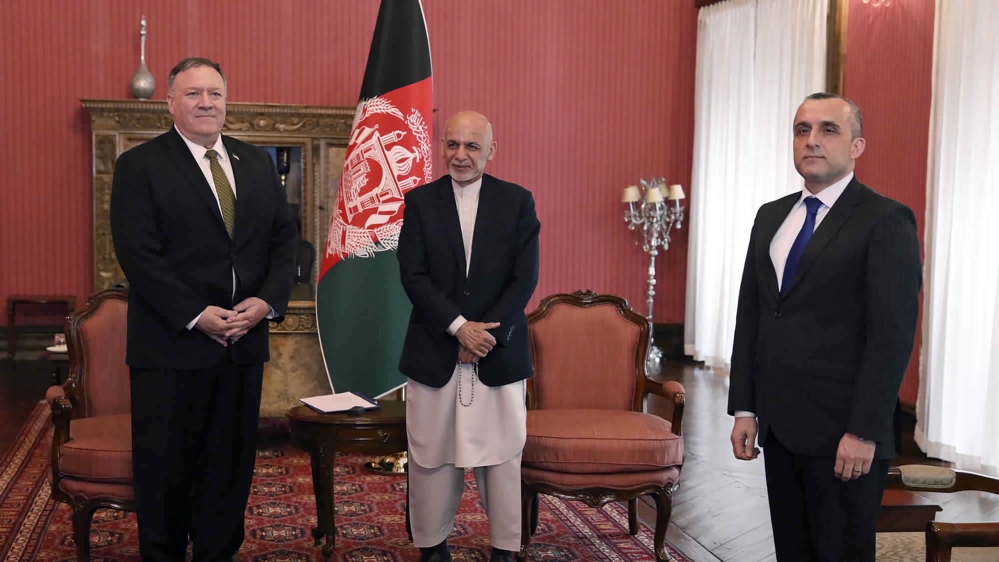 US Secretary of State Mike Pompeo on Monday announced a $1bn cut in American aid to Afghanistan after he failed to convince Afghan President Ashraf Ghani and his political foe to end a feud that has helped jeopardise a US-led peace effort. The United States also is prepared to cut another $1bn worth of assistance…

US Secretary of State Mike Pompeo on Monday announced a $1bn cut in American aid to Afghanistan after he failed to convince Afghan President Ashraf Ghani and his political foe to end a feud that has helped jeopardise a US-led peace effort.

The United States also is prepared to cut another $1bn worth of assistance in 2021 and is conducting “a review of all of our programmes and projects to identify additional reductions and reconsider our pledges to future donor conferences for Afghanistan,” Pompeo said in a statement.

Pompeo’s statement came as he flew home from a fruitless day-long effort in Kabul to end competing claims to the presidency by Ghani and Abdullah Abdullah and win their agreement to form “an inclusive government.”

The harshly worded announcement at the end of the mission he undertook despite the spreading global coronavirus pandemic underscored how badly stalled the US-led effort to end America’s longest war and decades of strife in Afghanistan has become.

The US “deeply regrets” that Ghani and Abdullah were “unable to agree on an inclusive government,” said Pompeo, adding that “their failure has harmed US-Afghan relations and sadly, dishonours those Afghan, Americans, and Coalition partners who have sacrificed their lives and treasure.” Pompeo also met separately with Afghan leader Abdullah Abdullah at the Sepidar Palace in Kabul on Monday, but he failed to negotiate an agreement with Abdullah’s rival, Ghani [Sepidar palace via AP]

The US pays billions every year towards the Afghan budget, including the country’s defence forces.

Afghanistan barely raises a quarter of the revenue it needs to run the country, giving Pompeo considerable financial leverage to force the two squabbling leaders to overcome the impasse.

On his way back to Washington, DC, Pompeo landed at a military base in Qatar for a 75-minute meeting with Taliban officials, including their top negotiator, Mullah Baradar Akhund.

Speaking to reporters after departing Qatar, Pompeo declined to detail how the $1bn in aid cuts would be apportioned or whether he set a deadline for Ghani and Abdullah, who had served as the country’s chief executive, to settle their dispute.

But he indicated that the aid cut could be cancelled if they came to an agreement.

“We are hopeful, frankly, that they will get their act together and we won’t have to do it. But we’re prepared to do that,” he said.

In the meantime, he said, the US would continue backing Afghan security forces while continuing a phased “conditions-based” troop withdrawal as specified in a deal signed with the Taliban in Doha on February 29.

He said despite continuing fighting, the Taliban largely have fulfilled a commitment to reduce violence and were working to form a team for intra-Afghan talks.

Pompeo’s mission came nearly a month after his last visit to Doha for the signing of the February 29 deal with the Taliban. Ghani’s government was not a party to the agreement.

The agreement was to have been followed by the opening by March 10 of negotiations on a political settlement to decades of strife between the Taliban and a delegation of Afghans that would include government officials.

But the process stalled over a Taliban demand for the release by Kabul of 5,000 prisoners and the feud between Ghani and Abdullah, both of whom claimed the presidency following a disputed September election marred by allegations of fraud.

While in Kabul, Pompeo met with Ghani and Abdullah, separately and together.

Absent from the meetings was the chief US negotiator, Special Representative Zalmay Khalilzad, an Afghan-born veteran diplomat. It was not immediately known why Khalilzad was not included.

A senior State Department official, speaking before the meetings ended, said the purpose of Pompeo’s visit was to try to mediate a solution between the two men.

“The fear is that unless this crisis gets resolved … soon, that could affect the peace process … our agreement with the Talibs could be put at risk,” the official said.

Pompeo’s visit was also extraordinary for the fact that the US, like the United Nations, had earlier said it would not be drawn into mediating feuding Afghan politicians as it did in 2014 presidential polls.

While the Afghan election commission this time gave the win to Ghani, Abdullah and the election complaints commission charged widespread irregularities to challenge Ghani’s win.

A spokesman for Ghani declined to comment, saying details of the meetings had not yet been released.

Omid Maisam, a spokesman for Abdullah, said that if there were more meetings a solution was “not impossible” and that they wanted a peaceful end to the crisis.