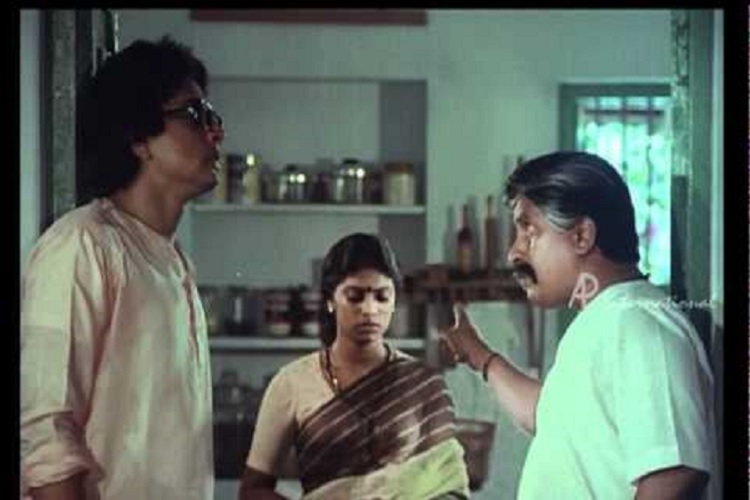 Visu's positioning in the world of cinema was simple. That of a writer of emotional subjects around middle-class families and their value systems.Well-known playwright, writer, actor, director and talk show host Visu passed away on March 22. Incidentally, it was a day in which the whole of India stayed largely at home, spending time with…

Visu’s positioning in the world of cinema was simple. That of a writer of emotional subjects around middle-class families and their value systems.

Well-known playwright, writer, actor, director and talk show host Visu passed away on March 22. Incidentally, it was a day in which the whole of India stayed largely at home, spending time with their families because of the Janata Curfew. If this had happened when Visu was in his prime, he might have said this through his character – “Intha coronavirus naala veetula ukkarnthu velai seiyarathukku naan vekka padala, vedana padala, oru vidhathula sandosha padaren. Yenna, antha saakula, ellarum kudumbathoda sernthu irukkom!” (I’m not ashamed or pained to sit at home and work because of this coronavirus. Because, with this excuse, we’re all together with our family!) Of course he would have written it much better than this, but you get the drift.

“Kudumbam” or family was at the centre of all his imagination. His plays and subsequently films mostly revolved around day to day issues that crop up in a family. That too a middle-class family. In marketing, we call it “brand positioning” – this is nothing but how a consumer perceives a brand in their mind. As far as Visu was concerned, his positioning in the world of cinema was simple. That of a writer of emotional subjects around middle-class families and their value systems. With this positioning, he owned a niche which was difficult for anybody else to occupy. Years later, he would also use the same positioning to become a very successful talk show anchor.

Before Visu, the middle-class space in Tamil cinema was occupied by none other than his guru – K Balachandar.  But KB, as he was fondly known, gradually expanded his scope and scaled many new frontiers.  By then, Visu who was looking at opportunities to graduate from the stage to films, moved in quickly and entrenched himself in that vacant slot. After associating with KB in a few films as an assistant director and as a writer, Visu found his sweet spot in Kudumbam Oru Kadambam which he wrote and acted for the first time.

Before this, Visu made a mark for himself quietly in Tamil films as a writer. Thillu Mullu – KB’s super hit comedy film featuring Rajinikanth in dual roles, till today remains a milestone in Rajinikanth’s career for his comic role. KB’s casting coup apart, the other highlight of the film is the writing which was Visu’s.  There must be very few belonging to the ‘80s generation who do not know the lines in that interview scene featuring Thengai Srinivasan from Thillu Mullu!

Visu’s initial films were mostly big screen versions of his own plays. And the look and feel were still akin to a play with simple sets and many characters.  By his own admission, Visu said that though he was a known director after his initial few films like Kanmani Poonga and Manal Kayiru, it was only after his super-duper hit film Samsaram Athu Minsaram that he became a household name. With this film, he not only endeared himself to the audience but to the producers as well as a filmmaker who knew his craft and boundaries.

Visu was a producer’s delight. His movies did not demand expensive set properties, hordes of junior artists, action sequences or even elaborate song sequences. He didn’t go after star actors either. Visu just focussed on the storyline, his writing and in getting his casting right with key character artists like S Ve Shekhar and Manorama who were regulars in his films. His films therefore were made on a shoestring budget and on tight timelines. It would be eye-popping today to know that a mighty hit like Samsaram Athu Minsaram was made on a total budget of Rs 16-17 lakhs. Even by the standards of the ‘80s, it was a very small budget but one that brought in huge returns to the entire value chain, from the producer to the distributors and to the exhibitors. That the film also won the National Award for the Best Popular Film in that year was a crowning glory for Visu after the box-office success.

Visu was the undisputed king of joint family subjects in Tamil cinema in the ‘80s and ‘90s. His writing typically involved a big family with a patriarch – which he played usually – and the conflicts around the many family members.  The audience felt that he was mirroring many scenes from their own lives but in an exaggerated style with long dialogues and emotional drama.

The skill of any writer depends on not just putting the knots together in the script but in how he/she deftly unties the knots in the end. Visu was a master in this game. And on many occasions, he mentioned that his upbringing in a joint family setup with many family members in Madras helped him conceive one line stories which were then developed into screenplays for many of his hit films.

To Visu, writing came naturally and easily. Wordplay was his forte. And thanks to his drama background, his films were dialogue- heavy. In plays, he said that he necessarily had to get the attention of even the last row in a hall and that this was possible only with stirring dialogues. Visu didn’t feel the need to change this style even in a powerful visual medium like cinema.  Who knows, probably this inflexibility curtailed his career as a director. Till Visu himself revealed this a while ago, very few knew that he was KB’s first choice to direct Rajinikanth’s super hit film – Annamalai!  But Visu didn’t do it eventually as he wanted to write the film in his style and put his stamp on the film which did not work out for the stakeholders.

At some point, Visu’s films did seem repetitive and not so realistic. But that didn’t seem to bother him so much. He felt that he must stick to his strengths which were his writing and middle-class genre. Ironically, when he tried to step out of his style and made a thriller film like Vaa Magale Vaa in 1994, it did not do well.  After a string of failures, he did very few films as a writer and director but continued acting in character roles till his health started failing him.

Visu’s migration from stage to films to then the small screen as a talk show anchor was seamless. And the main reason for that was his skill as a writer and a stage actor. So irrespective of the canvas, he was able to don the hat appropriately. But among all the hats he donned, to me, Visu the writer will remain forever.  For, he seldom directed his films but always “wrote” them.

Anand Kumar RS is a management professional by week and an avid blogger by weekend. He writes on politics, business, and films.