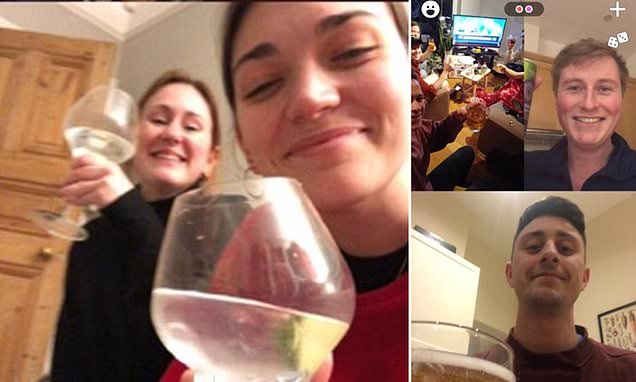 Drinkers facing pub lockdown turn to digital drinking by catching up with mates on WhatsApp, Zoom and Instagram Live for a jar and a chatBrits are mourning the closure of pubs on the first weekend of lockdownInstead, many are turning to apps to enjoy a virtual drink with their friendsApps such as Zoom and HouseParty…

Drinkers facing pub lockdown turn to digital drinking by catching up with mates on WhatsApp, Zoom and Instagram Live for a jar and a chat

By Jack Newman For Mailonline

Thirsty Brits desperate for a pint with their friends are turning to ‘digital drinking’ to keep spirits high during the coronavirus lockdown.

Boris Johnson announced the closure of pubs across the country yesterday but that has not stopped many enjoying a tipple or two from their separate houses.

Instead of meeting up and potentially spreading the virus, friends are instead enjoying virtual drinks together via their phones.

Love this. My dad and his mates having a virtual beer together over a game of dice football. Each person has a team and the games are decided by who gets the highest on two dice rolls. The hotly contested final, between Grimsby and Maldon, is just about to kick off… pic.twitter.com/RkNudlL8oy

Apps such as WhatsApp, Zoom and HouseParty allow users to hold conversations with a number of their friends at once, allowing housebound Britons to keep touch with each other during their isolation.

Ed, 25, from London, joked to MailOnline: ‘Now the pubs are closed and I can’t leave my house, how else am I supposed to drown my sorrows during this crisis.’

While Charlie, also 25 from London, said: ‘They can take away my freedom but they can never take away my beers.’

We may not be able to meet in person but we can all still drink a toast to absent Brethren. Thanks to all those who joined us for our Virtual Beers & Cheers this evening. Stay tuned for the next one🍻
•
•
•#freemasonry pic.twitter.com/YYS0M0wER7

Zoom, an app which hosts video conferencing, is now one of the most downloaded apps in the world as employees working from home and isolated friends look to connect with each other.

Many countries around the world have enforced rigid lockdowns and banned the use of pubs, clubs, cafes and restaurants in an effort to stymie the spread of the deadly covid-19.

British shoppers are also finding many alcohol aisles empty in the wake of the pub ban.

So because I couldn’t meet up with the boys for the normal Saturday lunchtime pint we decided to have a virtual drink instead, cheers pic.twitter.com/zWVDEa5Ym2

Alcohol aisles are now being stripped bare by panic buyers after Boris Johnson closed pubs and restaurants in a bid to stop the spread of coronavirus. Pictured is an empty alcohol aisle at a Tesco in Hartlepool

Boozy tipples have replaced toilet paper as the must-have product for customers who are continuing to go on frenzied shopping sprees despite warnings from the government to stop panic buying amid the Covid-19 pandemic.

The alcohol aisles in a Tesco in Hartlepool were noticeably stark this morning after the Prime Minister ordered the closure of all pubs, restaurants and cafes yesterday.

Britons woke up to a shut-down nation today after Boris Johnson ordered all pubs, restaurants, clubs, gyms and cinemas to close in a drastic ramping up of measures to stem the spread of the deadly infection, which has so far killed 233 and infected 4,145.

The alcohol aisles in a Tesco in Hartlepool were noticeably stark this morning after the Prime Minister ordered the closure of all pubs, restaurants and cafes yesterday