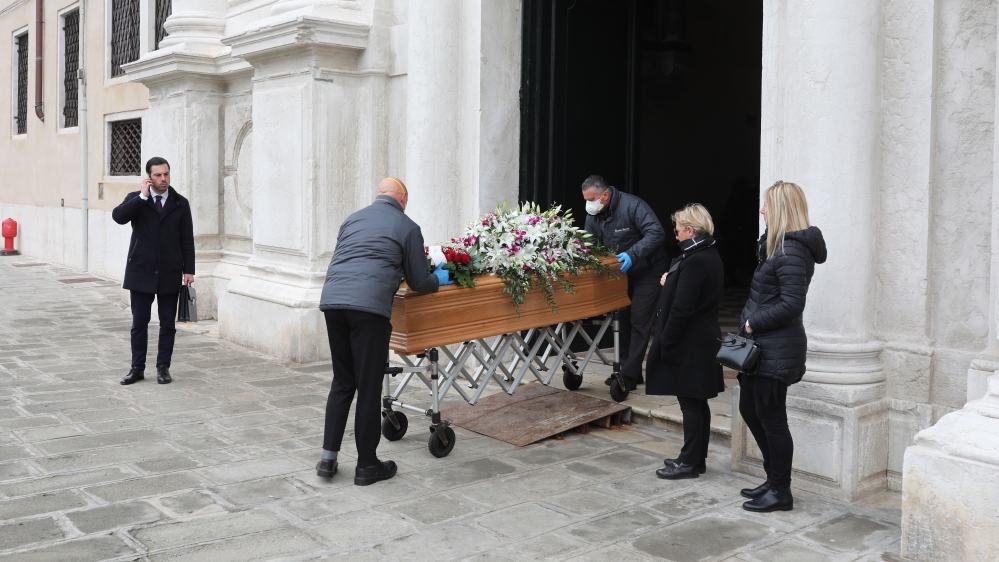 Rome, Italy - The image of Italian army trucks escorting coffins as a local crematorium was unable to cope with the number of bodies coming in shocked the citizens in Bergamo city this week. The footage, which caught international attention and was shared widely on social media, was a stark reminder of how grave the coronavirus…

Rome, Italy – The image of Italian army trucks escorting coffins as a local crematorium was unable to cope with the number of bodies coming in shocked the citizens in Bergamo city this week.

The footage, which caught international attention and was shared widely on social media, was a stark reminder of how grave the coronavirus outbreak is in the northern region of Lombardy.

“If this keeps going for six months, we will have to prepare the plot for mass graves,” Carlo Rossini, a worker at the Funeral Honours Agency La Bergamasca, told Al Jazeera.

Italy is Europe’s epicentre of the coronavirus with more than 47,000 infected, and days after the truck images were circulated, the number of deaths in the country rose further, surpassing the toll in China, where the outbreak originated.

On Friday, Italian officials said death toll rose by 627 in 24 hours, to 4,032, the largest daily jump since the virus emerged in February.

With more than 5,150 people infected, the northern province of Bergamo has become the hotbed of the virus, taking over the areas where the infection broke out in the country.

Authorities disclose only regional data, so there is no specific count on the victims in the province.

The final death toll could be higher than the official statistics.

“There are significant numbers of people who have died but whose death hasn’t been attributed to the coronavirus because they died at home or in a nursing home and so they weren’t swabbed,” Giorgio Gori, mayor of the town of Bergamo, told Reuters news agency. Italian military trucks and soldiers are seen by Bergamo’s cemetery after the army was deployed to move coffins from the cemetery to neighbouring provinces, after the cemetery was overwhelmed by the scale of the coronavirus outbreak [Sergio Agazzi/Fotogramma via Reuters]

Gori said there were 164 deaths in his city in the first 15 days of March this year, of which 31 were attributed to the coronavirus. That compares with 56 deaths over the same period last year.

In another video widely shared on social media, dozens of coffins awaiting burial are lined up along the walls of a local cemetery church.

“There are roughly 25 deceased that need [burying] and 25 whose wish was to be cremated, every day,” Giulio Dellavita, the secretary of a local diocese, told Al Jazeera. “Even with the crematorium working 24 hours, we cannot take care of more than 40 per day.”

About 30 military trucks have crossed Italy’s Bergamo, from the cemetery to the highway, with about 70 coffins of people killed by coronavirus that the cemetery can no longer manage: there are too many and will be cremated or buried elsewherehttps://t.co/OBTvmfIyuK

Rossini’s La Bergamasca agency, where he has worked for 10 years, offers funeral services in the whole province of Bergamo.

Neither he nor his elder colleagues have ever witnessed anything similar to the current pandemic.

Since the beginning of the month, Rossini has already buried 95 people. For all of them, there was no ritual whatsoever.

The lockdown enacted by the Italian government in Lombardy on March 8 banned any public solemnities.

“Funerals present the same risks as any other gatherings. I had patients who contracted the virus at a ceremony in Puglia,” Alessandro Grimaldi, head of the infectious diseases unit of L’Aquila hospital, told Al Jazeera.

When an infected patient dies in the hospital, his body is sealed directly inside the coffin, and then delivered to the graveyard.

If the family has not been quarantined, they can join a local parish priest protected with gloves and mask and recite a short prayer before the burial.

Otherwise, they must wait until the crisis is over and the lockdown lifted to say their final goodbyes.

In an overwhelmingly Catholic country like Italy, this halt represents a significant disruption in the public and personal perception of death.

“A beloved one disappears all of a sudden, and this opens a deep psychological wound,” father Giulio Dellavita said.

After relatives test positive for the coronavirus, anyone who had direct contact with them must enter a 15-day quarantine and notify local health authorities.

This means patients have no direct contact with the family. And if a patient’s condition worsens, there might be no chance of meeting them alive any more.

For those who have lost their kin, the diocese has activated a phone line.

“Imagine: you are at home with your mother, who abruptly feels sick. The ambulance comes and picks her up. From now on, you will never see and hear her again. All of a sudden, you receive the address of her tomb,” Dellavita said.

“People start wondering: what would she have thought? What should I have told her? You cannot properly digest this loss.”

Dellavita has the first-hand experience of the new way loss is being experienced.

Two weeks ago, one of his spiritual brothers fell sick. An ambulance took him to the local hospital.

Since the religious brothers all live together, Dellavita underwent a 15-day quarantine. His “sibling” died in the meantime.

“It was when I understood the pain of these families,” Dellavita said.

“We were his community. And everyone had to pray for him on his own because we cannot even gather in the house to pay tribute altogether.”

Like all the other victims, Dellavita’s brother will have his proper ceremony only after the pandemic is gone.

Cries, worships and memories will have to wait until then.