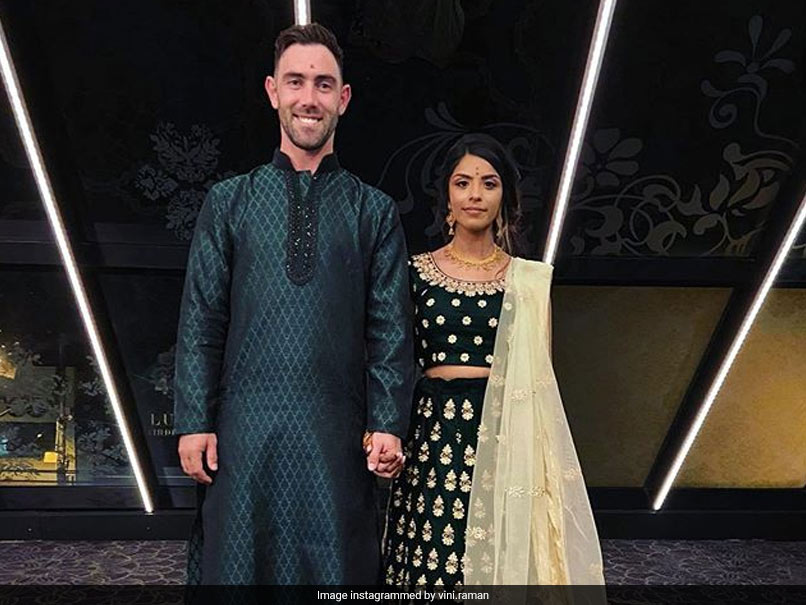 Glenn Maxwell sported a green sherwani for his engagement ceremony with Vini Raman. © Instagram Australia all-rounder Glenn Maxwell got a "teaser" of what his wedding to long-time partner Vini Raman is going to be like during their Indian-style engagement. Raman took to Instagram to share a photo from the event, where Maxwell looked dashing…

Australia all-rounder Glenn Maxwell got a “teaser” of what his wedding to long-time partner Vini Raman is going to be like during their Indian-style engagement. Raman took to Instagram to share a photo from the event, where Maxwell looked dashing in a green ‘sherwani’. The explosive batsman also sported a ’tilak’ on his forehead to complete the Indian look. “Last night we celebrated our Indian engagement and I gave @gmaxi_32 a little teaser of what the wedding will be like,” Raman captioned the picture of the two of them from their engagement.

“Shout out to both of our incredible families & all our friends who came to celebrate with us on such short notice – we are so grateful to be surrounded by some pretty amazing people,” she added in her caption.

Raman shared another set of photos from their engagement, this time with both their families.

“FAMILY,” she wrote to start her caption before thanking the photographer “for capturing these special moments.”

“Still can’t believe I’m lucky enough to have @gmaxi_32 + an amazing second family who have been so welcoming,” she wrote.

Maxwell announced his engagement to Raman in February with an Instagram picture with her and a ring emoji as the caption. Raman also took to Instagram then to post a picture with the caption “Last week my favourite person asked me to marry him #YES”.

Maxwell had credited Vini Raman for being the first to ask him to speak to someone when he had taken a mental health break from cricket in October last year.

“It was actually my partner who suggested I speak to someone, she was the first one who noticed it, so I should probably thank her as well. Once I had that initial conversation it was a big weight off my shoulders,” Maxwell had said.

The Australian credited Raman, who stood by him during his initial struggles with mental health.

“My girlfriend was probably No. 1, it wasn’t an easy job for her to deal with me going through my mood swings for the first few weeks, but Michael Lloyd was the guy I had the initial conversation with, he’s been someone who I’ve confided in since back in the academy days, so I’ve known him for well over a decade now.”