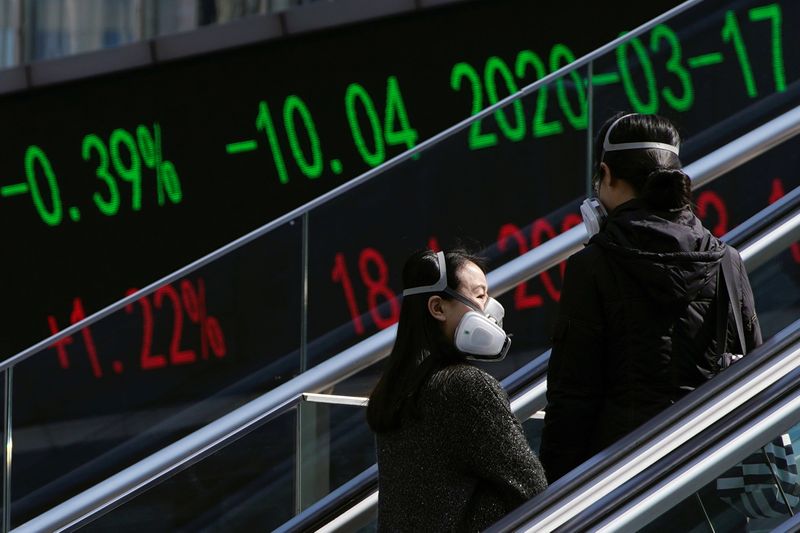 By Stanley White TOKYO (Reuters) - Asian shares fell on Tuesday in a topsy-turvy session following one of Wall Street's biggest one-day routs in history as headlines about the coronavirus outbreak and its global economic impact whiplashed investor sentiment. Financial markets cratered on Monday with the S&P 500 () tumbling 12%, its biggest drop since…

By Stanley White
TOKYO (Reuters) – Asian shares fell on Tuesday in a topsy-turvy session following one of Wall Street’s biggest one-day routs in history as headlines about the coronavirus outbreak and its global economic impact whiplashed investor sentiment.
Financial markets cratered on Monday with the S&P 500 () tumbling 12%, its biggest drop since “Black Monday” three decades ago, as a series of emergency central bank rate cuts globally only added to the recent sense of investor panic.
While some markets such as U.S. stock futures bounced in Asian trade after the major plunge, there were no convincing reasons for a sustained rally.
MSCI’s broadest index of Asia-Pacific shares outside Japan () gave up early gains to trade 0.5% lower. Japan’s Nikkei stock index () fell 0.06% and South Korea’s KOSPI () was off 2.16%. Australian shares () were up 2.73% although this followed a plunge of almost 10% on Monday.
“The move in U.S. stock futures prompted some buying of battered down sharers and lifted dollar/yen,” said Junichi Ishikawa, senior FX strategist at IG Securities in Tokyo.
“The focus is shifting to the fiscal response to the virus. We’re locked in a pattern where markets bounce and then resume falling.”
U.S. stock futures () rose by their daily limit in Asian trading, also driven in part by hopes for big U.S. fiscal spending. This lifted some Asian bourses into positive territory, but the gains did not last.
Some $2.69 trillion in market value was wiped from the S&P 500 on Monday as it suffered its third-largest daily percentage decline on record. Over the past 18 days, the benchmark index has lost $8.28 trillion.
Gold, which is normally bought as a safe-haven, extended declines on Tuesday as some investors chose to sell whatever they could to keep their money in cash.
Oil futures rebounded in Asia, but downside risks remain due to an expected slump in global energy demand and Saudi Arabia’s plans to increase crude output to expand its market share.
The U.S. Federal Reserve stunned investors with another emergency rate cut on Sunday, prompting other central banks to ease policy in the biggest coordinated response since the global financial crisis more than a decade ago.
Investors, however, are worried that central banks may have spent all their ammunition and that more draconian restrictions on personal movement are necessary to contain the global coronavirus outbreak.
Group of Seven finance ministers are likely to hold a call on Tuesday night, which has fueled speculation that a coordinated fiscal response could be in the works.
Traders are looking ahead to data due later on Tuesday, which is forecast to show German investor sentiment tumbled in March.
The United States will also release retail sales and industrial production for February, which is unlikely to reflect the impact of the coronavirus.
Some investors say markets will not settle unless the U.S. government announces a big fiscal spending package to match the Fed’s bold actions to slash rates and keep credit markets functioning.
Others say liquidity in some financial markets is starting to fall because there’s such a high degree of uncertainty, meaning even some traditional safe-havens may not be that safe.
fell 1.12% to $1,497.60 per ounce. [GOL/] In the currency market, the Swiss franc , another safe haven, weakened by 0.3% to 0.9369 per dollar as traders pondered policymakers next moves.
The dollar rose 0.7% to at 106.67 yen , recovering slightly from a 2% decline from the previous session as the Fed’s rate rippled through financial markets.
U.S. crude () ticked up 3.87% to $29.81 a barrel. Brent crude () also rose 2.53% to $30.81 per barrel, but these gains are likely to be temporary.
Saudi Aramco (SE:) reiterated on Monday plans to boost output to record levels. Top global oil producers Saudi Arabia and Russia started a price war after failing to agree on a plan to curb supply.

The coming flood of supply from Saudi Arabia and other producers could result in the largest surplus of crude in history, said global information provider HIS Markit.