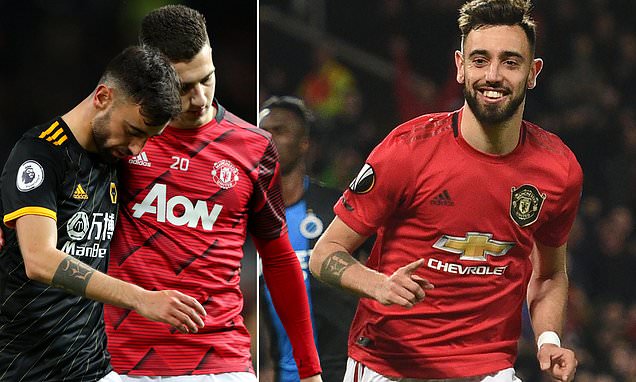 'He is going to be legend – no doubt about that': Diogo Dalot heaps huge praise on compatriot Bruno Fernandes who he believes will go on to become an all-time great at Manchester UnitedDiogo Dalot predicts Bruno Fernandes will become ‘a legend’ at Man UnitedFernandes has been an instant hit since joining from Sporting Lisbon…

‘He is going to be legend – no doubt about that’: Diogo Dalot heaps huge praise on compatriot Bruno Fernandes who he believes will go on to become an all-time great at Manchester United

By Chris Wheeler for MailOnline

Diogo Dalot has predicted that his Portuguese compatriot Bruno Fernandes will become ‘a legend’ at Manchester United.

Fernandes has been an instant hit since joining United from Sporting Lisbon in a deal worth up to £68million in January, helping Ole Gunnar Solskjaer’s team go on an 11-game unbeaten run.

The 25-year-old playmaker has contributed three goals and four assists, and was rewarded on Monday when he was named Premier League player of the month for February – only the fourth United player to win the award since Sir Alex Ferguson retired in 2013.

Dalot has become close friends with his countryman in England, and believes Fernandes will gain iconic status at United.

‘He’s a top guy, a top player. He is going to be legend,’ said the United defender. ‘He’s unbelievable, he can better of course as well. He’s going to learn a lot from this club.

‘I think he is a massive player to have in this team and he’s going to be a very good player for this club. He’s going to be (a legend), no doubt about that.

‘He was the captain at Sporting, of course he’s an experienced player as well. He’s 25 and has played in Italy and Portugal as well. He knows what he is doing. It’s going to be very good for him.’

Speaking to The Official Manchester United Podcast, Dalot also recalled his own move to United – a £19million transfer from FC Porto in 2018 – and how he used his first month’s wages to buy his old youth team Escola de Futebol O Fintas a minibus.

‘It was one of the first things I thought to do when I came here because when I moved to Porto they (Fintas) didn’t win (earn) nothing – Porto didn’t pay them. Porto gave them six Nike balls. It was the first Nike balls the club had.

‘Because it was a very long period (since leaving Fintas), they didn’t win nothing from my move to United. That’s why I took my first salary to buy a van for them so they can travel with the kit, travel from home, take them to training as well.

You can listen to the rest of the interview from Monday evening, as well as previous UTD Podcast episodes, via the Manchester United website, App and all your favourite podcast platforms.