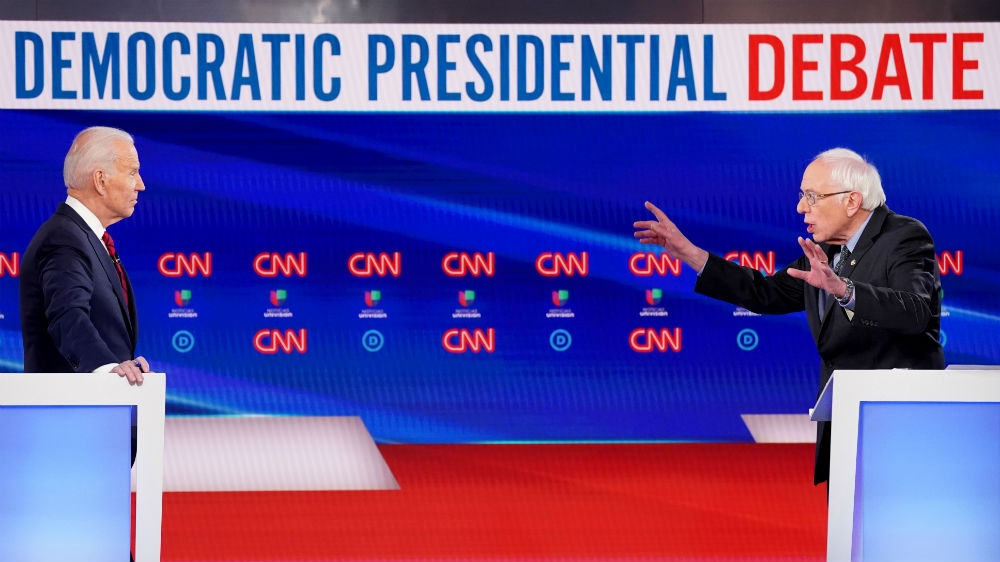 United States Democratic presidential hopefuls Joe Biden and Bernie Sanders tore into President Donald Trump's handling of the coronavirus outbreak during a Democratic debate on Sunday, offering competing visions of leadership during a widening crisis that has upended the daily lives of Americans. In their first one-on-one debate, the last two Democratic contenders in the…

United States Democratic presidential hopefuls Joe Biden and Bernie Sanders tore into President Donald Trump’s handling of the coronavirus outbreak during a Democratic debate on Sunday, offering competing visions of leadership during a widening crisis that has upended the daily lives of Americans.

In their first one-on-one debate, the last two Democratic contenders in the race to face Trump in the November election clashed on the proper approach to the pandemic and other pressing issues, with former Vice President Biden arguing his approach to leadership would get quick results and Vermont Senator Sanders pushing for bigger, more fundamental changes.

Both candidates assailed Trump for his handling of the coronavirus outbreak, saying he had contributed to growing worries by spending weeks minimising the threat before declaring a national emergency on Friday.

The debate, originally scheduled for Phoenix, took place in a Washington studio with no audience, a move made to limit possible exposure to the virus – a sign of how deeply the campaign routine has been reshaped by the global pandemic.

When the two men took the stage, they smiled and shared an elbow bump – abiding by the advice of public health officials to avoid handshakes.

Biden, the frontrunner, recounted his experience as serving in President Barack Obama’s administration in dealing with the Ebola outbreak in 2014. He laid out a coronavirus plan to make testing free and widely available, establish mobile sites and drive-through facilities in each state and provide more help for small businesses hurt by the resulting economic slowdown.

He said he was willing to call out the military to help local officials build hospitals and take other necessary relief steps.

“This is like a war, and in a war, you do whatever needs to be done to take care of your people,” Biden said.

Sanders suggested the first step in responding to the outbreak would be “to shut this president up right now” because he was undermining the response of public health officials.

“We have got to learn that you cannot lie to the American people. You cannot be less than frank about the nature of the crisis,” Sanders said, adding the crisis showed the need for his signature Medicare for All healthcare proposal, which would replace private health insurance with a government-run system.

“Let’s be honest and understand that this coronavirus pandemic exposes the incredible weakness and dysfunctionality of our current healthcare system,” he said.

Biden has opposed the Medicare for All plan, saying it is too costly and he prefers to build on the Affordable Care Act, known as Obamacare, by adding a public option for those who want it.

“That has nothing to do with the legitimate concern about income inequality in America. That’s real. But that does not affect the need for us to act swiftly and very thoroughly and in concert with all the forces we need to bring to bear,” he said.

Biden, 77, and Sanders, 78, have been forced to cancel public events and step off the campaign trail during the crisis. They said they were taking personal steps to stay healthy – avoiding crowds, washing hands and having their campaign staff work from home.

Biden promised for the first time during the debate to pick a woman as his running mate if he became the Democratic nominee.

“If I’m elected president, my cabinet, my administration, will look like the country, and I commit that I will, in fact, appoint and pick a woman as vice president,” Biden said.

Sanders was less willing to commit to picking a woman, saying that “in all likelihood” he would.

The debate came two days before Tuesday’s nominating contests in the big states of Ohio, Illinois, Florida and Arizona, where another string of Biden victories would give him a nearly unassailable lead in delegates over Sanders.

But hopes the debate would be a first step towards party unity before the November 3 election against Trump seemed to fade during the showdown, as the two candidates bickered repeatedly over their approach to leadership.

“People are looking for results, not a revolution,” Biden said, taking a shot at Sanders’ promises to lead a political revolution.

Sanders, a democratic socialist, said his long-standing support for sweeping economic and social reforms was actually proof of his ability to lead and contrasted it with what he said was Biden’s sometimes shifting views.

“I don’t have to rethink my position,” Sanders said. “That’s what leadership is.”

Both candidates promised to support the eventual nominee, and in a bitter exchange repeated criticism that has come up on the campaign trail before, with Sanders saying Biden was beholden to special interests and Biden accusing Sanders of being too supportive of the gun industry.

Earlier in the day, Biden’s campaign courted the progressive supporters of Sanders and Senator Elizabeth Warren of Massachusetts, who dropped her White House bid earlier this month but has not endorsed anyone, by promising to back a Sanders plan to make public colleges tuition-free to families with incomes of less than $125,000 a year.