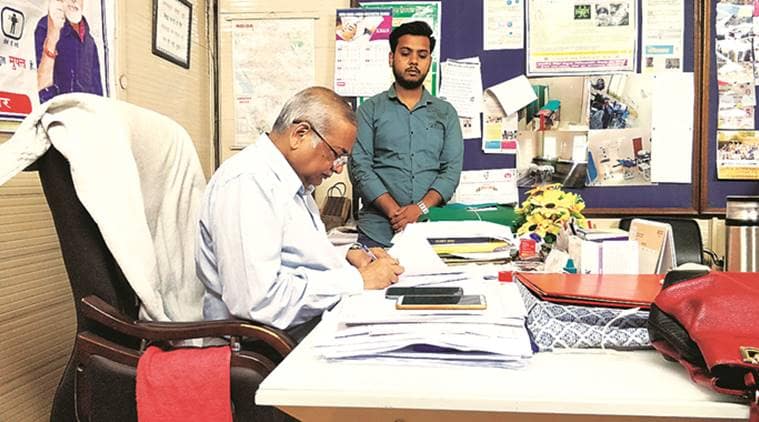 The scene that unfolded in the room of the Chief Medical Officer (CMO) of Uttar Pradesh’s Gautam Buddha Nagar district on Friday afternoon would have spooked almost anyone. Except perhaps, CMO Anurag Bhargava himself.

A worried young man approached the 59-year-old chief who was fielding endless phone calls from citizens at his desk. The man’s sister stood in a corner at the other end of the room, coughing into a thin disposable mask that did not cover her nose.

“Right now, those coming in from outside the country are at the greatest risk. Has she travelled abroad lately?” Dr Bhargava asked the man.

“Okay, then here is what you have to do,” the CMO said, noting down the contact details of the suspected patient while directing the man and the woman to the designated hospital to give samples.

As the woman turned to leave, Bhargava stopped her. “Please make sure you wear that mask properly. You can’t have it not covering your nose like that,” he said with the calm sternness of a man who understands exactly how — and why — the situation could take a potentially devastating turn.

Over the last three months, COVID-19, the illness caused by the novel coronavirus SARS-CoV-2, has taken over the lives of the CMO and his staff. Bhargava’s deputy, Sunil Dohre, has been making repeated rounds of the designated hospitals in the district, ensuring they are prepped for every eventuality. Bhargava’s epidemiologist, Vartika Gupta, has been meticulously maintaining a list of all persons under surveillance for potential cases.

Bhargava himself is either in endless meetings with his staff, assuaging fears of those calling him about the virus, or guiding associations on how to scrub their offices clean to avoid a potential outbreak.

How many hours in a day does he work?

“Twenty four-seven,” an office staffer replied on behalf of the CMO. “He is the most accessible CMO we have ever seen.”

Dr Bhargava’s wife, Richa, said he has always been “completely involved” in every assignment he has taken up, and that she expected nothing less from him now.

“Of course, I’m concerned too, but I understand that this is his job and, for him, his work has always come first.” She does try to ensure he takes as many precautions as possible though, she said. “I keep telling him every day to make sure he has his sanitiser, to wear his mask. I don’t know if he listens, but I do nag him every day.”

Dr Anurag Bhargava, Chief Medical Officer of Gautam Buddha Nagar, himself is either in endless meetings with his staff, assuaging fears of those calling him about the virus, or guiding associations on how to scrub their offices clean to avoid a potential outbreak. (Express Photo: Prabha Raghavan)

Since February 1, Bhargava’s team has directed the testing of 158 samples for COVID-19. The rapid response team has been virtually camping at the CMO’s office near Noida’s City Centre Metro station, making endless follow-up phone calls to find people who may have come in contact with confirmed cases of the disease.

People like Bhargava and his team are critical to India’s fight against COVID-19. Their job is to stop those who have contracted the virus on trips abroad from spreading it in the community here — and to keep a hawk eye on potential cases to contain them in time. They are the second line of defence after airport authorities, as they try to prevent the situation in the country from escalating to the next stage of the disease’s transmission.

On Friday afternoon, a team of 12 was sitting at the CMO’s office with a list of 707 employees of a Noida-based leather unit, making surveillance calls. An employee at the unit with a history of international travel had tested positive on Wednesday, and the team had been at the exercise since the list was given to them on Thursday morning.

Some in the track-and-trace group, which had been expanded from the six-strong earlier, had showed up an hour before their shift was to start, seeking to reach as many of these people as possible, as quickly as possible. “Do these persons have a fever? Do they have a cough?” the unit tries to find out during the calls they make.

By the afternoon, around 500 persons had been contacted — and things seemed under control. “It is important to make sure that we are ahead of the curve,” said one of the employees at the CMO’s office, requesting not to be named.

This exercise will be repeated every day for 28 days to make sure every person is followed up rigorously in order to catch any potential new cases in time. Each day, a new person makes the follow-up call to ensure that the details match, Dr Bhargava said.

Some in the track-and-trace group, which had been expanded from the six-strong earlier, had showed up an hour before their shift was to start, seeking to reach as many of these people as possible, as quickly as possible. (Express Photo: Amit Mehra)

“We give the people we call all the details that they need. We also instruct them on the directions that have been given (to the hospital) for the testing,” said one of the callers, who too, requested anonymity.

What if the person on the list does not respond to the calls?

After the caller has tried a few times, some members of the unit show up at the address on their list. Since the beginning of the year, the CMO’s department has tracked over 100 such people in person, Bhargava said.

Explained: Here is how scientists are finding a cure for coronavirus

“They follow protective measures, wear masks, keep a distance of 2 metres, and do not enter the houses of these people,” he said. The staff in his office have been trained to maintain hygienic practices at all times — employees are seen wearing masks and frequently washing their hands.

Those in the COVID-19 tracking unit primarily work in other teams like ‘Malaria’, ‘Leprosy’, the ‘Integrated Disease Surveillance Programme’ and ‘Rashtriya Bal Swasthya Karyakram’. They are referred to as such when summoned to Bhargava’s office from time to time for updates.

“Right now, it doesn’t matter what department they work in. Everyone is in the coronavirus team,” Dr Bhargava said.

For all the latest India News, download Indian Express App.