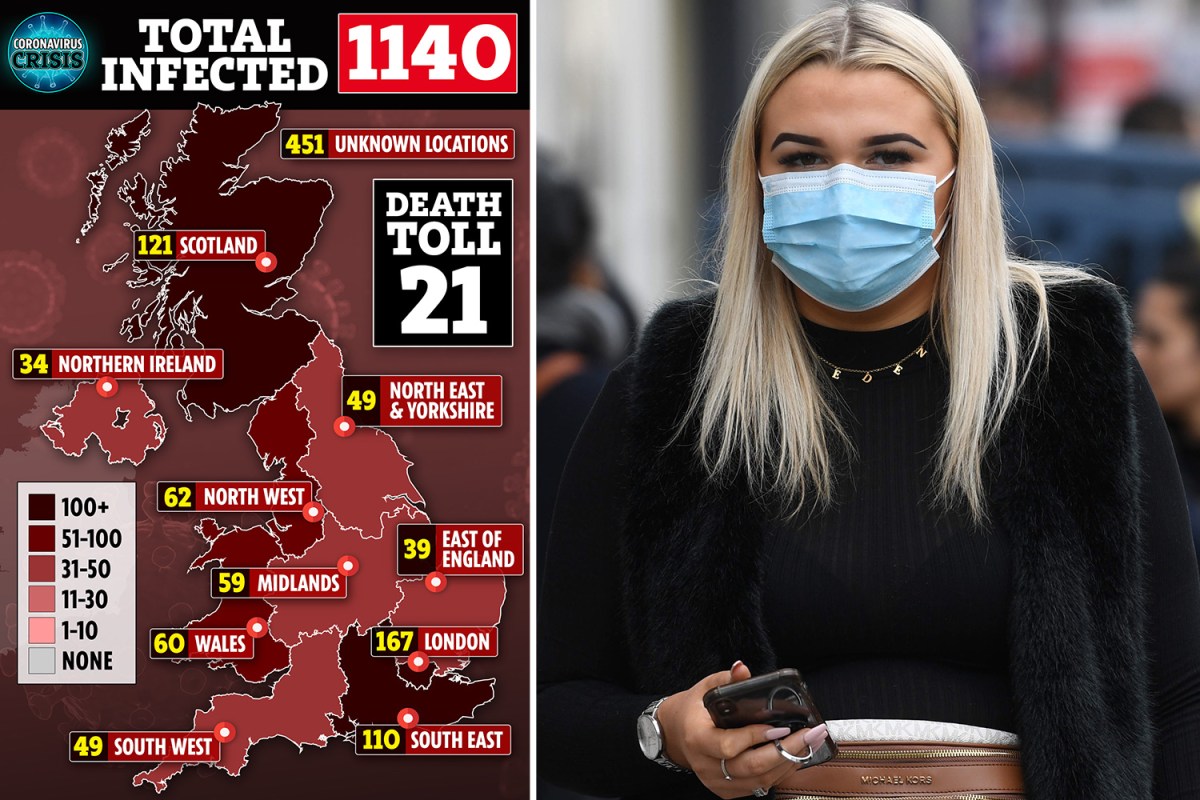 THE UK's coronavirus death toll today almost doubled from 11 to 21 as cases rocketed from 820 to 1,140 in just 24 hours. Ten patients who tested positive for the deadly bug died overnight - the largest number of deaths announced on a single day after the death toll hit 11 yesterday. ⚠️ Read our coronavirus…

Ten patients who tested positive for the deadly bug died overnight – the largest number of deaths announced on a single day after the death toll hit 11 yesterday.

Tap to see where COVID-19 is near you

Public Health England today confirmed 1,140 coronavirus cases in the UK – a 40 per cent spike in 24 hours from yesterday’s 798 cases and marking the biggest daily leap yet.

It comes as Prime Minister Boris Johnson this week came under fire after announcing only the most seriously ill will be tested for coronavirus, while others exhibiting symptoms were told to self-isolate to develop “herd immunity”.

But in a thinly-veiled swipe, WHO’s director general, Dr Tedros Adhanom Ghebreyesus, warned every case needed to be tested and treated – adding “do not just let this fire burn”.

He said: “I am sorry to confirm 10 further patients who have tested positive for Covid-19 in England have died.

“All 10 individuals were in the at risk groups. I understand this increase in the number of deaths linked to Covid-19 will be a cause for concern for many.

“The public should know every measure we are taking is seeking to save lives and protect the most vulnerable.”

The first person in the UK to die after being diagnosed with coronavirus was announced on March 5, and Saturday’s announcement of 10 deaths is by far the largest number of deaths announced on a single day in the UK since the outbreak took hold.

It is understood the latest victims were being cared for by nine trusts including Buckinghamshire, Sandwell & West Birmingham, Wolverhampton, Leicester, Barts, London, north Middlesex and Chester.

They include five men in their 80s who were being cared for across City Hospital in Birmingham, New Cross Hospital in Wolverhampton, Leicester Royal Infirmary, North Middlesex University Hospital and The Countess of Chester Hospital.

Another man in his 60s at Northwick Park Hospital in North London also passed away, while a man in his 70s at Wycombe Hospital died.

A patient in his 90s at St George’s Hospital in London and two patients at Barts Health NHS Trust also died after testing positive.

The UK is now in the delay phase, with social restriction measures to be introduced to try and slow the rate of spread.

In the UK, Boris Johnson will next week ban all mass gatherings in a bid to fight coronavirus.

The PM decided on the move after a host of cancellations — from the London marathon to the Premier League, sources said.

It comes as it was revealed a newborn baby in London had become one of the youngest in the world to test positive for the virus.

The fallout over coronavirus today saw Jet2 cancel all of its flights to Spain after the country declared a state of emergency.

WHO’s director general, Dr Ghebreyesus, warned: “You can’t fight a virus if you don’t know where it is.

“Find, isolate, test and treat every case to break the chains of Covid transmission. Every case we find and treat limits the expansion of the disease.

“Do not just let this fire burn. Any country that looks at the experience of other countries with large epidemics and thinks ‘that won’t happen to us’ is making a deadly mistake.”

The virus’  infection rates has also seen Brits take to the shops and panic buy, with supermarkets forced to implement restrictions on long life milk and dry pasta.

Streets in the capital – usually bustling with tourists – have also been pictured empty at times as people avoid public areas amid the chaos.

Europe became the new coronavirus epicentre this week as the number of deaths globally surpassed 5,000.

Sir Patrick said if 60 per cent of healthy Brits catch coronavirus, it will help protect the most vulnerable by creating “herd immunity”.

He believes it would stop it spreading among the rest of the population.

The contagion would otherwise return next winter, when the NHS is ill-equipped to cope.

He added: “Our aim is to try and reduce the peak, broaden the peak, not suppress it completely.”

Meanwhile in the US, Donald Trump has launched coronavirus testing centres at local supermarkets and car parks.

Care homes now have orders that any resident with a cough or fever must be immediately isolated — and cared for by staff in protective masks and gloves.

Sick people will be banned from visiting. But some families fear loved ones would die alone.

Several providers have already started telling families to stay away.