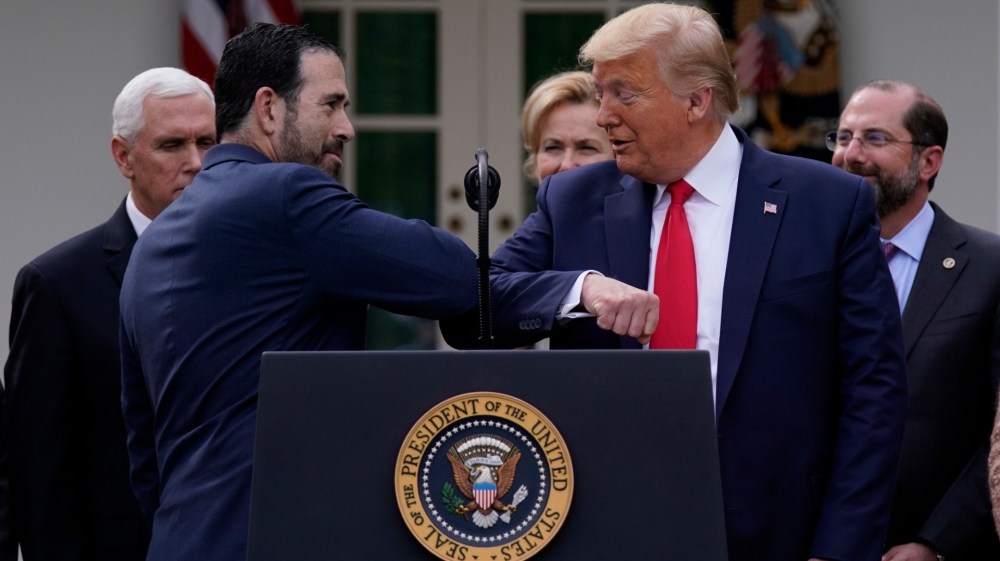 The coronavirus outbreak has swept the globe and been declared a pandemic, but experts warn the response of some world leaders, including the administration of US President Donald Trump, has been anything but global.  With more than 140,000 people in some 120 countries infected in the outbreak of the new coronavirus disease, officially known as COVID-19, the…

The coronavirus outbreak has swept the globe and been declared a pandemic, but experts warn the response of some world leaders, including the administration of US President Donald Trump, has been anything but global.

With more than 140,000 people in some 120 countries infected in the outbreak of the new coronavirus disease, officially known as COVID-19, the World Health Organization (WHO) has stressed that international cooperation is needed to contain the rapidly spreading virus.

But in recent days, both China, where the virus was first detected late last year, and the United States, which on Friday declared a national emergency, have shown nationalist tendencies in their political response.

In the US, Trump’s approach to the virus has appeared more concerned with a political narrative than the public health threat, critics say, with some calling the president’s declaration of a national emergency too little, too late.

“What we’re seeing is kind of fragmentation and politicisation along nationalist lines as the pandemic spreads and globalises,” Stephen Morrison, senior vice president of the Center for Strategic and International Studies and director of its Global Health Policy Center, told Al Jazeera.

In the Trump administration’s portrayal of the outbreak, he said, there has been a “nationalistic, neo-isolationist perspective of trying to pin the blame on the Chinese, pin the blame on the Europeans and trying to minimise or downplay the fact that wherever the virus originated, it’s among all of us, it’s inside of our borders”.

On Wednesday, the White House national security adviser, Robert O’Brien, accused China of “covering up” the virus when it first appeared. Meanwhile, Trump administration officials including Secretary of State Mike Pompeo in recent days have taken to calling the coronavirus the “Wuhan virus”, ignoring WHO’s guidelines and inciting rebuke from Beijing.

At the same time, with the number of cases falling in China and soaring abroad, Beijing has started to reject the generally-accepted assessment that the virus originated in Wuhan, the capital of the central Hubei province and the outbreak’s hardest-hit city.

On Thursday, foreign ministry spokesman Zhao Lijian said on Twitter that “it might be US army who brought the epidemic to Wuhan”, perpetuating a conspiracy theory that has been circulating online, without providing any evidence.

In Europe, the current epicentre of the pandemic according to WHO, European Union leaders condemned a travel ban announced by Trump on Thursday, which excluded the United Kingdom despite the country having a comparable amount of cases to many states in the bloc.

Trump said that decision was because of the UK’s “very strong borders” and not the two governments’ close ties in the wake of Britain’s departure from the EU.

“It’s not a very promising environment for getting high-level political leadership organised around how they’re going to deal with this as as a global community,” Morrison said. “If we are fragmenting along strategic rivalries and nationalist tendencies, and denialism, that’s moving in the opposite direction than what we should be moving towards – how are we going to figure out a way forward that bridges these divisions and emphasises the shared common good?”

Echoing that thought, Leana Wen, a physician and professor of public health at George Washington University, told Al Jazeera that leaders must heed the urging of the WHO to cooperate in overcoming the pandemic.

Coronavirus, politics and the US

A presidential response to the coronavirus that initially appeared to focus on downplaying the threat has also had implications for the outbreak in the US, according to experts.

In a March 7 op-ed in the New York Times, Jeremy Konyndyk, a senior policy fellow at the Center for Global Development, said that initially, “federal officials responded in a way that suited the narrative Mr Trump preferred”.

“It’s no coincidence that the coronavirus has broken out across the country as the president has continued to brag about keeping the disease outside America’s border,” he wrote. “Pretending we could wall out the virus not only gave the public a false sense of security, it also left the United States unready for the threat it now faces.”

Others have criticised what at times appeared to be a greater focus on the economy over the global health risk. Trump compared the coronavirus, which has no vaccine or known treatment regiment, to the flu as markets tanked on March 9, appearing to insinuate the current situation was overblown.

Experts derided the comparison as misleading and inappropriate.

Since the first US case was reported in Washington state on January 21, the number of infections has ballooned to more than 1,200 in 46 states with at least 36 deaths.

‘Most profound crisis that Americans have faced’

On Friday, Trump also pledged up to $50bn for state and local governments to respond to the outbreak, waiving interest on federally held student loans, and giving Secretary of Health and Human Services Alex Azar the authority to waive federal regulations and laws to give doctors and hospitals “flexibility” in treating patients.

However, the urgent tone was much delayed and Trump appeared to have missed the gravity of the moment early on in the outbreak, according to Aaron David Miller, a senior fellow at the Carnegie Endowment for International Peace.

“This is the most profound crisis that Americans have faced in terms of how it impacts their daily lives,” Miller, author of the End of Greatness: Why America Can’t Have (and Doesn’t Want) Another Great President, told Al Jazeera. “And as you can see from the profound changes that have occurred, which, in my lifetime, I’ve never experienced – this goes beyond 9/11, goes beyond the Cuban Missile Crisis in terms of its longevity, its capacity to endure, and the threat that it poses every single day to everybody.”

Trump, however, “failed in responsibility number one” which is “levelling with the American public about the nature and the severity of this crisis”.

US testing has also lagged behind other countries. Public health officials have attributed the slow response to a combination of factors, including the disbanding of the White House’s National Security Council Directorate for Global Health Security and Biodefense in 2018 and the failure to heed the Director of National Intelligence’s January 2019 warning of the country’s vulnerability to a viral outbreak.

“I don’t take responsibility at all,” Trump said at a news conference on Friday, when asked about the slow testing, which he vowed had since been resolved.