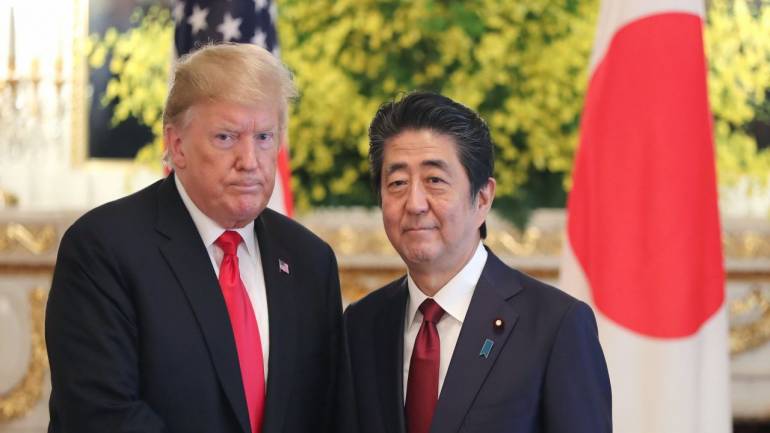 Top Japanese government officials said Friday they were determined to hold "safe and secure" Olympics on schedule, a day after US President Donald Trump said Tokyo should consider delaying them for a year because of the pandemic.Japan's Nikkei stock market benchmark tanked 10% as panic gripped financial markets, and the economy minister said the government…

Top Japanese government officials said Friday they were determined to hold “safe and secure” Olympics on schedule, a day after US President Donald Trump said Tokyo should consider delaying them for a year because of the pandemic.

Japan’s Nikkei stock market benchmark tanked 10% as panic gripped financial markets, and the economy minister said the government “must take bold and unprecedented steps” to lessen the blow to households and companies from the health crisis.

Prime Minister Shinzo Abe and Trump talked by phone for about 50 minutes Friday morning and agreed to “strengthen cooperation” on fighting the novel coronavirus, but did not discuss postponing the Olympics or holding them without spectators, Japanese officials said.

Trump said in a tweet on Friday that he told Abe “that the just completed Olympic venue is magnificent. He has done an incredible job, one that will make him very proud. Good things will happen for Japan and their great Prime Minister. Lots of options!”

On Thursday, Trump told reporters in the White House that he “just can’t see having no people there,” referring to the Tokyo Games.

“Maybe they postpone it for a year… if that’s possible,” he said. Trump added that he liked “that better than I like having empty stadiums all over the place. I think if you cancel it, make it a year later that’s a better alternative than doing it with no crowd.”

In response, Japan Olympic minister Seiko Hashimoto told reporters, “the IOC and 2020 organisers are not at all considering cancelling or postponing the Games. I’ve heard they are proceeding with preparations for safe and secure Games as planned toward the opening day of July 24.”

The IOC stands for the International Olympic Committee.

There were 1,334 confirmed infections in Japan, including 696 from a cruise ship that was docked in the port city of Yokohama for several weeks, according to public broadcaster NHK. The virus killed 22 in the country, including 7 from the ship, the tally showed.

Japan has sought to quash speculation that the Games, which have cost it at least $12 billion in preparations and attracted more than $3 billion in domestic sponsorships, could be cancelled or postponed as the number of people infected has reached 127,000 worldwide.

The outbreak has already crippled global travel and hit Olympic qualifiers and other sports events. Japan has shuttered schools. Public health officials have discouraged large gatherings to curtail the spread of the highly contagious disease, and major soccer tournaments, National Basketball Association games and other sports have been halted.

The Tokyo 2020 organising committee said it was monitoring the pandemic with the IOC, receiving advice from the World Health Organization, and coordinating with the government and the Tokyo authorities.

Japan’s government and the central bank shared a “strong sense of concern” over the economic fallout from the coronavirus, economy minister Yasutoshi Nishimura said, suggesting major fiscal and monetary stimulus measures could be in the works.

One of the more than two dozen members of the board of the organising committee, Haruyuki Takahashi, told Reuters this week that if the Games could not be held in the summer, it would be most feasible to delay them by a year or two. He told other media the decision should be made before May.

Takahashi also told Reuters organisers had started working on scenarios for how the virus could affect the Games. A sponsor representative said the plans were confidential and were not being shared with the companies.

Tokyo 2020 chief Yoshiro Mori vehemently denied the Games would be cancelled, but added at news conference in the wake of Takahashi’s comments, “I am not saying there won’t be any impact. I think there will be. On that, specialists in each field are looking into what to do.”On Thursday, the prelude to the games got underway with the lighting of the Olympic Torch in a scaled-down ceremony behind closed doors.

Time to show-off your poker skills and win Rs.25 lakhs with no investment. Register Now!