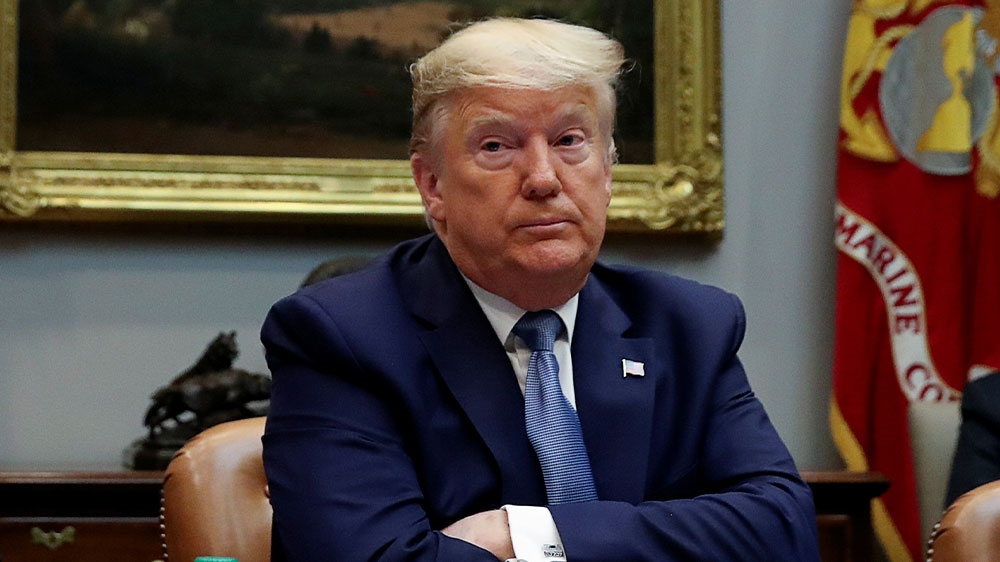 Washington, DC - The United States House of Representatives approved on Wednesday a War Powers Resolution aimed at limiting President Donald Trump's ability to wage war against Iran. The passage of the resolution was yet another rebuke of the president over his decision to order the killing of Iranian General Qassem Soleimani in January amid…

The passage of the resolution was yet another rebuke of the president over his decision to order the killing of Iranian General Qassem Soleimani in January amid escalating tensions with Tehran.

The Senate voted 55 to 45 – with eight Republicans joining Democrats on February 13 – to approve the resolution. The House action sends the measure to Trump, who has threatened to veto it. A two-thirds vote in both the House and Senate would be needed to override a veto.

The measure requires that Trump get congressional approval before engaging in further military action against Iran.

“Congress should vote on articles of war before any further hostilities with Iran,” Democratic Representative James McGovern said in House floor debate.

Trump ordered the attack that killed Soleimani, the head of Iran’s elite Quds Force, at the airport in Baghdad on January 3. Conflict with Iran swiftly escalated into a standoff that many members of the US Congress feared would lead to outright war.

Iran responded to Soleimani’s killing with attacks on two Iraqi bases housing US troops. More than 100 US troops were diagnosed with traumatic brain injuries.

Under the War Powers Act of 1973, the resolution directs the removal of US forces from hostilities against Iran that have not been authorised by Congress.

The resolution “fails to account for present reality,” the White House said in a statement on Tuesday.

“It was drafted many weeks ago with the intent of preventing an escalation between the United States and Iran,” the White House added.

“Despite the predictions of many people, however, no such escalation occurred,” the White House said. “The United States is not currently engaged in any use of force against Iran, in part because of the sound policies and decisive, effective actions of this administration.”

Tensions with Iran have escalated since Trump unilaterally pulled the US out of the 2015 nuclear agreement with Iran in May 2018. Since then, Trump has exerted a “maximum pressure” campaign against Iran, including economic sanctions, diplomatic isolation and military threats.

“It is that regime that President Trump said so clearly that Iran will never obtain a nuclear weapon while we’re on watch,” US Secretary of State Mike Pompeo told the annual conference of the American Israel Public Affairs Committee last week.

Anti-war sentiment has been rising in Congress as US troops remain mired in conflicts in Afghanistan, Iraq and Syria.

Trump has repeatedly said he wants to end “America’s wars in the Middle East” and has sought to foster peace talks between the Taliban and the US-backed government in Afghanistan. But Trump administration officials have offered shifting justifications for the drone strike that killed Soleimani and three others in a car at the Baghdad airport. They initially said Soleimani was planning imminent attacks on US troops and sites, but have only offered vague details. Later, a legally-mandated White House report to Congress did not cite an imminent threat.

The US air attack on Soleimani on Iraqi soil sparked public demands in Iraq for US troops to leave. US officials so far have declined to react to those calls.

Wednesday’s vote is the latest in a series of actions by Congress that signal Trump does not have support for a potential conflict with Iran.

The Democratic-led US House of Representatives previously voted on January 30 to approve two measures aimed at constraining Trump’s ability to direct military action in the Middle East.

A bill that would block funding for any use of offensive force against Iran passed by a 228-175 vote. A second measure, repealing Congress’s 2002 authorisation of the US invasion of Iraq, passed 236-166. The House also voted 224-194 on January 9 to rebuke Trump for the killing of Soleimani.