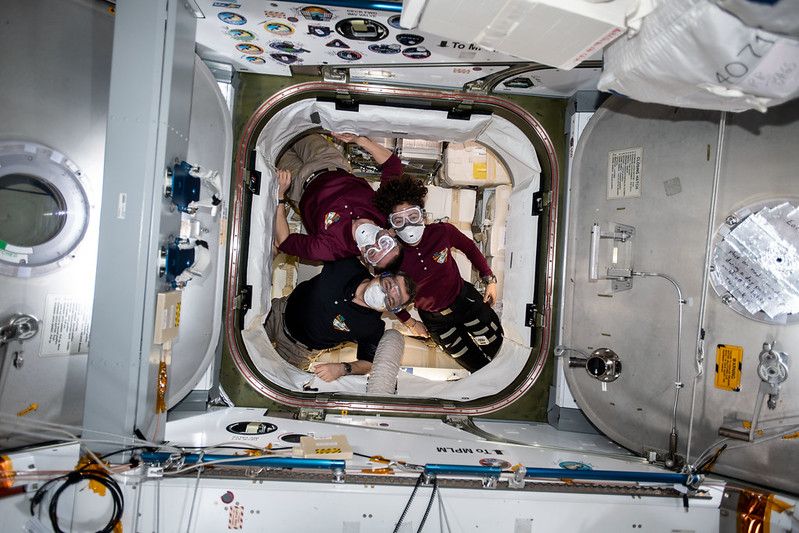 Home News Spaceflight Expedition 62 astronauts pose for a photo while inside a visiting SpaceX Dragon CRS-20 resupply craft at the International Space Station. The masks they're wearing are to protect against particles and irritants that could have come loose inside the Dragon during its flight. (Image: © NASA) As coronavirus continues to spread around… 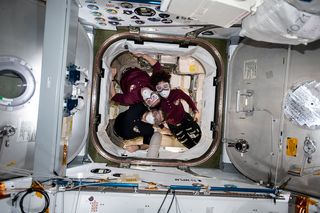 Expedition 62 astronauts pose for a photo while inside a visiting SpaceX Dragon CRS-20 resupply craft at the International Space Station. The masks they’re wearing are to protect against particles and irritants that could have come loose inside the Dragon during its flight.

As coronavirus continues to spread around the globe, it’s interesting to ponder what would happen if such a virus were to spread in space.

On rare occasions throughout spaceflight history, astronauts have fallen ill while in space. While floating off-Earth, astronauts have endured upper respiratory infections (URI) or colds, urinary tract infections and skin infections, Jonathan Clark, a former (six-time) crew surgeon for NASA’s Space Shuttle program and current associate professor of neurology and space medicine at the Center for Space Medicine at the Baylor College Of Medicine, told Space.com.

During Apollo 7 in 1968, the crew got colds in space and, according to Clark, “it had a significant impact.” Cmdr. Wally Schirra most likely came aboard with a mild cold and spread it to the other crew members. The astronauts ran out of medication and tissues and refused to wear their helmets while reentering Earth’s atmosphere, Clark said.

Similar difficulties befell astronauts on Apollo 8 and Apollo 9, who also experienced colds. Following these missions, NASA implemented a pre-flight quarantine that called for limited, monitored contact with other humans to try to ensure the crew’s health and safety.

Related: Coronavirus in the U.S.; Map, case counts and news
More: NASA monitors coronavirus for impacts to US space program

But how have things changed since the early days of spaceflight and these early cases of space illness. Is it possible that astronauts might one day have to combat more serious illnesses in potentially more difficult off-Earth environments?

How illness works differently in space

With regard to medical emergencies, astronauts have so far been able to remotely access medical assistance from space thanks to increasing capabilities in Earth-space communications. In fact, medical experts on Earth were even once able to help an astronaut who suffered a blood clot while aboard the space station.

Related: What emergency medicine will look like for astronauts in space

However, the ways that infections spread and how viruses and illnesses behave in the body changes when humans go to space. From the physical stresses that come with launching off-Earth to living in a confined environment without Earth’s gravity, even “regular” illnesses like colds can look much different for astronauts.

Spaceflight changes the body in a number of strange ways that scientists are still working to fully understand. Most obviously, the physically extreme act of launching off-Earth in a rocket can cause motion sickness and can affect spatial orientation and coordination. Once in space, changes in stress hormone levels and other physical repercussions of spaceflight cause your immune system to change. While an astronaut might be used to having a “good immune system” on Earth, they could be more susceptible to illness or even allergic reactions while in space.

As Clark explained, viruses like the flu or even coronavirus could also be more easily transmitted in a microgravity environment, such as on the International Space Station. “The absence of gravity precludes particles settling down, so they stay suspended in the air, and could be more easily transmitted. To prevent this, compartments are ventilated and the air HEPA filters would remove particles.”

Additionally, scientists have found that dormant viruses react to the stresses of spaceflight, and viruses such as herpes simplex have been known to reactivate, or “awaken,” during spaceflight. Also, as Clark said, on-going studies have shown that it’s possible that enhanced bacterial virulence in space could make antibiotic treatments less effective.

“There are antiviral medications that could be used to prevent viral spread, much as has been considered for the terrestrial viral epidemics. Also, for planetary missions the crew would be isolated upon return to Earth, just like they were done in the early missions returning from the moon,” Clark said.

What would astronauts do?

Whether in the confined space aboard the space station or within future lunar or Martian habitats, the spread of disease would pose very real threats to future astronauts, as it has for astronauts of previous generations.

So, as we scramble here on Earth trying to figure out how to best stop the spread of the coronavirus disease known as COVID-19, what would astronauts do off-Earth? As mentioned, we know that it’s possible that such viruses would spread more easily in space and that treatments might work differently. And while there would be additional challenges in quarantining a sick astronaut off-Earth, Clark suggests that it would likely be one of the procedures followed.

“It’s hard to implement quarantine in small spaces,” Clark said, “but a crewmember with an URI would be isolated in their sleep quarter while symptomatic, and wear a mask for containment, have cultures done to identify the organism for appropriate treatment.”

He added that if astronauts were to be quarantined aboard the space station, the “U.S. segment of the ISS has HEPA [high-efficiency particulate air] air filters and regular wipe-down of surfaces as well as microbial monitoring.”

However, with regard to an outbreak in future lunar or Martian habitats, it’s impossible to say exactly what might happen because we have yet to return to the moon or send a crewed mission to Mars. But, in considering Clark’s suggestions and the historical examples from the Apollo era, astronauts would likely follow measures similar to what we follow on Earth, like quarantine.