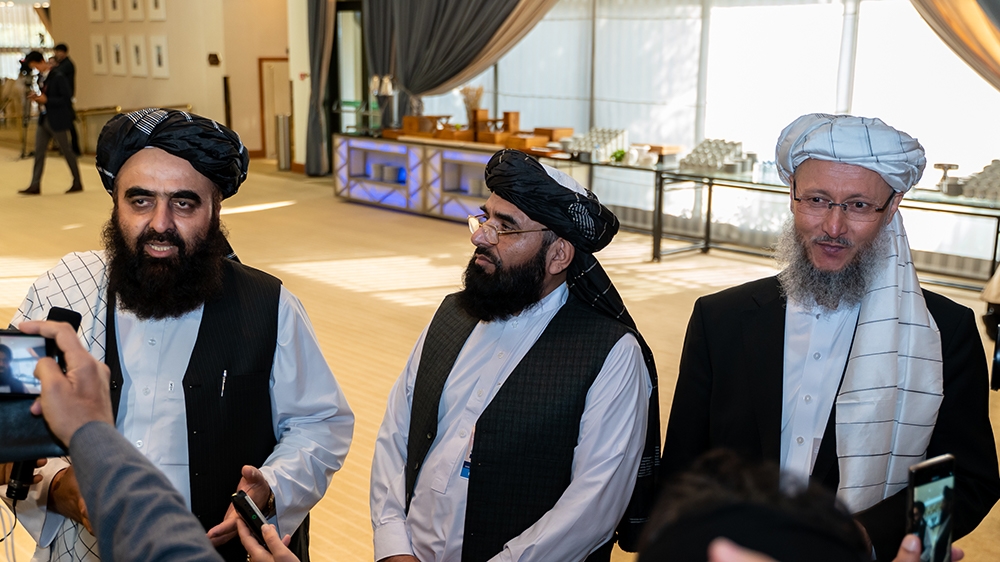 Afghan President Ashraf Ghani's decision to release prisoners in phased manner has come under criticism from the Taliban armed group, which said the move was against the US-Taliban agreement signed in the Qatari capital Doha on February 29. "We reject Ghani's phase release of prisoners," Suhail Shaheen, the spokesman for Taliban, told Al Jazeera on Wednesday. "We…

Afghan President Ashraf Ghani‘s decision to release prisoners in phased manner has come under criticism from the Taliban armed group, which said the move was against the US-Taliban agreement signed in the Qatari capital Doha on February 29.

“We will also make sure at the time of the prisoners release that they are releasing the list of prisoners we have provided them with. Once this is done, we will proceed with the intra-Afghan talks.”

Earlier Shaheen, who is based in Doha, told Reuters that ” conditional release” of the Taliban prisoners is against the accord signed with the US.

The Taliban reaction comes after Ghani issued a decree ordering the release of 1,500 Taliban fighters, which presidential spokesman Sediq Sediqqi said was the first of two phases of releasing 5,000 Taliban prisoners.

Sediqqi wrote on Twitter that the initial release was a goodwill gesture to kick-start peace talks between the Afghan government and the Taliban.

Another 3,500 are to be freed after negotiations begin, on the condition that there is a tangible reduction in violence, according to the four-article pardon decree.

“By releasing 5,000 prisoners in one fell swoop, Ghani would be surrendering the most powerful tool of leverage at his disposal,” Michael Kugelman, senior associate for South Asia at the Woodrow Wilson Center, said.

“Given Kabul’s weak bargaining position to start with, you can’t blame Ghani for opting for a more incremental approach,” he said.

“For Washington, the all-released-at-once option may have seemed like a powerful confidence-building measure. But for Kabul, it’s the worst possible option at a moment when it’s already struggling to find ways to strengthen its tenuous bargaining power.”

However, amid a public feud between Ghani and his main rival, Abdullah Abdullah, it is not clear who would represent Kabul in intra-Afghan talks, even if the Taliban agree to start negotiations.

Ghani’s presidency has been challenged by Abdullah, who has also sworn himself in as the country’s president.

“The squabble over the prisoner release is just the latest reminder of how tough it will be to get this intra-Afghan dialogue off the ground,” Kugelman from the Woodrow Wilson Center said.

“There had already been very real concerns about whether a deeply divided Afghan political class will be able to present a common front in talks, and about whether the Taliban is genuinely interested in negotiating peace.

“The prisoner release issue amplifies the challenges that lie ahead, and the ability of the two sides to resolve it will be an early test of just how much potential there is for this intra-Afghan dialogue.”

Since the US-Taliban deal was signed last month, nearly 40 people have been killed in attacks, with 32 killed on Monday in a gun attack claimed by the ISIL (ISIS) armed group.

By releasing 5,000 prisoners in one fell swoop, Ghani would be surrendering the most powerful tool of leverage at his disposal

The US State Department issued a statement on Tuesday saying that the level of violence in Afghanistan is “unacceptable,” and that, while the Taliban have stopped attacks against the US-led coalition forces and in Afghan cities, the violence in the countryside remains too high.

Despite the political turmoil in Kabul and increased violence on the battlefield, the US has started withdrawing its troops in keeping with the Doha deal. In the first phase, Washington will reduce its presence to 8,600 soldiers, down from the current 13,000.

If the Taliban adhere to their commitments to deny safe havens to armed groups in Afghanistan, Washington will withdraw the remainder of its troops over 14 months, according to the agreement.

At the time of its signing, the US-Taliban deal was touted as Afghanistan’s best chance at peace after 40 years of relentless war while offering the US an exit after nearly 19 years of fighting in the country – its longest war.

President Donald Trump has expressed increasing frustration with the Afghan government and its security forces’ inability to police and manage their own affairs.

The deal has faced hurdles from the outset, despite efforts by Washington’s Special Envoy Zalmay Khalilzad to bring the divided Afghan leadership together.

The US and other international players seem to have backed Ghani’s leadership. Still, Abdullah, with his significant support base, cannot be ignored, analysts have said.

Shereena Qazi contributed to the article from Doha.